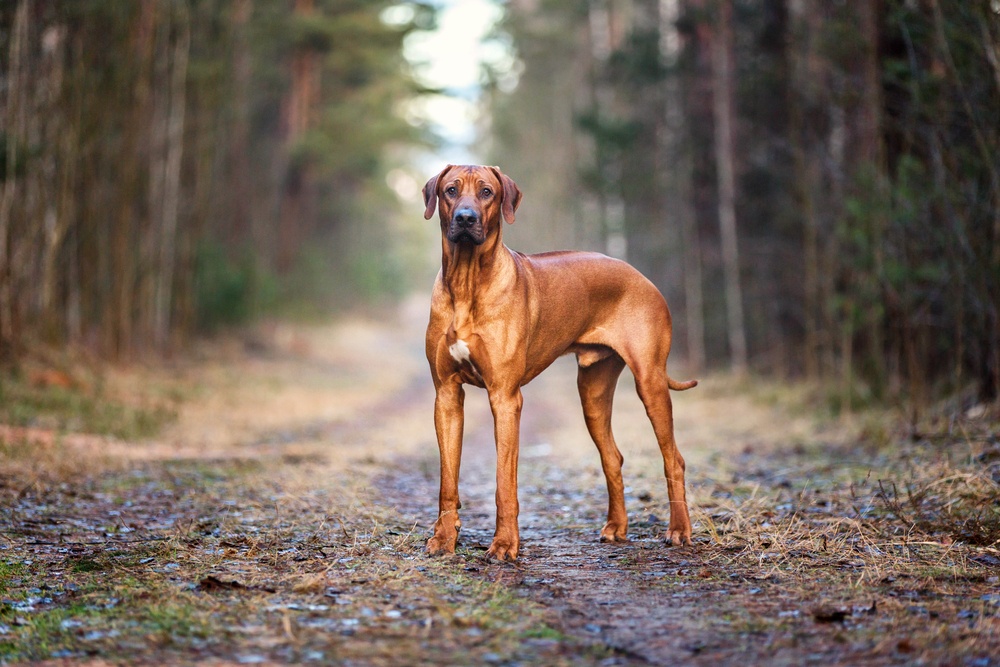 Several dogs are the outcome of breeding done by the Dutch immigrants to Africa. The Rhodesian Ridgeback is one of these pups. They were bred to be a high-quality hunting companion, effortlessly adapting to the harsh climates in their area.

They accomplished their goal with a mix of European and tribal dogs. The Rhodesian Ridgeback was even used as a lion hunter, earning them their other moniker, the African Lion Hound. They hunted game and when at home, spent their time keenly protecting their families, always with a dignified and graceful air.

Rhodesian Ridgeback Puppies — Before You Buy…

The cost of a Rhodesian Ridgeback puppy fluctuates. However, if you are interested in one of these purebred pups in the U.S., you should plan on spending between $700 to $2,000. They can be more or less depending on their pedigree, lineage, and location. A dog that is show quality often costs even more.

In the U.K., the dogs are a little more accessible because their original breeding location is closer. The price often lands between £600 to £800. Again, the better their lineage and the higher the pedigree, the more expensive they are.

Another factor in their price is the reputation of the breeder. It is often worth it to pay for a breeder that might cost a bit more if they have a better reputation. It means that they go the extra mile to take care of their dogs and keep them safe.

To ensure that your breeder is of good quality, check up on them before adopting your puppy. They should always be willing to give you a tour around their breeding facility. Also, ask to look through the health records of the parents for your particular puppy. Verify their maintained health and that your puppy has been checked at least once.

3 Little-Known Facts About the Rhodesian Ridgeback

1. A nickname of the Rhodesian Ridgeback is the Renaissance Hound.

The Rhodesian Ridgeback is nicknamed the “Renaissance Hound” because of all the purposes they effectively and happily serve. They are easy to recognize by a ridge of fur along their back. It is a stripe of backward-growing hair.

They were initially bred in Africa by the Dutch immigrants, the Boers. They were a creation between the native ridged Khoikhoi dog and a collection of European breeds. These breeds included Greyhounds and various Terriers. The Khoikhoi blood gave them increased immunity to localized pests, such as the tsetse fly, and diseases.

The Rhodesian part of their name comes from later in their timeline, during the end of the 19th century, when a big-game hunter named Cornelius van Rooyen arrived in the area from Rhodesia. He bred the lion dogs, or early forms of the Rhodesian Ridgeback, with two ridged Greyhound-esque female pups. The result was a dog even more fearless, quick, and intelligent.

These dogs ended up being the main ancestral line for most of the Rhodesian Ridgebacks that we have today. They are an excellent family dog, a superb hunter without the prey drive to rip game up. They guard successfully, fending off creatures from leopards to raccoons.

Their stamina is admirable, with the ability to gracefully trot along with horses on a long day. Combined, they can serve almost any purpose you train them for, a true Renaissance dog.

2. Errol Flynn, a movie star in the U.S., was one of the first to breed Rhodesian Ridgebacks.

Errol Flynn was an Australian actor who made it big on-screen in America. He was one of the most celebrated and foremost swashbucklers. Flynn achieved global fame during what is now accepted as the Golden Age of Hollywood. He played many romantic roles and was known as a swashbuckler in black-and-white and early color films.

Beyond all of this, he also happened to be the first breeder of the Rhodesian Ridgeback in America. He got his first dogs exported by an English breeder and lovingly raised and bred them on his Hollywood ranch.

This was in the 1930s. He was also known for breeding other dogs, like Schnauzers. Sadly, his line of Rhodesians is now extinct.

3. You can find the Rhodesian Ridgeback on non-vocal dog lists.

With all the jobs that they have, you would almost assume that a Rhodesian Ridgeback would want to “talk” about them or that it would be inherent to them as protectors. However, this is fortunately not true.

Temperament & Intelligence of the Rhodesian Ridgeback

One of the more recognizable characteristics of Rhodesian Ridgebacks is their even temperament. They are strong dogs, with plenty of power, while being ever graceful and dignified. They are extremely loyal and fearless, exercising good judgment before jumping in and potentially doing harm to other people or animals.

They have a sweet disposition, gently taking care of and playing with children. They have a robust frame accompanied by high intelligence. These dogs, although capable of almost anything, are also quite stubborn. They learn much quicker if you start training from a young age, though.

These dogs are typically a good choice for families. They know how to be gentle with children, but they are still not the best choice to have around very young kids. Rhodesian Ridgebacks typically learn how to control their bulk and power at a young age but can accidentally hurt very small children.

If you have a slightly older family, these dogs are wonderful pets. They are loyal and protective without being too aggressive. They love to get a good pat or to go out on walks, hikes, or other family-oriented activities. They do not make excellent outdoor dogs and always prefer to be indoors and keeping an eye on their family.

Rhodesian Ridgebacks can get along with other pets fine if they are properly socialized from an early age. They tend to quickly learn how to behave around other dogs unless they are being treated with aggression. They have an overall gentle disposition and do not need to fill a void by exerting their dominance.

Things to Know When Owning a Rhodesian Ridgeback

Even though these dogs average toward the larger size and get plenty of exercise, they have lean frames and efficiently use their food. They only need around 2-4 cups of food each day, depending on their activity level.

Feed them high-quality food with plenty of protein to keep them as healthy as possible. Divide their meals, so they get fed twice a day. Keep an eye on their weight, and consider changing the amount they receive depending on their exercise, age, weight, and body type.

Ridgebacks are tall dogs, and they tend to use this to their advantage. Watch for counter surfing, and keep fatty human food well out of reach. Since they are so intelligent, you may have to dog-proof where you keep snacks that they have a particular interest in. Their short coats make it easy for you to see where they carry their weight.

Even though their stamina can propel them on for miles and miles, they are only classed as a medium-energy dog. The reason for this is they have a great deal of self-control, and when they aren’t working or playing in a large area outside, they are quite docile.

Try taking your pup to the dog park to combine socialization with exercise. They are always game for any outdoor activity. Take them hiking, swimming, or for long runs. If you enjoy walking or running with your Ridgeback, then aim for around 10 miles each week, trying to get them out for roughly 60 minutes of exercise a day.

It is essential to start training from a young age with these pups. They can be quite stubborn even if they love you. Teach them that you are the leader of the pack, and they will often behave better.

Since they have a high prey drive, it should be in an enclosed area whenever a Rhodesian Ridgeback is off-leash. Train them by giving them jobs and rewarding them with plenty of verbal praise. They are quite food-oriented, so using treats is also recommended. Remember that treats should only make up a 10% maximum of any dog’s diet.

Consider puppy training classes to shape your dog into a well-acclimated adult. They do their best in training as young pups.

Grooming the Ridgeback is most likely the easiest part of keeping them. They require little attention with their short coats and lack of many shedding hairs. Brushing them one or two times a week allows you to maintain a healthy coat and skin.

When they get really dirty, you can give them baths. They should not get bathed too often because it is difficult on a dog’s skin. Use dog-specific shampoo to protect them.

Other than their coat, pay attention to their teeth, ears, and nails. Brush their teeth routinely, at least once a week. Cut their nails as needed. If they get plenty of exercise, it will not be needed as often. Since their ears are floppy, they need to be cleaned weekly and freed of any excess moisture.

These robust dogs are generally healthy. They are prone to certain diseases typical in larger breeds, as well as eye problems. Maintain regular vet checkups to ensure their continued health.

There are no recognizable differences in the personalities of males and females of this breed. Males tend to be slightly larger by a couple of inches and heavier by up to 15 pounds than the average female, weighing around 70 pounds.

Final Thoughts on the Rhodesian Ridgeback

If you need a dog that covers multiple bases, consider a Rhodesian Ridgeback. These pups are powerful dogs, just as full of love and grace as they are muscle. They can hunt, fight, protect, and guard, all while being a lovely family pet.

Having them around very small children is the only family consideration to be aware of. Start training early with these African lion hunters, and you will have a well-behaved companion with a hard work ethic.

Do Dogs Learn From Their Mistakes? What You Should Know!