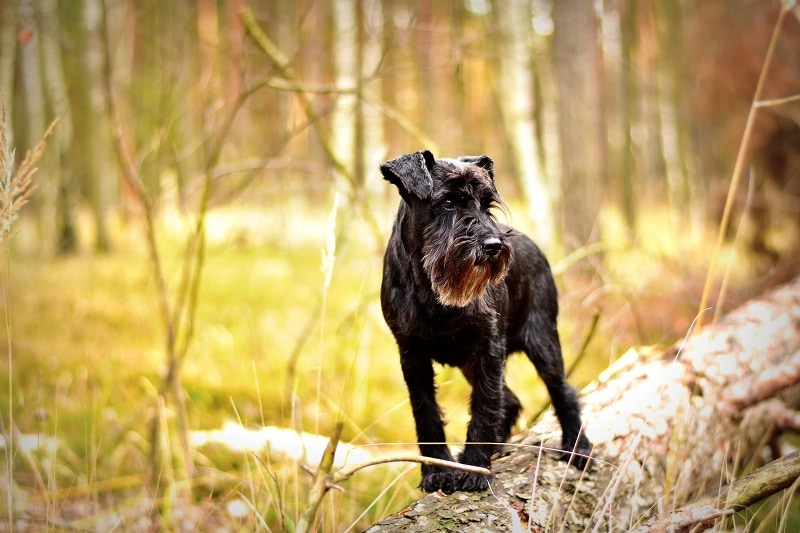 The Standard Schnauzer is a regal, medium-sized dog initially developed in and around Germany before it was formally known as Germany. They are a brilliant breed, well-known for their suitability to various living situations and companions.

These dogs have an aristocratic air about them that makes them appear almost dapper. They are squarely built, with wiry coats and hair that can be cut to suit a plethora of appearances and fashions. From their eyebrows to their bearded whiskers, they are easily recognizable worldwide, although they are most popular in Germany and the UK.

Standard Schnauzer Puppies — Before You Get One

3 Little-Known Facts About the Standard Schnauzer

Standard Schnauzers have good pedigrees and often come with long lineages. They were theoretically bred as a cross between a Gray Wolf Spitz and then, years later, a black German Poodle. This mix developed the wire-haired stock of Pinscher that was similar to the Standard Schnauzers we have today.

This German breed is one of antiquity. We are not sure exactly when they were developed and firmly established as an independent breed. However, we have records of their existence due to their appearance in Rembrandt and Durer’s masterpieces. One even appeared in statue form by Mechlinburg in the 14th century. It was of a hunter who had a Schnauzer crouching at his feet.

Schnauzers were first developing in the neighboring kingdoms of the time, Bavaria and Württemberg. This association with the areas around Germany gave them a reputation for being a German breed.

They were also working dogs that were actively used in both of the World Wars. Some researchers believe that over 90% of the dogs that the Germans used to guard their carts, particularly farmers going to market, were of Schnauzer blood before World War I.

When they first came to America, they were classed in the Terrier group upon receiving recognition from the AKC. However, they were reclassed to a working breed years later to give credence to their working history.

2.  The Standard Schnauzer inspired the breeding of the Miniature and Giant Schnauzers.

3. The Standard Schnauzer requires grooming much more frequently than typical dogs since they don’t shed much hair.

Most dogs are not so well known for their haircuts and groomed styles as the Standard Schnauzer. Although they are widely recognized for their groomed beards and bushy eyebrows on a trim body, this is not their natural state. They are much more fluffy, and their fur can grow quite long if not maintained.

An owner of a Standard Schnauzer will need to shop around for a groomer accustomed to grooming this breed specifically. They need extra attention, and the styling has to be done carefully so the cut is maintained.

Since Schnauzers are hypoallergenic, they do not shed much, meaning that grooming and brushing need to happen more frequently than it typically would for other dog breeds.

Temperament & Intelligence of the Standard Schnauzer 🧠

Standard Schnauzers bring color into their owners’ life, and when you have one of them around, life won’t ever be dull. They are quite sociable creatures, particularly when it comes to other animals and humans they have previously met and feel comfortable around. They have never lost the desire to protect and defend the people whom they love. Having one of them around means having a companion that is always alert to make you feel protected.

These dogs are intelligent and high energy. They need owners who are willing to commit time to their physical and mental activity, or these dogs could become destructive. Schnauzers can also be quite stubborn if they are left to their own devices for too long.

These dogs are often an excellent choice for families. They generally behave well around children and can be tolerant of other dogs if they must.

Socializing Standard Schnauzers from an early age is important if you want a dog that is well-adjusted to meeting other animals and living as a dog that isn’t the only one in the home.

Things to Know When Owning a Standard Schnauzer

Standard Schnauzers need a high-quality diet that will provide them with plenty of protein and a reduced amount of additives. Feeding them properly can help with the quality of their coat and prolonged health.

A Standard Schnauzer should get between 2 and 3 cups of food each day. It is best to spread these out between two meals in a day to avoid indigestion.

Their most significant health problems are diabetes and pancreatitis. That means you need to be careful with the kind of treats that you give them. Do not provide them with sugar at any point if you can help it, since their bodies don’t digest it well, and it often leads to pancreatitis. Keep their diets lower in fats as well.

Standard Schnauzers are medium- to high-energy dog. They need to be taken out for daily walks and do things like hiking and more intensive activities. They should get about 60 minutes of activity each day. You can also take them to the dog park if you want to get them both exercise and socialization.

If you prefer to walk with your Standard Schnauzer, ensure that they go 8 miles each week. That way, you can feel assured that they are fit and healthy.

Training a Standard Schnauzer should begin as early as possible. From a young age of only 8 weeks old, Schnauzers are intelligent enough to start learning good manners. Don’t wait to begin this training, since each day that they age, they become more headstrong and set in their ways. For as much as they look like grumpy older men, sometimes they act like it too!

Grooming your Standard Schnauzer is an absolute must. Their grooming needs often begin to rack up costs because they need to be taken in between every six to eight weeks. Letting it go for too long can mean an even tougher job when they go in or an absolute loss of the style that you were trying to maintain.

Other than taking them to the groomer, you will need to keep their nails clipped. If they get a great deal of outdoor exercise, they might wear down naturally. It is still a good practice to check them every three weeks, though.

Keep their teeth brushed by using a toothbrush on them at least once a week. It is best if you do it more often, though. Keep their ears cleaned out with a soft cloth.

Overall, the fact that this breed has lasted for so long and has a well-maintained heritage as a working breed means they are quite robust. Their health has stood the test of time, and they were never widely bred for physical characteristics that caused them pain or health problems as they got older.

Males often weigh slightly more than females in this breed. However, it can be difficult to tell because it varies from pup to pup.

If you are looking for a sophisticated wing pup, these could be just the dogs for you. With their adorable bushy eyebrows and thick beards, they appear older than they are, even as young puppies. However, it is these features that make them so coveted as a pet.

If you live in the UK or Europe, you will have a better chance of adopting one of these dogs affordably than in the United States.