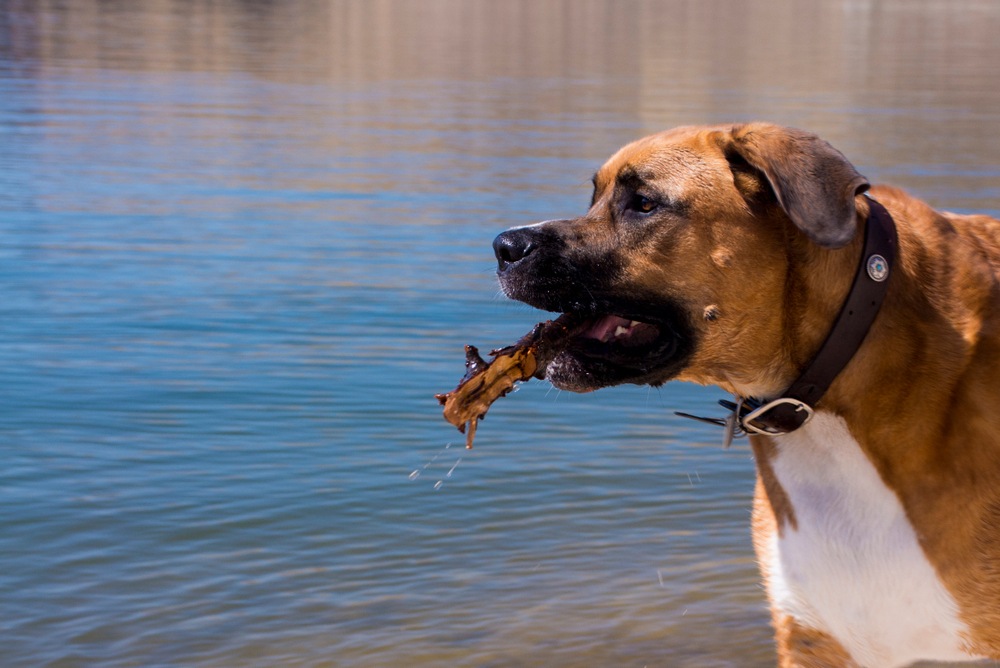 The Saint Dane is a mixture of two of the most famous large dog breeds in the world: the Great Dane and the Saint Bernard. Also called Bernadanes or Great Bernards, Saint Danes are even-tempered, deeply loving dogs that get along exceptionally well with young children, other dogs, and cats.

The first thing you’ll notice about any Saint Dane, even the puppies, is that it’s really, really big. Both males and females can weigh up to 200 pounds, and never less than 150. Saint Danes don’t always understand their own size and strength, but you’ll almost never find a hint of aggression in any of them.

The best way to understand Saint Danes is to trace their parentage. Great Danes were bred for hunting, while Saint Bernards were trained as rescue animals and guard dogs. Combining the traits of both leads to a breed that’s caring and loving, yet also vigilant — great at comforting and cuddling, but also a strong guard dog.

If you or someone you love is considering buying a Saint Dane puppy, this guide will tell you all you need to know about these gentle titans.

Saint Dane Puppies – Before You Welcome One Into Your Family…

Even the youngest Saint Dane puppies are some of the most affectionate family dogs you’ll ever meet, but even so, they aren’t the right breed for everybody.

Owning any giant-classified breed is a lot of work, in spite of their kindness and patience. Not only do they eat a lot more food than smaller dogs — on the order of two cups of kibble, three times a day — they also have shorter lifespans. While Saint Danes aren’t destructive dogs, they do drool and shed more than the average dog.

Before you set out to buy a Saint Dane puppy, make sure that you’ve found a breeder with a good reputation. Don’t worry – it isn’t too hard to distinguish an honest breeder from a puppy mill. Make sure you ask to meet the breeder in person, along with your prospective puppy and its parents.

During the meeting, ask to see health certificates for the puppy’s parents (and grandparents, if available). Don’t be afraid to ask other questions specific to your own home situation. A good Great Dane St. Bernard breeder will have no trouble with any of these requests.

1. Saint Dane puppies should not be over-exercised

Veterinarians agree that while it’s still growing, you should exercise your Saint Dane puppy with long walks and hikes over gentle terrain. Too much running or agility training can prematurely age a Saint Dane’s skeleton, leading it to suffer from joint and bone pain while still young.

Saint Danes drool pretty much constantly, so if you’ve fallen for one, get used to having a towel in every room of your house. They’re also big shedders. With a vacuum, regular brushing, and plenty of towels, it shouldn’t be hard to keep your Saint Dane from ruining your carpet.

3. Saint Danes are OK with being left alone

As long as it has food, toys, and a big yard to run around in, a Saint Dane can entertain itself for hours. This makes them great dogs for anybody who needs to be away from home a lot. When you come back, they’re always happy to see you, but they’re also fine by themselves.

Temperament & Intelligence of the Saint Dane 🧠

Great Danes and Saint Bernards have a lot in common, both being large, relaxed breeds bred for tasks that require a lot of intelligence. Given how much their parents share, it’s no surprise that Saint Danes also tend to be laid-back, affectionate, smart, and trainable. They enjoy playing and positive reinforcement, and really like when you pay attention to them.

Great Dane St. Bernards love relaxing at their owners’ feet or with their head in their master’s lap. Their total lack of aggression, large size, and chilled-out nature makes them perfect therapy dogs. However, with their deep barks and undying loyalty, they can also act as guard dogs.

Saint Danes make ideal family dogs. They’re big and cuddly enough for a child to get lost in, and they love human children. This can be an issue sometimes when a Saint Dane doesn’t know its own strength – they love tackle-hugs, and can knock over smaller humans with a big jump. Just pay attention whenever your child and Saint Dane are playing in the house, and everything will be fine.

Their Saint Bernard ancestry makes them very protective of their people, so it’s common to see Saint Danes acting distrustful of strangers, warning them with deep, booming barks not to threaten their families. That said, it doesn’t take long for a Saint Dane to befriend a new person, so as long as your guests show they aren’t threatening, they’ll be considered honorary pack members before too long.

Saint Danes are perfect for households where pets are already present. They get along well with cats and other dogs. While one of their parent breeds, the Great Dane, is a hunting dog, most Saint Danes take after Saint Bernards and don’t chase smaller animals. If you have problems introducing a Saint Dane into your home, it won’t be the Saint Dane’s fault.

Things to Know When Owning a Saint Dane:

Big dogs weigh as much as most humans, and need a similar amount of food to remain in high spirits. Expect to feed your Saint Dane between four and six cups of dry food a day depending on its weight. We recommend splitting feedings up into two or three meals per day. Remember that puppies will need to eat more while they’re still growing.

To feed your Saint Dane a healthy diet, ignore the front of any bag or can of food, and pay attention to the label. The first five ingredients should all be real protein and fiber sources derived from meats and vegetables. Avoid known unhealthy foods like gluten, by-products, butylated hydroxyanisole (BHA), butylated hydroxytoluene (BHT), and food dyes.

Saint Danes have a lot of energy for big dogs, yet they’re also pretty lazy when left to their own devices. As such, they’re prone to obesity, and so should be exercised for at least 45 minutes every day to keep their weight at a healthy level.

Remember not to over-exert puppies – take them on walks in the park and slow bike rides, or let them run around in the backyard. At about one year old, you can start involving your Saint Dane in obedience and agility lessons, which make use of both its energy and its prodigious intelligence.

Saint Danes need a lot of space to run around in, and thus aren’t the best dogs for people living in apartments. The more backyard you have, the better.

One last note: Saint Danes can easily get dehydrated and suffer from heatstroke in hot weather. When playing in the summer heat, make sure your Saint Dane drinks water and takes regular breaks in the shade (it shouldn’t need much encouragement).

We’ve mentioned that Great Dane St. Bernards are highly intelligent dogs. In addition to being smart, they also love to please their owners, a combination that makes them extremely easy to train.

Saint Danes are sensitive to their masters’ anger. Shouting and reprimanding scares them, and is much more likely to stress them out than it is to teach them desirable behavior. Instead, establish firm and consistent consequences for actions. Your Great Dane St. Bernard will quickly learn that sitting, staying, and obeying gets them pats and treats, while jumping on people or failing to listen means no treats and playtime is over.

Saint Danes need to be regularly brushed to keep them from shedding constantly. Brushing should be a daily activity, but since you’ll never get all the hair, be prepared with a broom and a vacuum cleaner.

Because they’re such big dogs, it’s hard to get a Saint Dane to sit still when it doesn’t want to be groomed. The best way to keep brushing time from becoming a hassle is to teach it to be all right with grooming when it’s still a puppy. Saint Danes don’t respond well to suspicious new things, so the earlier they get used to being brushed, the better.

Unfortunately, Saint Danes share their parent breeds’ susceptibility to disease. They have relatively short lifespans, living a maximum of 10 years at their healthiest.

There’s a lot of overlap between the heights and weights of male and female Saint Danes. Fully-grown males range from 25 to 32 inches tall, compared to 23 to 30 inches for females. While males weigh between 160 and 200 pounds, female Great Dane St. Bernards range from 155 to 195. As you can see, there’s not much difference.

Temperaments overlap as much as sizes do, but there are slight behavioral differences between male and female Saint Danes. A female’s first instinct when she detects distress is to comfort the afflicted human with nuzzles and hugs. A male is more driven to seek out the danger and might wind up more agitated, though it makes him a vigilant guard dog.

Saint Danes might be the perfect form of the gentle giant dog. They’re friendly, cuddly, non-aggressive, easy to train, and completely chill no matter who else lives in the house.

If you’re going to adopt a Great Dane St. Bernard, you should be prepared for high-maintenance grooming, and understand that it isn’t likely to live longer than 10 years. But if you want a wonderful 10 years with a wonderful dog, you might fall in love with a Saint Dane.

How Much Does an Old English Sheepdog Cost? (2022 Price Guide)