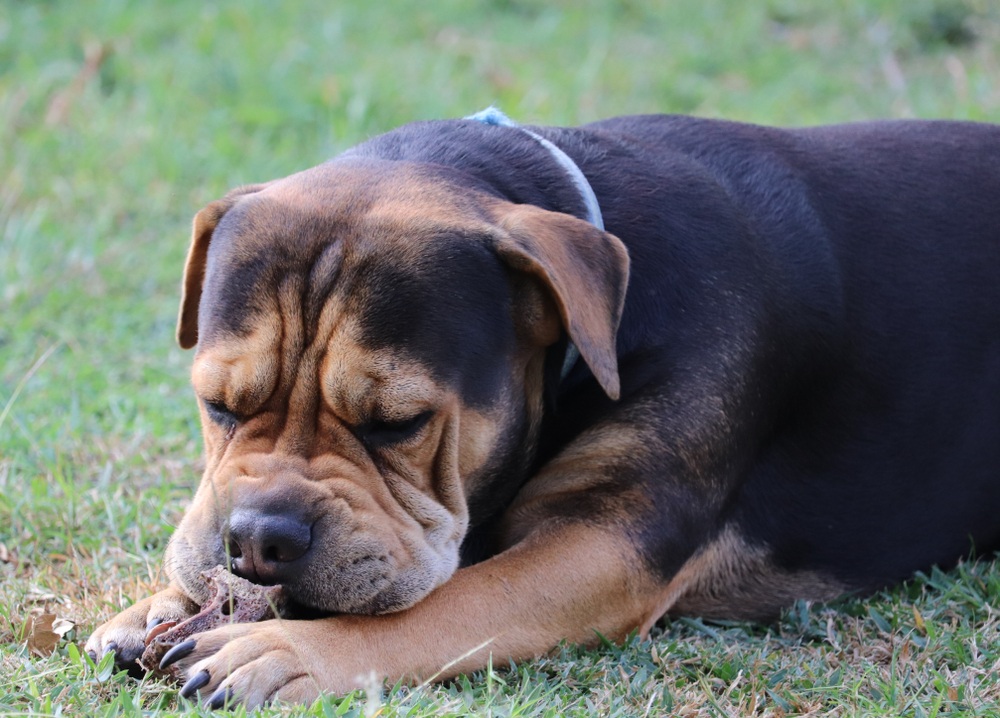 A fascinating mix of the exotic Chinese Shar Pei and the ever-popular Beagle, the Sharp Eagle (sometimes spelled Sharpeagle) combines hunting instincts from two breeds into one small but powerful package. Powerfully built and quick-witted, they’re a sometimes-stubborn dog that demands a firm commitment to training.

Once you’ve bonded with a Sharp Eagle, though, there are very few dog breeds that require less care and attention to stay happy. Highly adaptable and comfortable spending time on their own, the Sharp Eagle can be a wonderful companion and watchdog to many different types of people.

Sharp Eagle Puppies – Before You Welcome One Into Your Family..

A relatively recent designer dog breed, the Sharp Eagle can often display conflicting characteristics within a litter of puppies — or even within a single dog. This is due to the wildly different personalities of its two parent breeds, the Shar Pei and Beagle. To better understand whether a Sharp Eagle may be the right dog for you, let’s look at each of its ancestral breeds in more detail.

The Shar Pei has a long history in China, beginning as a farm dog before being bred and trained through generations to hunt and, eventually, fight. Originally put in charge of guarding farms and livestock from intruders and wild animals, the Shar Pei has been bred for centuries to maximize its alertness and prey drive.

As other, more aggressive dog breeds were introduced to China, the Shar Pei began to lose its place in farms and illegal fighting arenas. In the early 1970s, it was speculated that less than a dozen of the breed may have been left alive — sparking an interest in some dog breeders to renew this once-venerable breed.

Now, after a few short generations of interbreeding, the Chinese Shar Pei has retained much of its alertness and prey drive, but now has fewer and less severe aggressive tendencies.

The Beagle, another breed with a long history, has enjoyed vastly different purposes throughout its history of hunting hare and providing companionship to British households. Wildly popular since the early 1900s, these miniature foxhounds have an incredibly keen sense of smell and rather curious, inquisitive natures.

Beagles are possessed of a gentle disposition and even temperament which helps to even out the more undesirable characteristics of the Shar Pei. Because of the difference in the basic temperaments and purposes of their two parent breeds, Sharp Eagles tend to take after one breed or the other more strongly. Look for specific personalities from individual puppies to find the perfect one for your home.

1. Early Socialization is Key to Integrating Them with a Family

Coming from two long-lived breeds, the Sharp Eagle is an adaptable dog — but also one that tends towards its sharp hunting instincts. They’re intensely protective of anything that they come to identify with, so introducing them early in their lives to children and other pets can make for easier integration into your family. Once they’ve decided that someone is “their person,” they’ll do anything in their power to protect them.

2. Puppies Will Take More Strongly After One Half of Their Breed Mix

While some designer dogs end up with a personality that incorporates the best and worst elements of both breeds involved in the mix, Sharp Eagles are almost always seen to identify strongly with the temperament of just one side of their heritage.

Those dogs that align with the Shar Pei often prefer staying around the home, are slightly more aggressive, and require little exercise. Sharp Eagles who trend towards their beagle side, though, will naturally be more curious and inquisitive, but prone to wandering away from their homes.

3. Their Loose Skin Can Help Keep Them Safe in a Fight

Originally bred to defend farms from wild boars in Southern China, the Shar Pei’s loose skin is an adaptation that allows them to wriggle away from teeth and tusks. While this is no longer a concern for most domestic animals, it’s a vestige of their heritage as fighting dogs that can save them from harm in rural settings.

Temperament & Intelligence of the Sharp Eagle 🧠

At times aloof, occasionally aggressive, and often curious, the Sharp Eagle displays an odd blend of character traits that can differ from dog to dog. While quite intelligent, they are also possessed of a serious stubbornness that can make them difficult to train.

Of the many breeds of designer dogs available today, the Sharp Eagle requires more socialization in its early life than almost any other breed. They readily form familial bonds early in their life and will be intensely protective of anything and anyone they’ve bonded with.

Given the proper introduction to your home as a puppy, the Sharp Eagle can be an excellent addition to a family. They require a significant amount of time just getting to know the people they’ll be living with before warming up to them — but once a Sharp Eagle settles into its new home, it will be loving and protective of everyone in it.

Descended from two breeds that both possess incredibly vigorous  unting instincts, the Sharp Eagle can be trained to get along with other dogs, but should not be kept as a pet with prey animals. Cats, rabbits, mice, and birds can all come under the sudden scrutiny of an angry Sharp Eagle, who might aggressively pursue them and cause them serious harm.

Things to Know When Owning a Sharp Eagle:

Is the Sharp Eagle sounding like the right dog for you? If so, consider the following topics before deciding whether you have the time, energy, and finances necessary to properly care for one.

Sharp Eagles have no special dietary requirements and will generally get along well with two cups of dry food split into two meals per day. Expect a monthly feeding cost of between $35 and $45, depending on the brand of food your vet recommends.

The Shar Pei in a Sharp Eagle will often incline them towards extended bouts of laziness and lounging around the house, making them an excellent dog for owners without much time for exercise. Requiring up to an hour a day of exercise, they’ll happily take walks around the block or in your backyard — but don’t expect them to be enthusiastic about it.

Once you get past a Sharp Eagle’s initial stubbornness, training becomes quick and easy. They’re a very willful dog breed and will likely resist your initial attempts at training. Just stick with it, providing consistent training cues, and they’ll eventually take to it readily.

A Sharp Eagle’s coat requires very little in the way of grooming, and a weekly brushing will usually keep their fur in tip-top shape. Baths should be infrequent, but with special attention given to their wrinkles — possible sites of mold, mildew, or infection grow if left damp for too long.

The Sharp Eagle generally enjoys a robust constitution and vigorous health but can be prone to the following defects because of its purebred heritage:

You’ll seldom see pronounced differences between male and female Sharp Eagles, with the exception of the female’s greater tendency towards gaining excess weight. If you’re looking for a dog with a certain sort of temperament, it’s best to consider each puppy individually, as personalities can vary widely from dog to dog in this breed.

Though the Sharp Eagle is a rather new and generally untested designer breed, any dog that comes from two such long-running breeds as the Shar Pei and Beagle is bound to be able to find its place in homes around the world. Perfect for people who aren’t always around the house, or don’t have plenty of extra time for exercise and play, the Sharp Eagle can become a long-time companion to anyone willing to build a relationship with them.