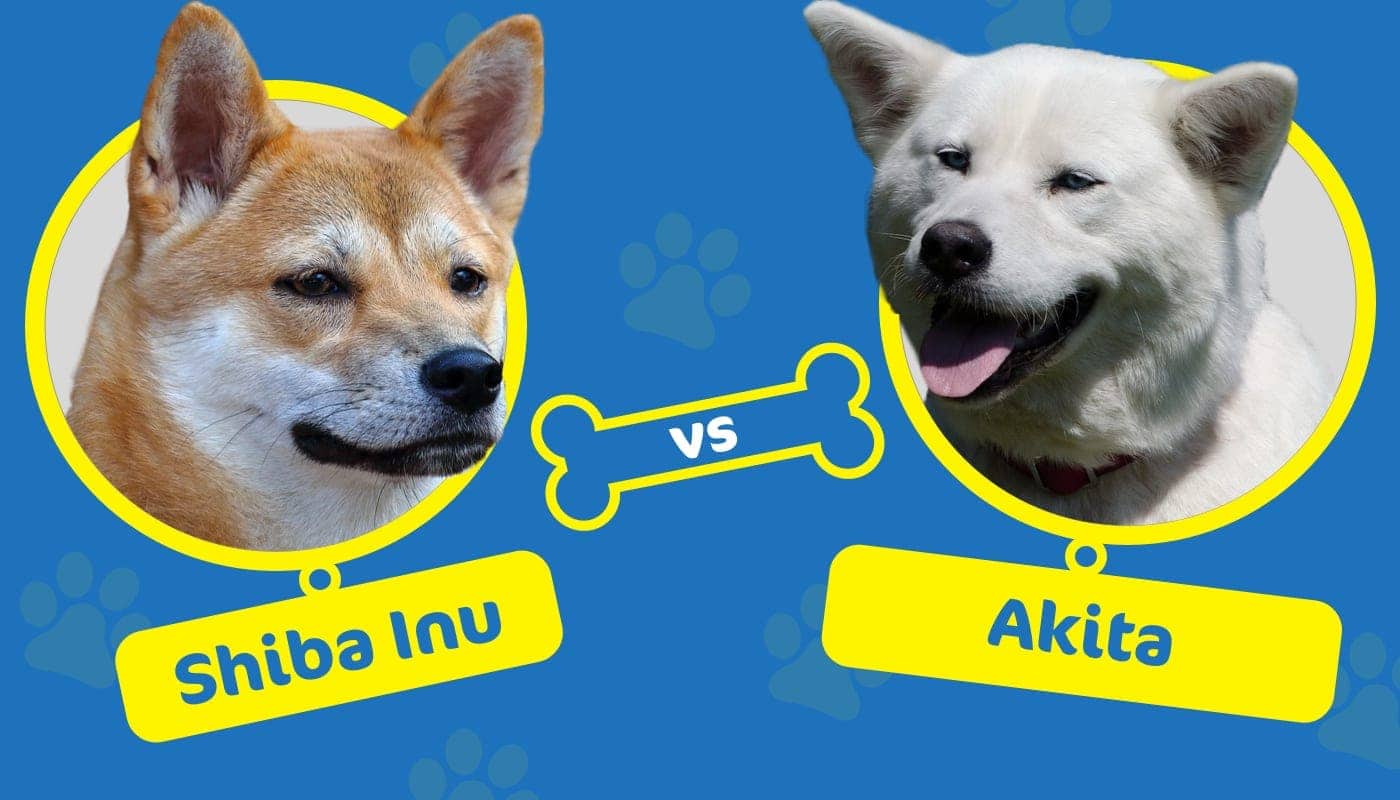 You’ll find that the Shiba Inu and Akita share a lot of qualities. That’s because both are Spitz-type breeds that come from Japan. Both have a history that includes hunting, albeit for different purposes. They even look similar with personalities to match. Considering the two means drilling down to the subtle variations between them.

We’ll explore both the similarities and differences between the two. We’ll highlight the traits that may sway you one way or another when choosing between the pair. You’ll learn about each one’s place in Japanese history that may also provide some strong talking points. In the process, you’ll gain some knowledge about this class of breeds.

Akita Inu vs Shiba Inu: At a Glance

Here are the quick-fire facts that you need about each of these gorgeous breeds.

The Shiba Inu’s history goes back over 9,000 years. Both this pup and the Akita share a common ancestor, the Jomonjin dog. That means you’ll see a lot of similarities between the two. The differences lie with size and the role they served for people. The appearance between the two has the distinctive curled tail and short, pointy ears.

The original Jomonjin dog ended up in three different size classes, thanks to selective breeding. The Shiba Inu occupies the small one. However, that doesn’t take anything away from his muscular stature. The official American Kennel Club (AKC) standards call for a dog that is 13–17 inches tall at the withers or shoulders. The pup is on the smaller size, weighing in at 17–23 pounds.

The Shiba Inu is highly adaptable. He can do well in any household, even in an apartment. He is moderately cold-tolerant, given his background. He is somewhat reserved with strangers, although he is affectionate with his family. That’s one of the trademark qualities of this breed and others in the Spitz group.

This pup is sensitive to harsh reprimands. Positive reinforcement is the best way to connect and bond with this dog. He tends to get attached to his owner and isn’t especially tolerant of being alone. He has a moderately high tendency to bark, which you’ll need to rein in early. Early socialization is vital, considering that this breed isn’t the most dog-friendly.

The Shiba Inu is an intelligent dog. He will pick up new tricks and commands quickly. However, he is an independent pup that may pose a challenge for first-time pet owners. While he’s friendly enough, he still has a mind of his own. You will likely need to persuade him that obeying is a good thing. Consistency and positive reinforcement are the keys to reaching him.

His hunting background means that the Shiba Inu has a strong prey drive and wanderlust potential. He isn’t the best choice for a household with other pets. He’ll likely chase the family cat and not get along the best with another dog. Early socialization can help overcome these obstacles.

The Shiba Inu is a challenge when it comes to routine maintenance because of how much he sheds. Break out the vacuum cleaner when you invite this pup to your home. Regular brushing can help keep it under control. You should also check his ears occasionally because of a risk of ear infections. Plucking the hair from them is an effective way to control this issue.

The Akita has a presence. He catches your eye immediately. He has an unmistakable independent streak that won’t be tolerant of other pets in the household. He shares a lot of the same personality traits with the Shiba Inu, given their common ancestor. However, there are some significant differences between the two breeds that are worth exploring.

This pup has a longer history in the United States than the Shiba Inu by about 20 years. Both breeds suffered the wrath of World War II. The conflict nearly wiped out the two of them. Enthusiasts kept them alive and made their entry into America possible. That act ultimately saved them. After all, there isn’t a lot not to like about these dogs.

The Akita belongs in the large size of the Spitz-group breeds. He gets 24–28 inches high and weighs between 70 and 130 pounds. Despite his size, this pup is surprisingly long-lived for a dog of his size, surviving up to 13 years. Like the Shiba Inu, he is a muscular dog with powerful legs and a large head. He also has pointy ears and a broad muzzle with deeply set eyes.

The Akita is affectionate with his family, but with others, not so much. He is also a loyal pup that will guard your home and family. Early socialization is imperative because of his reserved temperament. He’ll make a better pet if you expose him to other people while he’s still young and impressionable. He sometimes is vocal, which is something else you’ll need to control.

While the Akita is intelligent, he is also independent, which can make training a challenge. He is not a dog for the first-time pet owner as a result of it. Because of his strength, it’s imperative to start early, given his adult size. Positive reinforcement and consistency are the keys to success with this pup. He is a sensitive pooch and won’t take well to harsh reprimands.

We suggest using treats as a training aid to overcome his willfulness. However, make sure that they don’t make up any more than 10% of his food intake.

The Akita doesn’t shed a lot year-round. Instead, he loses his undercoat twice a year. Like other breeds in the Spitz family like the Samoyed, he does a decent job of keeping himself clean. However, you should plan on brushing him at least once a week to prevent mats from forming. Likewise, check his ears often to keep them clean.

Difference Between Akita and Shiba Inu

These two breeds are quite similar, given their common origin. Both of them had challenges surviving the ravages of World War II before enthusiasts brought them to the United States. That saved the Shiba Inu and Akita from extinction. Being served is a trait that both dogs show and is a product of their similar backgrounds.

Size, of course, is the primary difference between the two breeds. Both are strong and muscular animals for their stature. That explains, in part, their relatively healthy nature. Despite their varying sizes, the Shiba Inu and Akita should be screened for hip and elbow dysplasia. Reputable breeders will ensure that these tests are done.

Since the Shiba Inu is smaller, he will mature more quickly than the larger Akita. It’s essential to feed them a food meant for a breed of their size with either one. We also suggest monitoring their body condition to prevent obesity.

Both breeds have a higher energy level. The Akita is often more intense and playful than the Shiba Inu. He also is more active, requiring more exercise. The former is less kid- and dog-friendly than the latter. Size comes into play, too. You should supervise young children with an Akita in the home. Nevertheless, both dogs are affectionate with their families.

The Shiba Inu and Akita are intelligent dogs. The former is a better choice for first-time pet owners than the latter. He is somewhat less stubborn and willful than the latter. The Shiba Inu is also less sensitive than the Akita, which will also make training easier. Both breeds have a tendency to be nippy when you, which you’ll need to manage early to prevent it from becoming a problem as an adult.

The Shiba Inu has the edge when it comes to grooming. The Akita, with his thicker coat, requires more care. Both breeds are relatively healthy. However, routine vet examinations are essential. The Shiba Inu has a higher propensity for allergies. Therefore, it’s vital to check his coat regularly for signs of irritation. On the other hand, the Akita tends to gain weight if he doesn’t get enough exercise.

Shiba Inu vs Akita: Which One Is Right for You?

The Shiba Inu is the more adaptable of the two dogs. He can take to apartment living quite easily. The Akita is not. He prefers a large, fenced-in yard. As you may expect, both breeds are tolerant of the cold and less so of hot weather. They will handle winter walks well. The two have a strong prey drive and high wanderlust potential. Neither are dogs that you should let off-leash.

The question, therefore, of which dog is right for you boils down to size and space. While they will tolerate children, they’ll do better in a household with older children and adults. In any case, both breeds are excellent choices for the pet owner who can commit to early training and socialization. They are handsome pups with many pleasing traits for the right family.

How to Firm Up Your Dog’s Poop