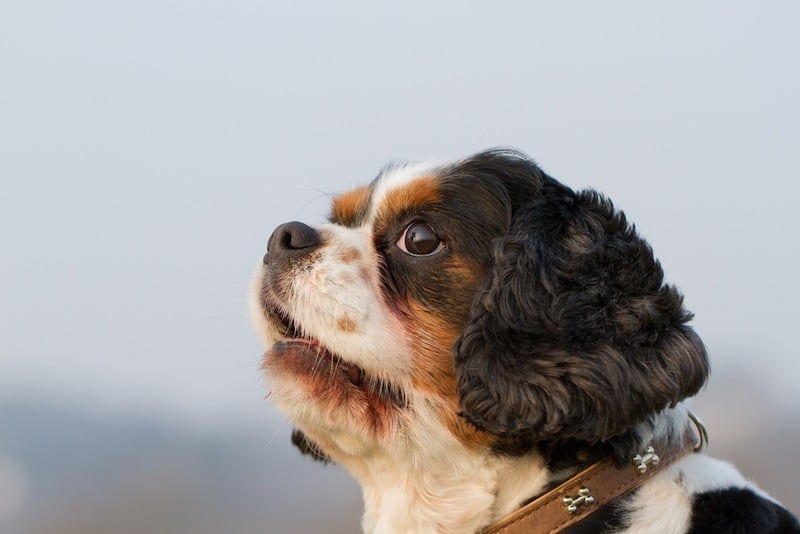 Both the Cavalier King Charles Spaniel and the Yorkshire Terrier are adorable dogs with a loyal following for a good reason. They are affectionate pups with lots of love to give and share. The Cavalier brings exuberant friendliness to the mix, while the Yorkie adds high energy and boundless playfulness. Their smaller size makes them an excellent choice for apartment dwellers.

The King Charles Yorkie is a relatively new hybrid. Both parent breeds, on the other hand, have a long history as companions. The Cavalier is a gentle dog with a brush with royalty in its past. The Yorkshire Terrier, by contrast, served as a hunter of rats and other pests in the mines of England. Together, the King Charles Yorkie is a delightful pet that will be sure to make an excellent addition to your household.

Researching a breed—or two in this case—is a vital part of pet ownership. The personalities of dogs vary as much as it does in people. Both parents have a moderate tendency to bark. Think of it this way. They are loyal companions, and therefore, protective of their families. That makes them decent watchdogs because no one is going to approach your home without you knowing it first.

The gentle nature of the Cavalier is an excellent buffer to the feisty and sometimes stubborn Yorkie. Early socialization is essential to curb any bad habits before they become a nuisance. The terrier in the King Charles Yorkie brings a moderate prey drive and wanderlust potential. It’s not surprising given their original purpose. We suggest keeping him on a leash to tame that instinct.

Both parent breeds are popular, according to the American Kennel Club (AKC). Crosses with the Yorkshire Terrier are equally as trendy. Therefore, you can expect some competition for buying a puppy, along with the accompanying price. You’ll likely pay at least $800 and upward of $2,000 for a pup from a reputable breeder.

1. The Yorkshire Terrier Is the Result of the Crossing of Three Breeds.

The history of the Yorkshire Terrier is a bit murky. We do know that he descended from three, now-extinct breeds. They included the Waterside Terrier, Old English Terrier, and the Clydesdale Terrier. Their original name was the Broken Hair Scotch Terrier.

2. A £25 Reward Brought the Cavalier King Charles Spaniel to America.

The Cavalier King Charles Spaniel that we know today descended from the toy spaniel of Renaissance times. Like many breeds, it evolved over the years. Then, in the 1920s, wealthy American Roswell Eldgridge made it her mission to find the “Bleinheim Spaniels of the Old World type” with a £25 reward. The rest, as they say, is history.

3. Present-Day Yorkshire Terriers Can Trace Their Origins to One Special Sire.

According to the Yorkshire Terrier Club of America, Huddersfield Ben (1865-1871) is the original Yorkie and father to most of today’s show-quality pups.

Both parent breeds bring keen intelligence to the King Charles Yorkie. There is also their friendliness, which makes them easy to love. It certainly helps that they are so darn cute, too, with his adorable brown eyes. As we mentioned earlier, there is also that terrier stubbornness that is part of the mix. Despite that, this pup wants and needs your attention.

The King Charles Yorkie is prone to separation anxiety, a trait he gets from both of his parents. Bear in mind that a pup with these tendencies will engage in undesirable behavior if he senses you’re ignoring him. He is not a pooch to keep in a crate all day while you work. He’d much rather be curled up next to you.

The King Charles Yorkie is well-suited for family life, especially if the Cavalier is the dominant parent. This pup wrote the book on showing affection. That’s also true with children. Whereas the Yorkshire Terrier isn’t as kid-friendly, the Cavalier will lavish them with love and kisses. We’d suggest teaching your kids to be gentle with this pooch because of his smaller size.

Socialization with other pets is a must-do. The Cavalier enjoys the company of other pets, dogs and cats both. He has enough love for everyone. The Yorkie is a different story. He’s not as open to enjoying his space with other animals. There’s also that latent prey drive to contend with as well. This dog will do best if he is raised with a companion instead of springing another animal on him later in the game.

Things to Know When Owning a King Charles Yorkie:

As you’ve seen, there is a contrasting picture between the Cavalier and the Yorkie. Both are equally wonderful pets on their own. A cross can vary, depending on which traits are dominant. You can think of a puppy as a blank canvas. You can set the tone to encourage the characteristics and behaviors that are best suited for you and your family. Let’s delve into some specific points about this hybrid.

The most challenging aspect of owning a King Charles Yorkie is monitoring his diet. As a puppy, you must encourage him to eat. He thrives best with three small meals, evenly spaced during the day. That will keep his blood sugar stable and avoid hypoglycemia, a potentially life-threatening condition. However, there is also a flip side to this advice.

The Cavalier has a tendency to gain some extra pounds. His cuteness is probably a factor with it, too. His playfulness, combined with the Yorkie’s energy, can help prevent an issue. Nevertheless, we recommend monitoring his weight and adjusting his diet accordingly.

A daily walk is an excellent way to ensure that your King Charles Yorkie stays healthy and gets enough mental stimulation to control bad habits. That’s especially necessary if you live in an apartment. Depending on his size and temperament, an occasional visit to the doggie park will help keep him in shape. It’ll also improve his canine social skills. Remember that a bored dog is often destructive.

The King Charles Yorkie is relatively easy to train. The thing you must remember is that both parent breeds are sensitive to stern reprimands. Therefore, the best way to work with these pups is with positive reinforcement and praise to encourage proper behavior. We’d also recommend saving the treats for training purposes to keep a handle on his weight.

While this pooch doesn’t shed a lot, the King Charles Yorkie’s coat requires regular maintenance to keep it tangle-free. Their fur resembles hair and is often silky and fine. Depending on the dominant parent, it can be long, too. You may find maintenance more manageable if you give him a puppy cut, instead. It’ll save you a lot of time and effort in the long run.

The more popular the breed, the more likely you will see health issues, often due to inbreeding. However, reputable breeders will do the recommended health screenings to avoid more common conditions. While the parents are relatively healthy dogs, there are a few things you should look out for when considering a King Charles Yorkie.

The choice of a male or female is a matter of preference. Both sexes of the King Charles Yorkie make delightful pets. They are close in size and weight for either one, too. As always, we urge you to neuter your dog if you don’t plan on breeding him. Check with your veterinarian about timing and post-operative care.

The King Charles Yorkie is an enjoyable dog that is sure to please you and your family with his abundant affection and friendliness. Early socialization and consistent training are the keys to success with this pooch or any pup you own. This one makes it easy to love him and give him the attention that he needs. We dare you not to fall head over heels with this cutie.