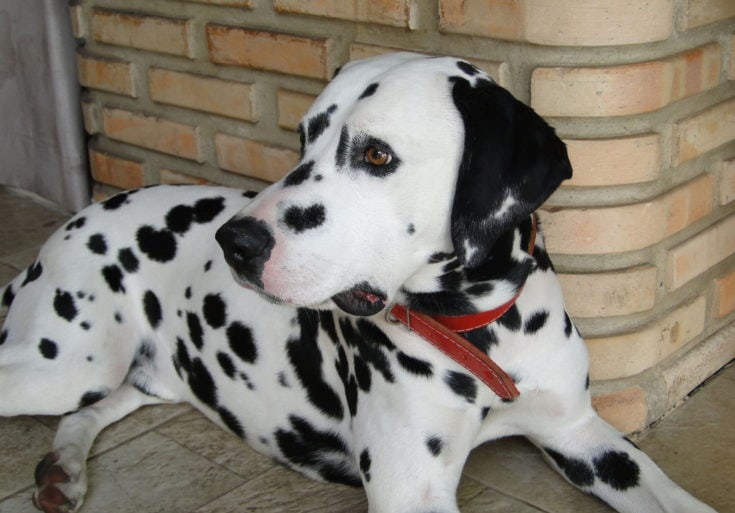 Was it your childhood dream to own a dog named “Spot?” While there’s no law saying you can’t give this name to a Labrador Retriever or German Shepherd, wouldn’t it be more appropriate for a dog with spots of its very own?

But wait — did you know that there’s only one dog breed with genetically spotted fur? (Hint: you’ll find it at the top of our list!) Instead, most spotted dogs have coat patterns called ticking, speckling, or flecking.

Genetics aside, there are numerous breeds with spots on their skin, fur, or both. We think all of these breeds are worthy of the name “Spot.” Here are some of our favorites.

On a list of spotted dog breeds, it would be a crime to start with anything but the Dalmatian. In centuries past, the Dalmatian accompanied horsedrawn carriages belonging to nobles and miscellaneous travelers, guarding the horses and cargo. Today, this standout breed is most famous for its role as a firefighter’s companion and Disney movie star.

Because of the breed’s history, the Dalmatian still has strong guarding tendencies even as a household pet. They tend to be unsure around strangers and prefer to act as guard dogs rather than social butterflies. However, in the comfort of its family, the Dalmatian is incredibly loyal, intelligent, and affectionate.

The Brittany might not be the first breed to come to mind when thinking of spotted dogs, but its patterned coat is a trademark of the breed. Its spotted coat, officially known as a roan pattern, closely resembles a cow’s and is adorned with orange- or liver-colored patches.

Bred as hunters, these dogs have the energy to keep up with even the most active households. Whether used as a hunting companion or not, the Brittany requires ample mental and physical stimulation to stay happy and healthy. If you bring one of these beautiful pups into your home, consider enrolling them in a canine sport like agility or dockdiving.

While the breed’s lack of hair is a godsend in some ways, it can also pose a handful of problems for the dog itself. For example, the breed is prone to sunburn and must be bundled up in cold weather. If you’re willing to take care of this dog’s unique needs, though, it can make an incredibly playful and loving pet.

If you thought this gorgeous spotted dog originated from Australia, think again. According to most reputable sources, the Australian Shepherd likely emerged on 19th Century ranches in the United States! However, the breed likely had some ancestors that hailed from the island nation.

Not all Australian Shepherds have spots, but the prevalence of the merle gene in this breed means that the vast majority are. The merle gene affects how color is expressed in a dog’s coat, leaving them with spotted fur and striking blue eyes. Outside of their aesthetic beauty, Australian Shepherds make excellent companions for those who want a high-energy, hard-working dog.

While the first known reference to the Setter, then called the “Setting Spaniel,” actually comes from France, the English Setter truly settled into its identity in 15th Century England. The breed quickly became one of the most skilled gun dogs, with a separate hunting strain known as the Llewellin Setter emerging in the 18th Century. Today, they serve as household pets, competitive sporting dogs, and hunting companions.

The English Setter’s coat is uniquely described as belton, referring to the speckled mixture of white, yellow, orange, liver, and other hues. While this breed’s face and back are fairly sleek, it typically boasts long, curly fur along the chest, stomach, ears, legs, and tail. Regular grooming is key to keeping your English Setter healthy and comfortable.

Spots aside, the Bluetick Coonhound boasts a unique coat. Its fur is made up of tan, black, and grey spots — all atop a base layer of ticked blue-gray fur. Even if you haven’t seen a Bluetick Coonhound in the area, you’ll likely know there’s one in the neighborhood by its melodic nighttime baying.

Like most hounds, the Bluetick Coonhound is intelligent and driven. Because of their extensive history as hunting companions, it’s important to consider the breed’s prey drive before introducing it to a household with smaller animals. Once it forms a bond with its family, however, this dog is incredibly affectionate and loyal.

No, not all Great Danes have spots. With that said, there’s one recognized coat pattern that makes the gigantic breed resemble a Dalmatian. The Harlequin-coated Great Dane has a white basecoat with even black patches across its entire body.

While it should be obvious, committing to a breed of this size is a unique feat. Not only do you need the space to accommodate such a large creature, but you also need the training know-how to keep this breed under control. With a little work and plenty of socialization, though, the Great Dane can grow into a well-rounded canine citizen.

Of course, this list includes only the most popular spotted breeds. While the Dalmatian is the only breed with an officially spotted coat, there are numerous other dogs that have spot-like coat patterns.

Some other spotted breeds you might want to check out include:

And, again, many dogs can develop one-of-a-kind spots depending on their genetics — even when the breed isn’t known for having a spotted coat. Really, there’s no limit to the potential “Spots” out in the world!

Do you own any of these spotted breeds? Is there a standout breed you think we overlooked? Let us know in the comments!