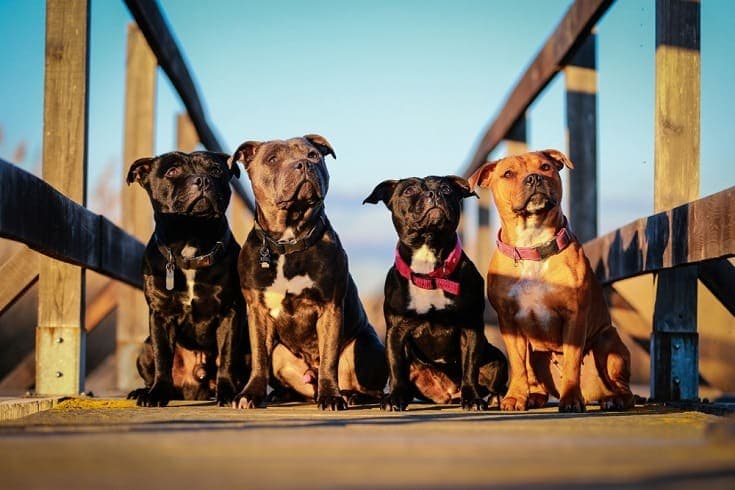 Bred originally in the 1800s from the old-fashioned Bulldog and the now extinct English White Terrier, the Staffordshire Bull Terrier is a medium-sized short-haired terrier that is one of several bull and terrier breeds that can trace its history back to the English blood sports of bull-baiting, bear-baiting, and dogfighting.

After these activities were banned in England in 1835 and attitudes to dog fights changed, the Staffordshire Bull Terrier was refined through years of careful breeding to be the family pet and companion dog that we know today.

The breed was first imported in the United States in the 1880s and has since gone on to become a trusted, brave, and resolute companion to thousands of American families.

Staffordshire Bull Terrier Puppies — Before You Get One

The SBTCA maintains a list of registered breeders from around the country, which is a great place to start if you are looking to buy a new Staffordshire Bull Terrier puppy.

Unfortunately, due to their bad reputation and the nature of some of their owners, far too many Staffordshire Bull Terriers find their way into dog shelters. So, if you are happy to adopt a slightly older dog, you may want to consider rescuing one from a shelter.

Following their arrival in the United States in the 1880s, breeders developed a taller and heavier version of the dog, which is now known as the American Staffordshire Terrier, or AmStaff. Both breeds have since been recognized as individual breeds by the American Kennel Club.

Unfortunately, a small minority of owners are attracted to them because of their fighting background and go out of their way to abuse their dogs and turn them into mean, snarling, and aggressive animals. In truth, any dog that is abused can become aggressive, and unfortunately, the minority of people have given this breed an entirely undeserved bad reputation as an aggressive dog.

3. The Staffordshire Bull Terrier was not recognized in the U.S. until 1974.

Despite having been in the country since the 1880s, the Staffordshire Bull Terrier was not recognized as a breed by the American Kennel Club until 1974. Even in their home country, it wasn’t until the 1930s that the U.K. Kennel Club accepted them as a registered breed.

Staffordshire Bull Terriers are tough, strong dogs that have an affectionate and loving nature. They are well known for their love of people, and they make dependable, friendly, and tolerant companions that are totally trustworthy.

Staffordshire Bull Terriers are intelligent dogs, but they’re also freethinkers who can at times be a little stubborn. This has earned them a bit of a reputation for liking to do things their own way, and because of this, they need firm, patient, and consistent training.

Yes, the Staffordshire Bull Terrier makes for an amazing family pet. They are patient and tolerant dogs that love being around people and are wonderful with kids of all ages.

Staffordshire Bull Terriers like nothing more than spending time hanging out with their family, and that means they’ll be by your side all day, whether you’re watching TV on the couch, out for a walk or a jog, or running errands in the car.

The breed is suitable for apartment living provided that they get out each day for some exercise. However, they will generally be better off in a house that has access to a large secure yard in which they can run around and play.

Staffordshire Bull Terriers are quite protective of family members. However, they are not overly concerned about property and will be more likely to make friends with somebody breaking into your house than stop them from making off with your new big-screen television.

Unfortunately, there is no simple answer to this question when it comes to Staffies.

If properly socialized and raised with other animals, many Staffordshire Bull Terriers will be okay living with other pets in the house. However, there are a good number of Staffies that regardless of the effort you make to socialize them, will just never be good with other animals.

As such, if you are looking to get one of these dogs, you should be prepared that you may need to live in a single animal home.

Things to Know When Owning a Staffordshire Bull Terrier

According to the American Kennel Club, Staffordshire Bull Terriers do best when they are fed a high-quality dog food that is appropriate to their age. This can either be in the form of a commercially manufactured dog food or in a veterinarian-supervised home-prepared meal plan.

However, as the breed tends to put on weight easily, careful management of their feeding is required to keep them fit and healthy.

Staffordshire Bull Terriers should never be free-fed, as they will simply keep eating until all their food is gone, so we recommend that you feed them twice a day with measured quantities of your chosen dog food. Half of their daily food intake should be given to them in the morning and the other half provided to them at night.

Staffies are, by nature, an energetic breed, and they should get at least 45-60 minutes of solid exercise every day. Usually, a good long walk in the morning or afternoon is all that is required to keep them fit. Having a large secure yard where they can run about and play will also help.

They are also quite prone to becoming lazy couch potatoes, so while they won’t complain if you don’t give them their required exercise each day, you will be doing them a disservice in the long run, as lack of exercise will ultimately affect their health and may negatively impact on their lifespan.

When planning their exercise, you need to keep in mind that Staffies aren’t big fans of the heat. So, if you live in a hot climate, it is important to keep them inside during the hottest parts of the day and take them out when early in the morning or after the sun goes down.

Because of their independent nature, training a Staffordshire Bull Terrier can be a little tricky. However, the key to success lies in remembering that they are intelligent dogs that like doing mentally stimulating things, and they love to please.

When training a Staffordshire Bull Terrier, you should try to keep the training sessions short and interesting, and you should also incorporate plenty of playtime and treats. These dogs will quickly work out that doing what you ask of them will both make you happy and result in them getting attention or a tasty treat, and from that point, as long as you can hold their attention, you should have no troubles.

Staffies have a short, smooth coat that is easy to maintain. They don’t shed much throughout the year, and as such, they’ll get by with just a quick brush once a week and bath when they need it.

They will need their nails clipped from time to time and should also have their teeth brushed weekly with canine toothpaste to prevent tartar buildup and bad breath from bacteria. As Staffordshire Bull Terriers can be prone to ear infections, it is also important that you check their ears regularly to ensure that they are clean and free of any redness and inflammation.

It is generally a good idea to get your dog used the grooming process while they are young. Even dogs that are as patient as Staffies can become annoyed with people brushing them, playing with their toes, or generally checking them over. By doing this regularly, your pet will come to accept the process as normal, and when they are older and stronger, you will find both grooming and veterinary checks are considerably easier if your dog is happy to let you check them over.

Staffordshire Bull Terriers are generally quite healthy dogs, and provided that they’re well looked after, they should go through life without too many problems.

As with most breeds, Staffies are predisposed to genetic health complications. However, through responsible breeding practices, health screening, and DNA testing, these can now be largely avoided.

Of course, if you have any concerns about the health of your dog or the conditions they may suffer, the best person to speak to is your local vet. Health conditions that can affect Staffordshire Bull Terriers include:

When it comes to choosing a Staffordshire Bull Terrier puppy, many people are not overly concerned about whether they get a male or female dog, choosing instead to base their choice on the personality of the individual dogs in the litter rather than their gender.

This is generally not a bad idea, as while there can be behavioral differences between male and female dogs, these can largely, if not completely, be eliminated by spaying or neutering your dog before they become sexually mature.

Staffordshire Bull Terriers have a bad and largely undeserved reputation as aggressive and dangerous dogs, when in fact, the opposite is the case. These dogs adore people, love spending time with their family, are affectionate, completely trustworthy, and great with children, and look tougher than they really are.

They make great family pets or companion animals, are suitable for apartment and city living, and are relatively easy dogs to look after.