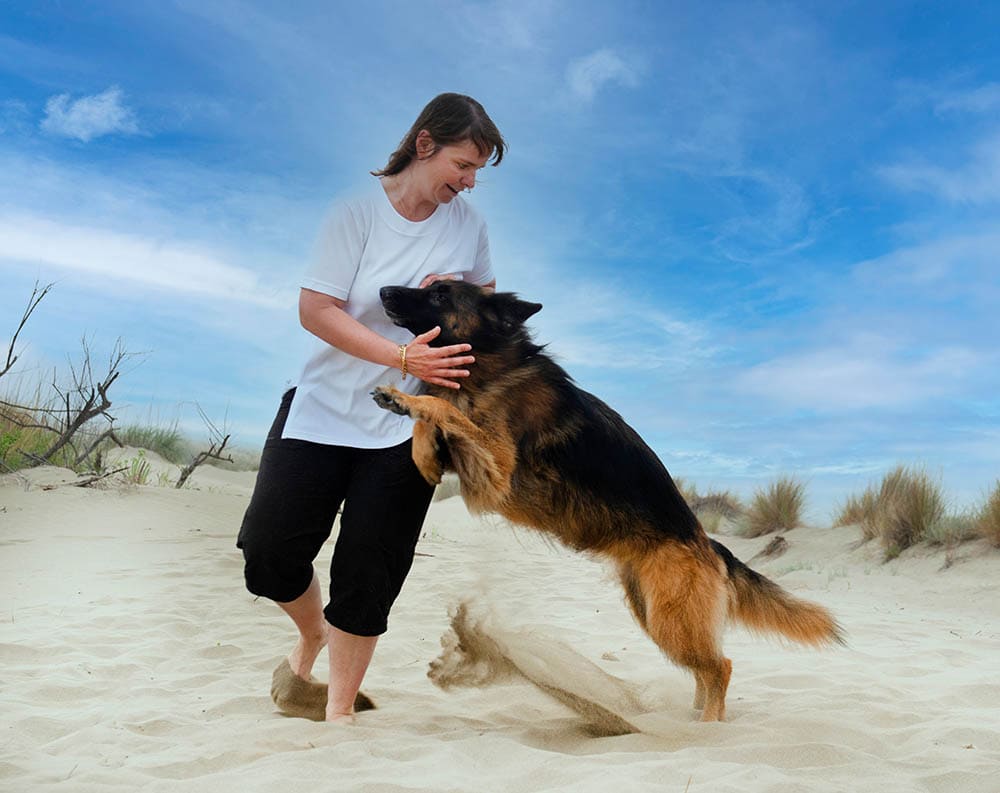 Chances are they have. The good news is you can train your German Shepherd to stop jumping on you and others with a few different methods. To begin, though, you need to understand why your dog is jumping in the first place.

Why Do German Shepherds Jump on People?

You may have heard people say that your dog is jumping on you as a sign of dominance or as an attempt to be the one in charge. The plain and simple truth is that in most cases, your pet is just trying to say hello when you walk through the door. In other instances—ones that don’t involve someone walking into the home—your dog is seeking attention or is just excited and doesn’t know how to express that in a more suitable manner. In all cases, though, jumping is a normal and natural behavior for dogs.

However, it isn’t behavior to be encouraged. While puppies jumping on you may be cute, the larger the dog gets (and German Shepherds are on the bigger side!), the more dangerous and disruptive this behavior can be. Not only does jumping on you result in dirty clothing or dropping items you were holding at the time, but when your German Shepherd jumps on someone, it could wind up accidentally hurting them. Children and older people can easily be knocked over by a large dog, plus anyone can end up with bruises or scratches.

Is It Our Fault German Shepherd Jumping Is So Common?

Unfortunately, in most instances, jumping is a behavior that we have encouraged, sometimes without realizing it. German Shepherds, like most dogs, are opportunistic. If something gets them what they’re angling for, they’ll do it repeatedly. So, if you have been giving your pup attention or food or other positive reinforcement when they jump on you, you’ll need to course-correct. (Believe it or not, even if you’ve been saying, “No!” or “Get down!”, it counts as attention to them.) Luckily, you can do this with a bit of training and management. Use one of these step-by-step methods to teach your German Shepherd to stop jumping on you and others.

How to Stop a Large Dog From Jumping on You

There are a few different ways you can train your German Shepherd out of jumping, so pick the one that’s best for you and your pup.

This is a general method to show your dog that jumping is unwanted and to redirect them to a new behavior.

Step One: Ignore bad behavior. When your German Shepherd jumps on you, ignore it entirely by turning your back to it. Don’t even say “No!” or “Get down!” — negative attention is still attention, and you don’t want to give them any of that. The trick here is that everyone must abide by this rule of turning your back, so be sure everyone entering or living in your home is aware of it.

Step Two: After you’ve turned away and once your pup has stopped jumping, you can reward them with a few pets or a treat. Speak to them in a calm voice to avoid getting them excited again.

Step Three: Once you’ve gone through the previous steps a few times and your dog has started to realize that calmer behavior is required, teach them what to do instead of jumping by giving them a command for a conflicting behavior. Most people tend to go with the “Sit!” command because your dog can’t sit and jump simultaneously but use whatever command you desire. After turning your back on your dog, tell them to “Sit!”. When they do, give them a reward.

Again, everyone should be doing this when you are in training mode, so your pet learns that not jumping applies to all. Doing this will require time and patience, but eventually, your German Shepherd will realize that sitting gets them what they’re looking for instead of jumping.

Step Four: Manage your dog’s behavior. There will be instances when your dog may jump on someone who doesn’t know you’re training them—someone who will go ahead and pet them or give them attention. In these cases, you can manage your dog’s behavior by removing them from the situation until they’re calmer, or, if you know you’ll be meeting others ahead of time (for example, on a walk), you can use their leash to walk them away.

2. Paws on the Floor

This method is for training your dog to keep four paws on the floor.

Step One: Get a friend or family member to help you.

Step Two: Keeping your dog on its leash, have the other person approach you. Before they reach you, toss a few treats on the floor in front of your dog.

Step Three: While your German Shepherd is busy with the treats, have the second person greet them with a “hello” and a few pets.

Step Four: Have the second person back off from the dog before it has finished the treats.

Step Five: Repeat Step Four several times. After a few rounds, have the second person greet your dog for a longer amount of time and continue repeating until your pet is keeping its feet on the floor.

Step Six: Once your pup is keeping all its paws on the ground, have the second person come and say hello before placing a treat down. Eventually, your dog will realize that the greeting is the reward and won’t require treats at all.

3. The “Sit” Command (How to Train a German Shepherd to Sit)

This method is another way to train your dog to sit instead of jumping.

Step One: Put your German Shepherd on a leash, then tie the leash to something sturdy, like a doorknob.

Step Three: Repeat until your dog gets the hang of things.

Step Four: Up the ante after your dog understands they need to sit by making your greetings more exciting. Not everyone will calmly greet a dog, so your pet needs to know that “sit, not jump” applies to calm greetings as well as excited ones.

Step Five: After your dog has perfected the art of the sit greeting, grab another person and try this with them. By doing this, your dog will come to understand that sitting instead of jumping applies to all people as well.

Training your German Shepherd will take patience and time, but it can be done. The best thing to do is to redirect their jumping behavior to a different one such as “Sit!” or simply keeping all paws on the ground. Keeping them from jumping during training will also be required. It will take dedication, but you can do this by directing them away from your front door when someone visits, throwing toys or treats to them so they are occupied before a person enters your home, or keeping them on a leash. German Shepherds are very smart dogs, though, so they should soon learn not to jump on you or others.

Can Dogs Eat Berries? What You Need To Know!