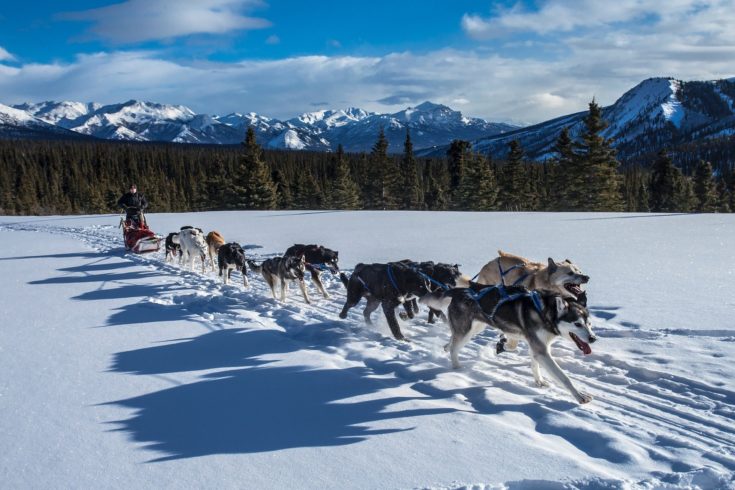 If you’ve ever had your pet pull you across the neighborhood on what was supposed to be a “relaxing” walk, then you already know how strong dogs can be. But have you ever wondered which breeds are the strongest in the world?

It’s an interesting question — and one that’s surprisingly difficult to answer. After all, how do you define “strength?” Sheer, raw power? Most force on a pound-for-pound basis? Do we factor in the emotional strength necessary to deal with you dressing it up in sweaters and pajamas and then sharing the pictures on Instagram?

We took all of the above factors into account (well, maybe not emotional strength) to come up with our list of the top 10 strongest breeds in the world. Did your pup make the list?

This one shouldn’t come as a huge surprise, because English Mastiffs are, well, huge. Males can easily weigh up to 250 pounds (and the largest one ever was 343 pounds!), so it’s completely reasonable to think that they can pack a considerable amount of strength inside their massive bodies.

Just how strong are they? Their ancestors were used to fight lions, tigers, and bears in Roman arenas. That’s some heavy-duty company right there.

Fortunately, most aggression has been bred out of them at this point, and they’re much more likely to be terrified of a housecat than to take on a tiger. They make great family pets, yet they’re also effective guard dogs based on their size alone.

Of course, it should go without saying that you need to leash train them early on because once they’re full-grown, you’re going to end up going where they decide to go.

Unlike Mastiffs, Rottweilers have no problem reminding you of their physical superiority when they feel the situation warrants it. That’s a big reason why they’re often used as guard and police dogs.

They’re about half as big as Mastiffs — which doesn’t sound impressive until you remember you’re talking about a dog that can potentially weigh 130 pounds. Like those larger dogs, Rottweilers also have an ancient lineage, as their forebears were used by Roman soldiers to guard cattle on long marches.

Rotties can be incredibly sweet, loyal companions, but they need plenty of training and socialization because they are not pleasant to be around when they lose their temper.

German Shepherds might be the pound-for-pound strength kings. They tend to top out at around 100 pounds, which is fairly reasonable compared to some of the giants on this list.

Still, they’re incredibly muscular and athletic, and they can be fearless when the situation depends on it. That’s why you often see them chasing after fleeing suspects when even their police handlers are afraid to get too close — and it’s why you often see those same suspects immediately surrendering if it means that the cops will call off their dog.

Like Rottweilers, this breed needs plenty of training and socialization, but if you raise them right, you’ll have yourself a fantastic addition to the family.

Also known as the Anatolian Shepherd, the 140-pound Kangal is the strongest dog in the world in one very important area: bite force. Their chomp has been measured at a whopping 743 PSI, which is more than enough to snap through bone.

Fortunately, these are very sweet-natured dogs, just like their Mastiff cousins. They were bred to watch over herds of sheep in their Turkish homeland, where they’d have to fend off wolves, lions, cheetahs, and more — yet when they’re off the clock, they’re very loving and protective towards their human masters.

Still, you’d likely have second thoughts about pilfering any sheep if you saw one of these lurking around. Or if you do plan on stealing their livestock, you’d better bring something bigger than a lion, so…um….good luck.

Have you ever heard someone say that a powerlifter is the strongest person in the world, and then someone else says that the actual strongest person is some regular-looking 150-pound guy who can do 1,000 pull-ups in a row?

Huskies are like that average-looking guy. They’re not very big, weighing in at a mere 60 pounds, but they can outwork just about any other dog on the planet. Bred for one purpose — to pull sleds — they can go for miles through thick snow without getting tired.

They make very sweet pets, but all that sled-pulling energy needs to be focused somewhere, so don’t expect to have a couch potato on your hands (then again, think about how much gas money you could save by sledding to work…).

While we’re comparing dogs to humans, have you ever known a person who was naturally bigger and stronger than everyone else, but couldn’t be bothered to get off the couch to prove it? If so, you’ve met a human Great Dane.

These massive mutts can weigh nearly 200 pounds, and if you’ve ever had one as a pet, then you know they can destroy your home without even meaning to. They were originally bred for hunting bears and boars but eventually discovered that hunting for Cheetos on the couch was much more civilized.

Known as gentle giants, these are extremely loving, friendly dogs. Owning one can put your life in regular danger, however, as they’re under the unfortunate misconception that they’re lapdogs.

At 175 pounds, Newfoundlands are large, imposing creatures, but these pups were created to take down relatively small game: fish.

They’re incredibly powerful swimmers, thanks in part to their webbed paws, and they’re strong enough to lug a human out of raging waters. Today, they’re often used in search-and-rescue missions, and tales of their heroics are both common and astonishing.

Newfies are incredibly sweet and easy to train, so they’re great to have around children. After all, “Nana” from Peter Pan was a Newfoundland, and you never saw Captain Hook mess with her.

St. Bernards were bred by monks to conduct rescues in the Alps, and they took to this job admirably despite not getting any specific training from the monks; instead, puppies learned by watching older dogs.

They’re no longer used for Alpine rescues, but their powerful noses and eagerness to please ensure they stay in high demand for search-and-rescue missions. When not working, they can often be found competing in (and winning) strength competitions.

Like many of the other huge dogs on our list of the strongest dog breeds, St. Bernards make fantastic pets, but they can also destroy your house quite by accident (not to mention drowning you in drool).

Hmm…another dog originally bred to fight lions. It seems like there’s some correlation between taking on giant jungle cats and being way too formidable for your average dog walker.

Despite being a relatively sensible 90 or so pounds, these dogs are tough as nails. They’re incredibly lean and muscular and make fantastic guard dogs, as they’re incredibly protective of their home and humans.

Even so, they’re generally even-keeled, and while they’re not overly fond of strangers, they aren’t likely to attack them, either. Unless of course, the stranger happens to be a lion in disguise.

If you’ve ever wanted a dog that can put its elbows on your shoulders and look down into your eyes, this is the pooch for you. The tallest of all dog breeds, these mutts can measure over six feet from nose to tail.

They were originally created to hunt wolves, but they also dabbled in taking on bears and lions as well. However, modern Wolfhounds are remarkably poor guard dogs, as they’re just too friendly and welcoming.

This makes them great with children, though, as well as loving pets. Best of all, they’re fantastic for getting items off of hard-to-reach shelves.

While the dogs on this list are powerful enough to perform just about any job asked of them, most modern pets have no need for all that muscle.

Still, if you take the time to train them when they’re puppies, every single breed on this list can make a wonderful companion for you and your family. And while you may not need all that strength on a day-to-day basis, who knows when it might come in handy?

At least you know you’ll never get pushed around by any lions ever again.

Can Dogs Eat Zucchini? What You Need to Know!

Can Dogs Eat Crackers? What You Need to Know!