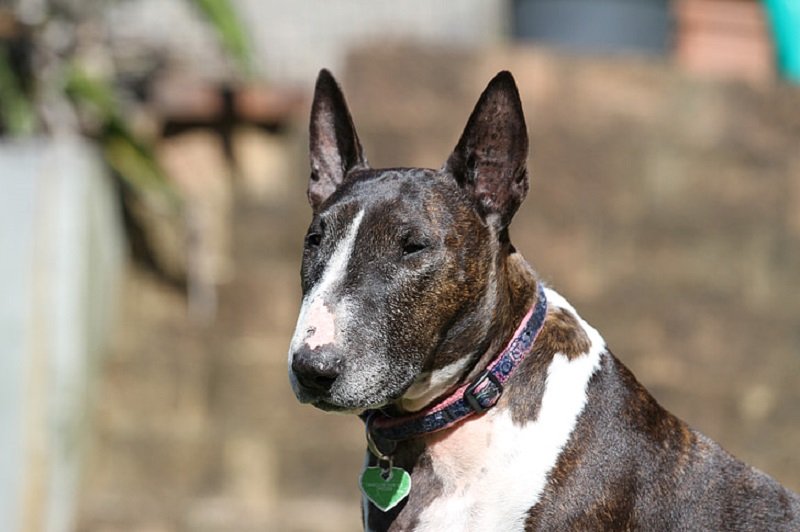 The Bull Terrier is a muscular dog that was well-suited to its unfortunate historical role. There is a reason for his name. Before you criticize the breed, consider how you’d react to being part of the “sport” of bull-baiting. This pup is fearless because he had to since it was in his best interest to survive. Fortunately, enthusiasts saw the potential in this surprisingly gentle pooch.

Contrary to popular belief, the Bull Terrier isn’t on the top of the list of dogs most likely to bite. Toy breeds, Collies, and Spaniels hold that place. It’s all in the training. It’s a regrettable circumstance that these affectionate pups end up with owners who perpetuate the stereotype. The fact that this pooch is strong, independent, and energetic works against him in this regard.

The Bull Terrier was a capable dog in this now illegal role in the ring. He had the temperament and brawn to back up his bark. History has retold this story time and again, although the plot has changed. This pup is an anomaly. He isn’t what the mainstream media has portrayed him to be. That makes this breed more intriguing and worth a second look for anyone wanting an affectionate, medium-sized pet.

Bull Terrier Puppies – Before You Buy…

The Bull Terrier is a strong dog. Temperament aside, the prospective owner must be able to handle a pooch that will challenge him. He will tug at his lead. He may forget his own strength. He may prove to be a more formidable opponent during a game of tug of war. These are not failings by any stretch of the imagination. It just means you must account for it.

There are some health concerns with the Bull Terrier. Health screening can help you avoid some of them. Others involving bone development take several tests to determine whether there is a problem. It’s essential, therefore, to know what you can find at the deep end of the pool. Other issues require monitoring, like the skin conditions that sometimes plague this breed.

That’s why we strongly urge you to buy only from reputable breeders who take the necessary precautions. Sure, that will increase the upfront price you’ll have to pay for a Bull Terrier puppy. You must weigh that fact against the emotional cost of a pet that has a health issue.

The market is a bit divided on the Bull Terrier because of his reputation. That is good for the prospective owner since it will drive prices lower. You can expect to pay at least $1,200 for a pup and likely higher, especially if he comes from a good bloodline. That’s not unusual, but a point worth noting. It can also play a role if you are unsure about whether to breed your puppy.

1. The Bull Terrier Segued into His Other Roles Easily.

Breeders selected traits to make the Bull Terrier the fighter that persists to this day. When the law changed things that made bull-baiting illegal, he gravitated well into his roles as a hunter of varmints like rodents and as a companion. He succeeds in the latter admirably.

2. The Bull Terrier Is Famous as a Mascot.

Cute dogs like the Bull Terrier often find their way onto stage and screen. He is no exception. Enter Spuds MacKenzie onto the screen, the official mascot of the iconic American brew, Bud Light.

3. A Special Bull Terrier Has an Alaskan Connection.

Patsy Ann wasn’t just an ordinary Bull Terrier. She was the official greeter of Juneau, Alaska, in the 1930s. Deafness didn’t get in the way of her charm. She knew when visitors were approaching. There is even a statue at the wharf that was her home turf.

Temperament & Intelligence of the Bull Terrier

The Bull Terrier has a couple of things going against him when the discussion turns to temperament. The pup has an unfortunate history that has encouraged aggressive, or shall we say defensive behavior. Then, there is his reputation. The stats tell the story. German Shepherds and mixed breeds have the most incidents in their records. While Pit Bulls come in third, the essential disclaimer is the word types.

Unlike many breeds, people often link the terms Pit Bull and Bull Terrier together. The former describes a type of dog, whereas the latter is the actual subtype or breed. Many see them as interchangeable, which is unfortunate. It fans the flames of the situation and makes it hard for the Bull Terrier to stand on his own ground and reputation.

Bull Terriers are surprisingly friendly with just about anyone they meet. Interestingly, that includes strangers. These pups love people. Improper rearing changes this instinct to get along with their family. These dogs are also kid-friendly. We suggest teaching your children to respect his space because of his strength. This canine makes an excellent family pet.

The Bull Terrier is dog-friendly if he has been socialized at an early age. Again, he sometimes is a victim of his strength. He may overpower smaller pets. However, this pup has a strong prey drive that may cause him to take chase if a cat runs away from him. Instinct will rule the day. He also has a high wanderlust potential that may cause him to see it through to the end.

Things to Know When Owning a Bull Terrier:

The Bull Terrier is a lot of energy in a medium-sized package. Prospective owners must understand what this dog needs to thrive. There are commitments you must make to training, upbringing, and socialization to ensure a good dog-owner relationship. We’ve outlined the ones that are essential for you to know to make an informed decision.

A medium-sized dog like the Bull Terrier needs a diet to match his energy output and metabolism. That’s one of the best ways to ensure that he meets his nutritional requirements. Although he is energetic enough, you must monitor his weight to avoid obesity. In the United States, these canines are more likely to be on either end of the normal weight spectrum.

As a puppy, your Bull Terrier needs to eat more often to maintain his blood sugar levels. Although necessary, it’s not as critical as it is for a toy breed like a Chihuahua. However, we recommend keeping him on a regular diet. It’s best to teach him to eat when you feed him, instead of leaving kibble out for him to free-feed.

The Bull Terrier is a spirited dog with lots of energy to spare. That’s one reason that he excels in competitive sports like agility. Even the AKC breed standard cites this as a vital trait for this pooch. Unfortunately, this pup has an aggressive history of fighting and work as a guard dog. He, therefore, has lots of fuel in the tank. Daily walks or exercise sessions are imperative to keep him happy.

There are two contrasting traits that you have to deal with when training a Bull Terrier. The pup is smart and willing to learn. He wants to please you. On the other hand, he has an independent nature due to his history. Selective breeding brought this trait out in this dog. After all, it was essential for his job. That poses some challenges for the prospective pet owner.

The Bull Terrier is smart enough to learn new tricks and commands. However, he has a stubborn streak that can make training a challenge for new pet owners. The keys are consistency and trust-building. A working dog likes a routine, which benefits you as much as him. Trust from positive reinforcement and gentle reprimands avoid hurting the feelings of this sensitive pooch.

The Bull Terrier is a seasonal shedder. Therefore, your maintenance has a defined schedule with little work between seasons. Weekly brushings are essential to keep on top of any potential skin issues. It’s also an excellent time to bond with your pooch and get him used to being handled, especially with his feet and ears.

We’d suggest looking over his coat any time you brush him. This breed is susceptible to some skin conditions, which are easily treated if caught early.

The Bull Terrier is a relatively healthy breed. Health screenings will help with many of the most common issues. The Orthopedic Foundation for Animals (OFA) recommends testing for joint defects that are prevalent with many dogs of this size. Many require repeat testing after the dog has reached his adult size. We suggest sticking with breeders who have taken these measures to ensure you get a healthy pup.

Both sexes are similar in size and temperament. A male is only more aggressive if he is intact. Therefore, we strongly urge you to neuter or spay your pup to prevent issues down the road. These pets are less unpredictable and make better companions without the other problems that could get in the way of a better dog-owner relationship.

Sadly, this affectionate and charming dog has received a bad rap because of circumstances beyond his control. He isn’t a mean canine. He is a victim of his strength, which suited him for his now illegal role as a fighter. The fact is that the Bull Terrier is a loving pet that is easy to train and able to adapt to the routines of your household. With the right family, he is an excellent addition with lots of love to share.

10 Dog Breeds That Don’t Need a Lot of Exercise