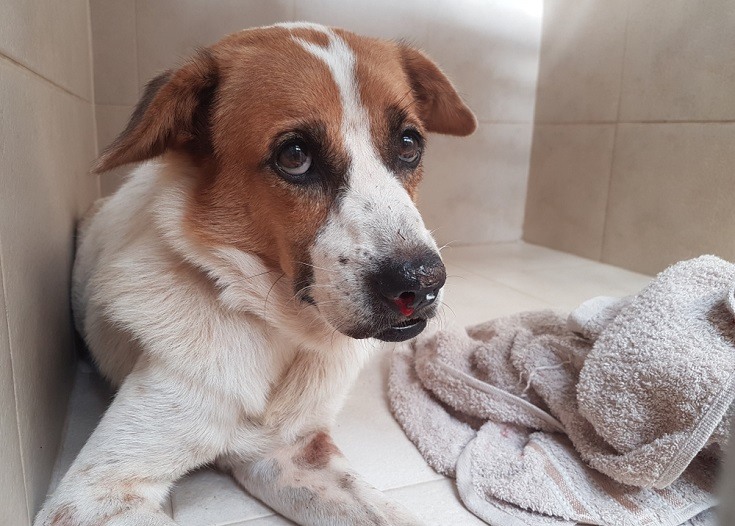 Nose bleeds in dogs are not that common, so it can be quite a frightening sight for dog owners, especially since no one likes to see their pup in pain.

When a dog suffers from a nosebleed, it is often called epistaxis. It refers to acute hemorrhage, which means bleeding from the nostril or any part of their nasal system. Many different things can cause it.

If your dog has a nose bleed, stay calm and contact your veterinarian. Don’t administer any medication without your vet’s approval.

According to veterinarians, nose bleeds for pups can result from a range of foreign objects, infections, trauma, and more. There are two types of nose bleeds: unilateral and bilateral.

1. Unilateral (Dog Nose Bleed One Side)

Unilateral means that the nose bleeds from only one nostril. It can indicate a growth, either cancerous or benign, on one side that is putting pressure on the sensitive nasal tissues.

They also might have inhaled a foreign object through their nose while sniffing and exploring. This could be a piece of plant material, a pebble, or an insect.

A unilateral nose bleed can also be a sign of a tooth infection on that side of their mouth.

A bilateral nose bleed means that blood is coming from both of the nostrils. These typically mean that your pup has an issue with their blood clotting. They could have an upper respiratory or fungal infection or trauma to the region around their noses.

There are congenital disorders that can cause issues with blood clotting, such as Von Willebrand’s disease. It is an inherited gene, though. Doberman Pinschers are one of the more common breeds that can suffer from Von Willebrand’s.

Discovering potential issues like this is why it is so important to check the parents’ health records before adopting a pup.

What to Do If My Dog Has an Active Nose Bleed?

There are not many things that you should do if your dog starts to have a nose bleed. Simple first aid procedures are fine, but it will ultimately be best to have a vet check them. They can tell you what is causing the nose bleed, diagnose it, and prescribe corrective treatments. Here’s what to do until then:

When you go into the vet, they will need your pup’s complete medical history. If they have been taking any medication in the last several weeks, then be prepared to list it.

During the exam, the vet will conduct a physical, checking their eyes and gums and the nose. They will check for other signs of abnormal swelling or areas of pain and redness on the body. They might need to take swabs of saliva and blood samples to check for any bacteria or fungi that could possibly cause infections.

The following tests are possible if a diagnosis isn’t immediately apparent:

Treatments for Nose Bleeds in Dogs

Since the diagnosis for epistaxis is so varied, the treatments are even more so. It can be a small amount of trauma, such as your pup running headfirst into a wall, to life-threatening issues like a  cancerous tumor or liver failure. The treatments for these would be entirely different.

If the diagnosis is a foreign object, it needs to be removed. That procedure often involves sedation. If it is a dental infection that has caused it, then sedation and tooth removal is the treatment. In the case of a bilateral nosebleed caused by a fungal or bacterial infection, antifungal or antibiotic medications will be prescribed.

Other causes related to disease, cancer, or growths, hypertension, or blood pressure disorders can have a much longer treatment plan. It is often more extensive, but it can also have a positive prognosis in the end if caught on time.

Although it can be frightening, epistaxis can be caused by only minor bumps and scrapes. Remain calm, and do your best to reduce the pain and swelling for your dog. Keeping control of the situation, trying to stem the blood with ice and slight pressure, and seeking veterinary care are the best things to do for your adored companion in this scenario.

Swedish Vallhund vs Corgi: Which Breed is Right for You?

How to Potty Train a Husky (8 Quick & Easy Steps)