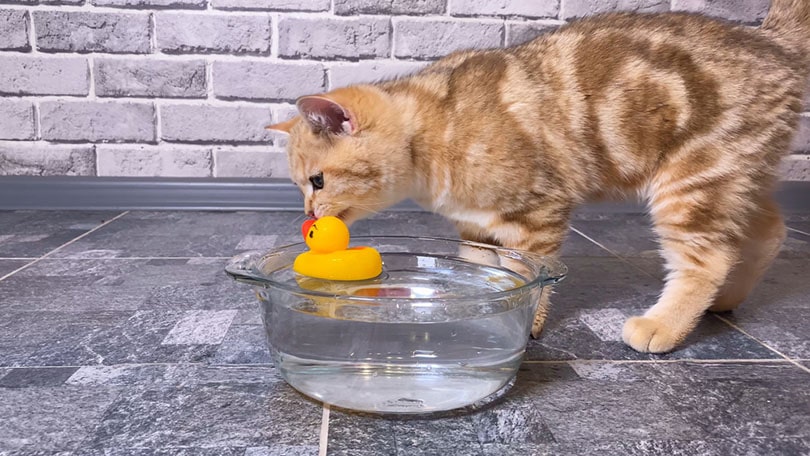 You walk to your cat’s water bowl only to find their toy floating around. You likely wondered why cats put their toys in the water bowl.

Even though this behavior is common among cats, it still baffles scientists and cat behaviorists. Nevertheless, they have come up with several theories that try to explain this weird behavior.

Here are some of the reasons why cats put their toys in the water bowl.

1. Your Pet is Hiding or Nesting Its Prey

You might not have guessed it, but if your cat continually puts its toys in the water bowl, it is because it perceives the toy as natural prey. But why would your cat think so?

Despite man’s efforts to domesticate cats, they still retain an instinct that drives them to hunt. Before domestication, these furry animals would hunt prey then bring it to their nest, also known as cache, to protect it from other predators who’d want to steal it.

Since this natural drive is still present in your kitty, it will push your pet to hunt for prey. However, since it does not have a nest to hide its game, which is the toy, it views the water bowl as a safe place. This is why you’ll find the toy floating in the water bowl.

2. Your Cat is Driven by Collecting and Gathering Instincts

Cats also have an ancient instinct to collect and gather objects. This behavior is well-illustrated by a mother who will move her kittens by biting the loose skin on their neck. Or, she will pick her wandering kittens and place them back to the nest.

The same applies when your cat drowns its toys in the water bowl. It is only acting on its collecting and gathering instinct.

3. It is Washing off the Prey’s Scent

Remember how cats would nest their prey to protect it from other predators before domestication? It turns out that they also dropped their target in water to disguise scents.

Doing so washed off the dead animal’s scent, saving the cat its meal and life from superior predators.

Likely, this instinct is still active among house cats and a reason for the drowned toys.

4. Your Furry Pet is Teaching You How to Hunt

This may come as a shocker, but your pet is likely teaching you the concept of hunting. Your cat is trying to entice you to start hunting and gathering prey the same way a mother would teach its kittens to hunt.

In the wild, a mother will bring prey, whether dead or alive, to the nest to teach the kittens to kill on their own. In this case, your pet is dropping the game in a safe environment (water bowl), so you can learn how to do it yourself.

Next time, pay attention to the hunting lesson!

5. It is a Token of Affection

Your cat appreciates your effort to feed it daily. This is why it will gift you a dead mouse. Yes, that dead mouse you found on the porch or in your bed was a token of appreciation.

But how does that apply to the pet toys in the water bowl? Well, in this case, your cat is leaving the toy, or ‘prey’ as a gift because they know you’ll find it.

6. Your Pet is Having Fun

Or it could be that your cat is just playful. Cats are fascinated with water, and they love to strike, pounce, or fish objects out of water.

Your cat could be enjoying the sensation of dropping and fishing its toys from the water bowl to satisfy its dormant wild nature. Or, it could be having a good time making splashes.

7. It is a Learned Pattern

What was your first reaction when you found a toy in your cat’s water bowl? Cats enjoy attention, and they learn behavior through patterns.

So, if you fussed around the water bowl or laughed as you collected the toys, this could have motivated your kitty to drown more toys.

8. Dropping the Toy was Convenient

It is also possible that your cat drops its toys in the water bowl because that is a practical and convenient move.

To better understand this, assume your cat was holding the toy in its mouth but had the urge to drink water. What would be the reasonable action? Dropping the toy in the water bowl!

9. Your Cat Is Bored

Cats get bored quickly despite their intelligent and active nature. When this happens, they will find ways to create their enrichment. At times this includes destructive behavior like drowning toys in the water bowl.

10. It Could Be a Health Issue

Although most theories do not point out veterinary health issues, it could be why your cat is putting its toys in the water.

When cats develop thyroid imbalance, feline diabetes, or kidney problems, they create an odd relationship with water. Some of the warning signs include messy drinking, excessive drinking, or splashing water around coupled with lethargy, decreased appetite, and confusion.

If you notice any of these warning signs, it is best to schedule a checkup with your pet veterinarian. You want to be sure that your cat is healthy.

Can You Stop Your Cat from Putting Toys in The Water Bowl?

If you are frustrated with your cat drowning its toys in the water bowl, you must be looking for ways to stop this behavior. Is it possible? Yes, with these four tricks.

1. Find More Enrichment for Your Cat

The best way to distract your cat from putting toys in water is by adding more toys and enrichment. In addition, increase your interactive playtime to keep your pet engaged.

But if you restrict access to the water bowl, make sure your cat stays hydrated.

If you discover that your cat intentionally puts its toys in the water bowl to capture your attention, ignore them.

Rather than clean up the mess as your cat watches, wait until they are distracted or asleep. This will send a message that you are disinterested in the behavior.

Lastly, cats rarely drink soiled water, but they will play or put objects in it. Therefore, change your pet’s water bowl frequently to stop your cat from dropping toys.

Now you know why cats put their toys in the water bowl. It could be due to an innate drive to nest their prey or getting rid of the scent. It could also be that your cat is having fun, or they are gifting you. 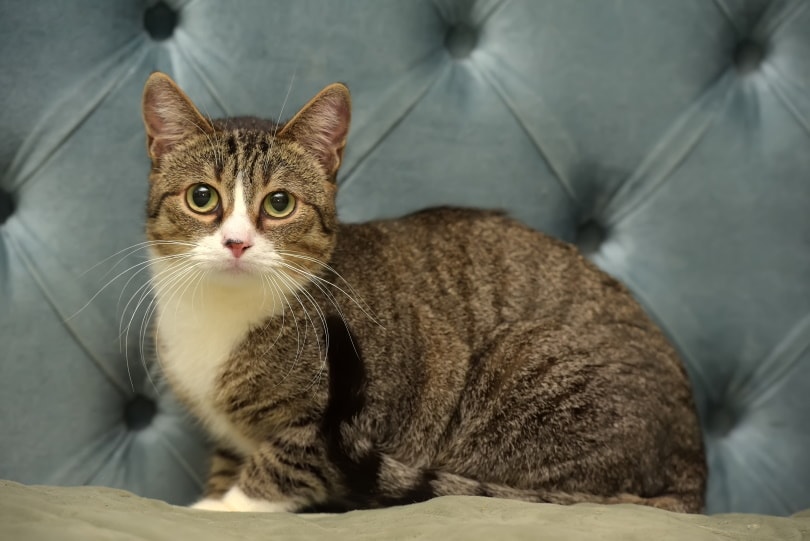 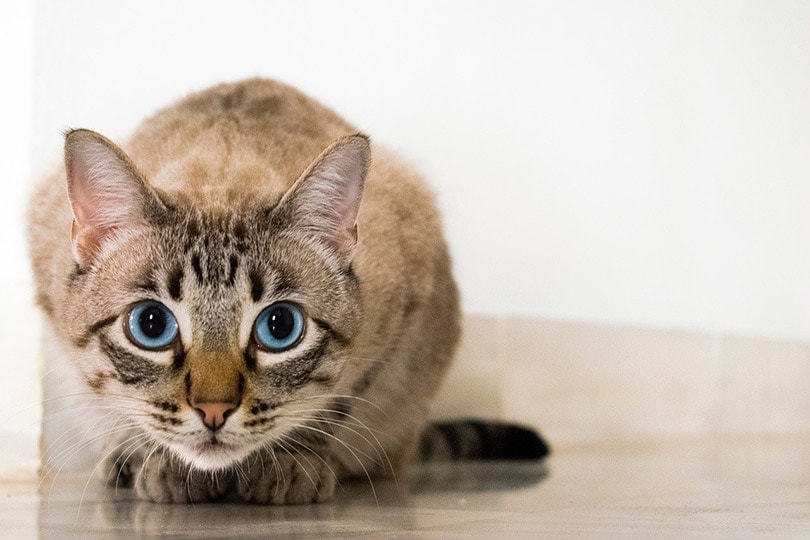 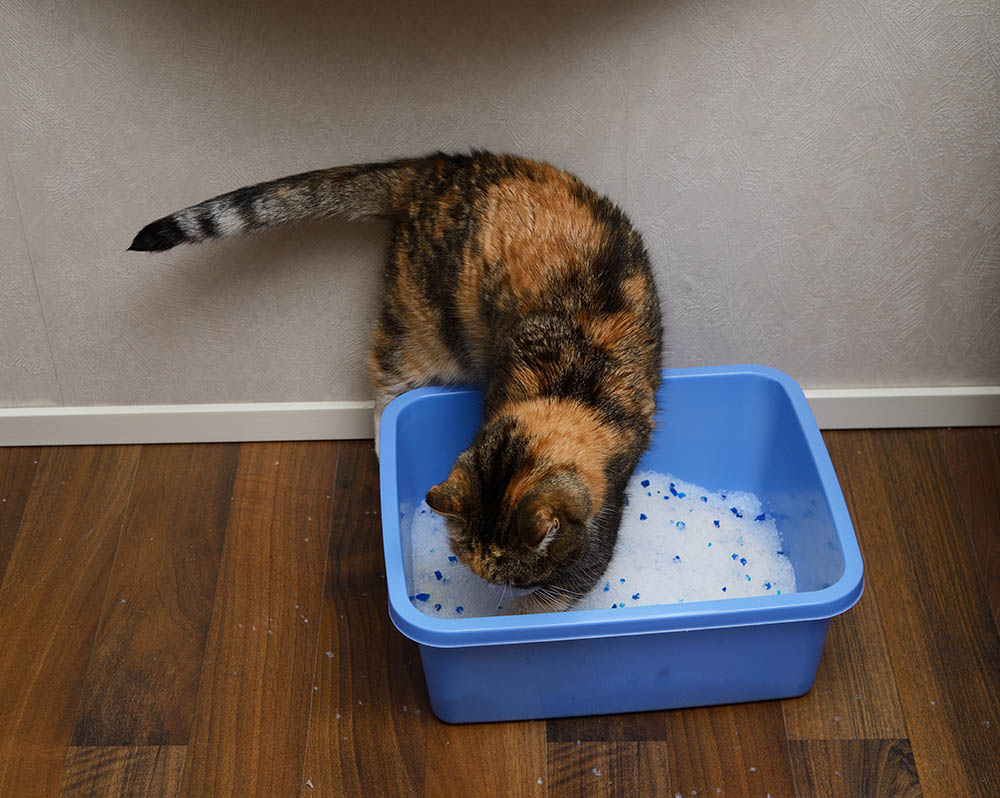 Why Do Cats Bury Their Poop? 3 Reasons for This Behavior