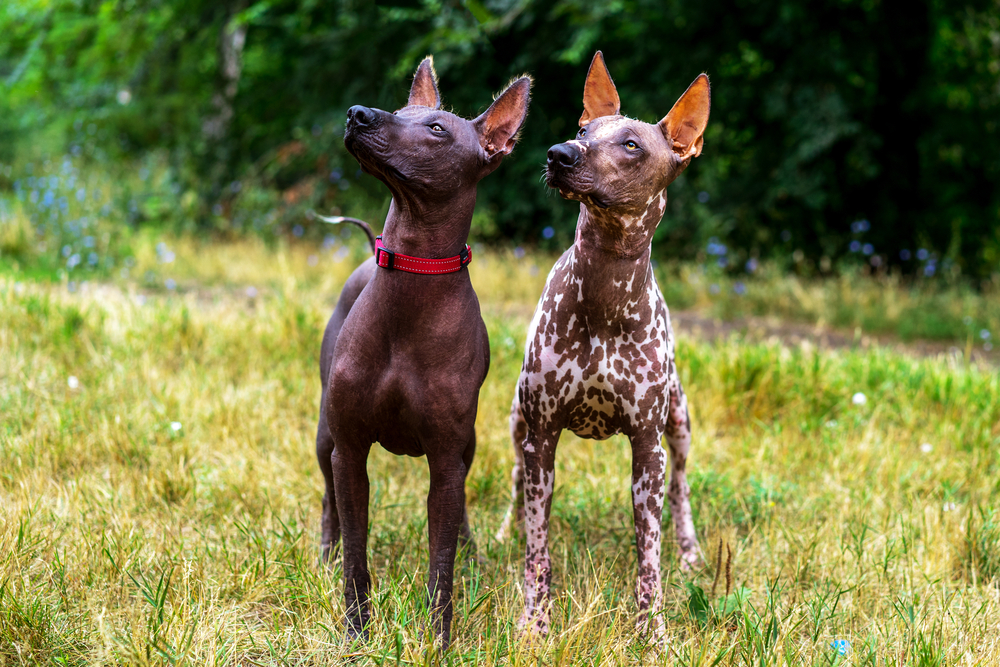 Since the name Xoloitzcuintle is such a difficult one to pronounce, most people simply these dogs Xolos. They’re an ancient breed that lived alongside the Aztecs hundreds of years ago. Just as unique as their history is their appearance.

The Xolo is a nearly hairless dog, with bald skin that can range in color from white to black and is usually a mixture of several hues. There’s a tuft of hair on the head that makes it look like they’re wearing a mohawk, but that’s it.

However, there are several varieties of Xolo. Most of them are hairless, though a few specimens do have a very short, rough coat. This breed also comes in three distinct sizes; toy, miniature, and standard.

These dogs are alert and watchful, always ready to defend their family who they love dearly. This breed is known as a velcro breed, which means they want to be stuck to your side all the time and never want to be left alone.

They are playful, affectionate, and loyal to a fault. You won’t see a Xolo being hyper; they generally have calm demeanors, making them rather easy-going.

Xoloitzcuintle Puppies – Before You Get One…

1. This breed has been around for three millenia.

Few breeds have a known history that stretches as far back as the Xolos. These dogs have been around for more than 3,000 years. They were in America long before Christopher Columbus ever landed on the shore. Unlike most modern breeds that are the result of mixing and crossbreeding over many generations, Xolos are considered to be a natural breed. Put simply, this means that Xolos were built by the process of natural selection.

2. They’re not vegetarians, but they love vegetables.

It’s well-known that Xolos love vegetables. In fact, they love them so much that the idea took root that Xolos are actually vegetarians. This isn’t true. Like all dogs, Xolos need to eat a considerable amount of protein to stay healthy. But they do seem to enjoy vegetables more than most other breeds.

3. Ancient Aztecs used them as medicine.

The long history of the Xolo includes a long period where they lived alongside the Aztecs. The name Xoloitzcuintle even comes from mixing the Aztec word for dog, itzcuintli, and the name of their fire god, Xolotl.

Why the fire god? These dogs are known for being very warm, which is why the Aztecs used them as a cure for asthma, rheumatism, toothaches, and more. They also believed that they guided the dead into the afterlife, which often meant sacrificing the dog. Interestingly, the Aztecs considered the Xolo to be good eating, so they were often used as a source of food.

Temperament & Intelligence of the Xoloitzcuintle 🧠

Xolos are some of the smartest dogs around. They bond very deeply with their family and don’t ever want to leave your side. These are velcro dogs through and through. But they’re not limited to closely bonding with one person. Every member of the family who takes a hand in raising, feeding, and caring for your Xolo will share that close bond.

This is a calm breed overall. They have a very easy-going demeanor, though they can be more aggressive with strangers. If a Xolo thinks its family is in danger, they won’t hesitate to act.

Xolos are great family dogs, as long as every member of the family takes an active role in raising the dog. Anyone who doesn’t, won’t share that close bond.

These dogs are generally great with kids, though young children can sometimes be a problem. Xolos don’t react well to having their ears and tails pulled or other similar actions, and they’re likely to react with aggression.

Because they’re a natural breed that’s still with strong primitive instincts, Xolos usually have a pretty strong prey drive. They won’t do well with cats or other animals. Some Xolos can do well with other dogs if they’re socialized early on. Still, it’s best not to count on socializing the prey drive out of a Xolo because it can be quite strong.

Things to Know When Owning a Xoloitzcuintle:

Since Xolos come in three different sizes, how much you feed them will depend on which type of Xolo you have. All three types of Xolos will do well on a high-quality dry dog food. For toy and miniature Xolos, you’ll want to get one that’s specifically meant for small breeds.

One of the great things about owning a Xolo is that they don’t need much exercise. 20 minutes a day of moderate physical activity should be plenty. This could just be one or two short walks or a good game of fetch.

Because they don’t need much exercise, these dogs are fine living in smaller spaces and a yard isn’t necessary. If you live in an apartment or a townhome and you’ve been struggling to find a dog that’s suitable for such a home, the Xolo is a great candidate.

Xolos are great dogs to train because they take to training so well. They’re incredibly intelligent, so it’s easy for them to understand what’s being asked of them. Just as importantly, they’re deeply bonded with their family and they have a strong desire to please their people. When you combine this with their high levels of intelligence, it makes them an easy breed to train.

These dogs excel at basic training as well as advanced obedience training. They learn very quickly, so don’t be surprised if you’re able to find success faster than expected.

One of the most unique features of Xolos is that they’re almost completely hairless. The most prominent hair they have is on their head, where the small tuft has the appearance of a mohawk. Beyond this, they may have a small bit of hair around the very end of the tail and the feet.

Since their skin is exposed, you’ll need to give it some extra care. Xolos need regular bathing and their feet need even more washing to keep their glands clear. You shouldn’t need to apply any lotions, though you will want to use sunblock when your dog is going to be exposed to direct sunlight. Just make sure to wipe it off once your dog comes back in.

Here’s something to keep in mind; even though the Xolo is hairless, they’re not hypoallergenic. That said, they are often good choices for people that are allergic to dogs. They’re less likely to trigger your allergies than other breeds, but they still could. If your allergies are sensitive to dogs, it would be best for you to spend some time around a Xolo before purchasing one so you can see how you react.

But not all Xolos are hairless. Some of them do have very short, dense, tough hair. But this coat doesn’t require any extra work, so caring for Xolos with a coat is the same as caring for a hairless one.

Overall, Xolos are a healthy and hardy breed. They have very few health concerns to look out for. Most of the health problems they’re likely to encounter are related to their hairless skin.

The Xoloitzcuintle might be the most unique breed of dog on the face of the earth. From their interesting hairless appearance to their incredible history that spans several millennia, Xolos are not like other dog breeds.

they’re still normal dogs in the most important ways. They display unending loyalty, giving love and affection to each member of their family who they bond closely with. These highly intelligent dogs are easy to train and only require minimal exercise, making them great for families and even good for first-time dog owners.

Xolos are pretty rare and you might have to search long and hard to find a reputable breeder, but if you’re able to add one of these wonderful canines to your family, you’ll have a best friend and partner that will have your back for life.