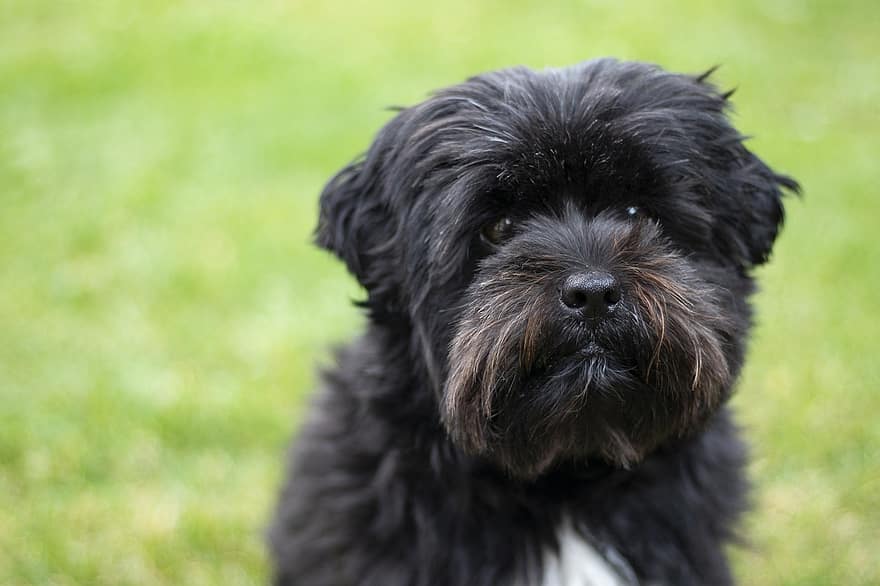 The adorably bearded cross of a German-born Affenpinscher and Chinese-born Pug, the Affenpug is a recent and welcome addition to the world of designer dogs. The offspring of two companion animal breeds known for their ridiculous antics and distinctive features, the Affenpug doubles down on the hilariously strange-looking appearances of both breeds.

Happy and affectionate, these dogs most strongly resemble the lovable Ewok of Star Wars fame. Headstrong and alert yet fun-loving and devoted, they’re a curious combination of temperaments and personalities that loves providing fun and entertainment for singles or families.

Whether you’re thinking of adopting an Affenpug or just here to read more about this distinctly different designer dog breed, you’re in luck — we’ll cover everything you need to know about what it’s like to live with an Affenpug and more. Read on!

Affenpug Puppies – Before You Get One

Even more than the cost of buying a puppy, you should always be prepared for the investments of your personal time, energy, and effort before committing to bringing one into your home.

Since the Affenpug is a relatively recent development as far as dog breeds go, it’s useful to look more closely at the personalities and characteristics of both of its parent breeds, the Affenpinscher and Pug. After that, we’ll discuss how these traits combine and express themselves differently in the unique case of their Affenpug offspring.

Literally translated from its original German, the Affenpinscher would more properly be known as the “Monkey Terrier” – so named both because of its rascally personality and distinctive tousled coat. Originally bred to chase rats, pint-sized terriers of this type have been known since the early 1600s in Germany.

Friendly towards dogs and other pets, Affenpinschers are exceptionally adventurous and active little companions with a stubborn streak that can be difficult to break. They are often territorial with food and toys, making them less suitable for homes with smaller children.

With an even longer history than the four centuries of Affenpinscher lineage, the Pug was popular in the imperial courts of the Chinese Song Dynasty, circa the year 1000. Highly regarded in their placement as royal companion dogs, their intensely affectionate and devoted natures won them the favor of European royalty when they were imported in the 1600s.

Today, the Pug is well known across the world for its incredible friendliness and inimitable appearance. Years of interbreeding have left the Pug with a serious list of health conditions, however, most problematic being their short snouts and lack of a skeletal brow ridge.

When combined in the Affenpug, many of the undesirable traits of both breeds are minimized – with the Affenpinschers stubbornness receding somewhat, and the Pug’s health issues being reduced by the introduction of new genetic material.

1. The Affenpug Comes From Award-Winning Stock

Interestingly, both the Pug and the Affenpinscher have been named Best in Show at the Westminster Kennel Club Dog Show, the most prestigious dog show in North America. 1981 saw a Pug named Dhandys Favorite Woodchuck win Best in Show, while an Affenpinscher named GCH Banana Joe V Tani Kazari won Best in Show in 2013. Few designer dog breeds can claim to descend from two BIS-winning breeds.

Something about the helplessly devoted Pug has struck a chord with their human owners and caretakers for over 1000 years. Since their time in the imperial courts of Song Dynasty China, Pugs have been looked after fondly by emperors, even enjoying long stints as monastery dogs with Tibetan monks. In more modern times, the Pug has been famous for its roles in Hollywood films like “Men in Black” and “The Adventures of Milo and Otis”.

3. Affenpugs Can Be Very Territorial With Their Food and Toys

Inherited primarily from their Affenpinscher side, Affenpugs may display aggressive tendencies while eating or playing. They’ll rarely lash out at other dogs, but smaller children can unknowingly provoke their ire while trying to play. This makes the Affenpug a much better match for families with older children or single owners.

Temperament & Intelligence of the Affenpug 🧠

Playful and eager to please, the Affenpug is a high-spirited little creature with a keen wit and intelligence that it often hides behind a dopey face. Well-known for their comedic behaviors and somewhat nervous dispositions, they’re an intensely sociable dog that still remains alert at all times. They bond quickly with their family and other dogs but can be possessed of a stubborn streak that makes them difficult to train at first.

Feisty but friendly, the Affenpug is best suited for more mature owners. Their tendency towards territorial behavior around food and toys, combined with their smaller stature, makes them less well suited for families with small children. Given their sometimes-nervous dispositions when left alone, the ideal home for an Affenpug would be with mature owners and a few other dog companions to keep them company when you leave.

Despite their rat-chasing heritage, Affenpugs are easily trained to get along with small animals. They rarely show aggression, except around their food bowl, and get along marvelously with just about any other dog breed. Highly sociable thanks to their Pug side, they make friends easily and can adjust quickly to new pets in the home.

Things to Know When Owning an Affenpug:

After seeing all these adorable pictures of Affenpugs and getting to know more about their origins, are you thinking it might be the right dog breed for you? If so, follow along as we closely examine their nutrition, exercise, and grooming requirements, in addition to discussing their inherited health conditions.

Small dogs like the Affenpug only require around one cup of high-quality dry dog food per day and should have their food intake closely monitored to prevent weight gain. On their pug side, these dogs are prone to weight gain and obesity. Choose a dog food that’s appropriate to your Affenpug’s stage of life, matching puppy, adult, or senior formulations to their current dietary needs.

Far from being an athletic dynamo, the Affenpug has low endurance and tires out quickly with even moderately intense activity. Around 30 minutes per day of moderate to vigorous activity is enough to help them stay healthy and happy, and you should be careful not to overdo it on activity lest they find themselves too exhausted to cuddle with you at night.

Affenpinschers are known for their occasional hardheadedness, owing in part to their original purpose as rat-chasing dogs. Though this is diminished by the Pug’s cross-breeding influence, it may still crop up in the Affenpug. If you’re inexperienced with dog training, it may be best to invest in early-life obedience and puppy training from a professional.

Most Affenpugs will inherit the wiry coat of their Affenpinscher side, rather than the prodigiously-shedding coat of a Pug. This means that they will need to be brushed and combed out several times per week, and frequently have the hair trimmed from around their eyes.

Nails should be trimmed monthly to keep your dog’s feet comfortable, and weekly ear washings will help keep your Affenpug in tip-top shape. Plan on brushing their teeth at least once a week to maintain appropriate dental hygiene.

Even with the beneficial health effects provided by cross-breeding, the Affenpug is likely to experience some congenital health difficulties in its lifetime. These can include:

As with most designer dogs, the sex of each puppy will have less of an effect on their overall temperament, behavior, and physical appearance than the relative dominance of one breed or another. If you’re looking for a specific sort of personality in an Affenpug, we recommend focusing on which of its parent breeds has more desirable characteristics and selecting a puppy based on that.

With their uniquely adorable appearances and hilariously playful attitudes, Affenpugs are an attractive option for anyone looking for a small companion animal. Thanks to the beneficial effects of cross-breeding, this designer dog is generally healthier than either of its purebred parents and will likely enjoy a healthy life for a decade or more. If you’re willing to put in the time and effort to care for an Affenpug, they’ll repay you in kind with unerring love and affection.