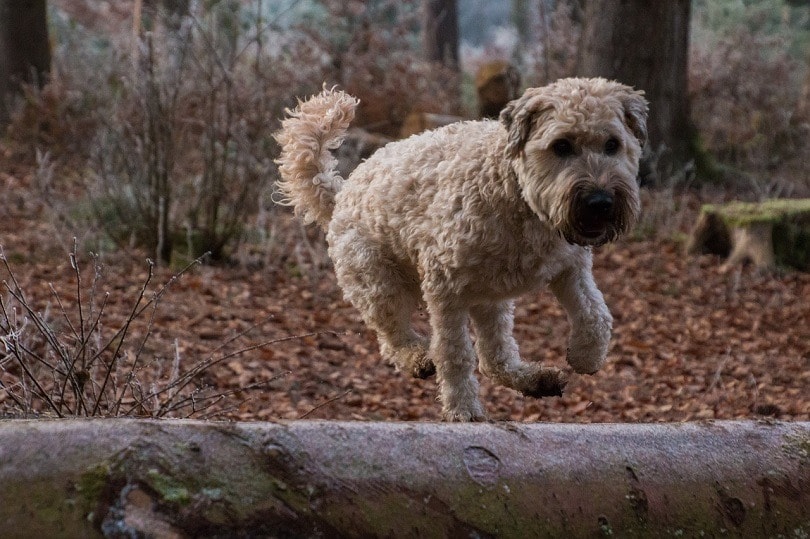 Since not a lot is known about these Australian Shepherd Wheaten Terrier mix designer dogs, we want to give you all of the information you need to decide whether this dog is right for you. Interested in knowing more? Read on to find out about the wonderful Aussie Wheaten!

Aussie Wheaten Puppies – Before You Get One…

If you love the look of Aussie Wheaten puppies, you will want to know everything that you can about them before you go and get one for your family. Below we are going to tell you some things about their temperaments, how much they cost and other things to help you make the right decision.

2. They have a lot of energy. This means that they’re a lot of fun but they also need a lot of exercise.

3. They are often very clownish. They’re often lots of fun and very cute if you make sure you’ve taught them manners.

Temperament & Intelligence of the Aussie Wheaten🧠

Aussie Wheatens are energetic, affectionate and joyful, and they love to play. They’re easygoing and friendly and generally will be fine with some other dogs. They are great with people and enjoy being around with children who are well-behaved.

They love going outside and are willing participants in family activities. If you don’t include them in games, be ready to have them try snatching your ball or frisbee and insert themselves in your game, whether you want them to or not.

They’re able to adapt to life in the city along with life in the country. Just make sure you give them the exercise they need. They’re going to love running around the park, backyard, or house for hours if they’re allowed.

They are much better with well-behaved and more mature children who understand boundaries and can get overwhelmed by young children who might poke, tug, and surprise them.

You should start socializing them early. They’re usually easygoing with new people and they don’t mind being around other dogs. However, you want to socialize your Aussie Wheaten so that these traits are developed.

They are, yes, but they will do better with older children rather than younger children.

Yes, they get along with other dogs and cats. It’s best if they are introduced when they are a puppy, so start socializing them early. This will make things a lot easier for everyone.

Things to Know When Owning an Aussie Wheaten

So, you have stayed with us this long, so you are interested in knowing more. If you are thinking of getting the cross between the Australian Shepherd & Soft Coated Wheaten Terrier, known as an Aussie Wheaten, there are some things that you should know about this mix.

As with any type of dog, the amount of food that you give them will depend on their age.

When you first bring your Aussie Wheaten puppy home, from 8 to 12 weeks old, you should be feeding them four times per day.

When he’s 3-6 months, you can take him down to three meals each day. After a year old, he should be fed twice per day.

The food you give your Aussie Wheaten should be high quality mixed with broth, water, or canned food. You also can give him cooked eggs, vegetables, cottage cheese and fruit.

It’s important to start training your Aussie Wheaten early. Their intelligence also makes it pretty easy to train them, but these dogs are often stubborn and nippy due to their hunting and herding nature.

Although Aussie Wheatens aren’t completely hypoallergenic, they produce fewer allergens from their hair because they’re part Terrier. These dogs can be very messy, and the coat is medium length and wavy, so it requires regular brushing using a brush with firm bristles. This will help with reducing matting and shedding.

It’s not necessary to have the Aussie Wheaten professionally groomed regularly, but it’s not a bad idea to trim the edges around their feed, under their tail, and around their ears to make maintenance simpler. The breed should be bathed monthly or on an as-needed basis, with special attention being paid to cleaning in the area of his ears and eyes.

Like any breed of dog, their teeth should be brushed each day and their nails should be clipped once each month to every six weeks. Because these dogs are known for enjoying being outside, it’s also important to check their coats for insects such as ticks or debris that may be caught in the coat.

Aussie Wheatens are often prone to a variety of health issues. Although there are some mentioned here, it doesn’t mean that your Aussie Wheaten will have these problems.

If you are looking for a dog to add to your family, an Aussie Wheaten is a wonderful choice. Aussie Wheatens are steady, happy and self-confident and make great watchdogs. However, they are also very friendly. They love children and will get along with other dogs and cats, particularly if he was introduced to them as a puppy.

However, when they are outside, they will chase any furry small animals that cross their path. So don’t be surprised if you see them suddenly take off across the yard.