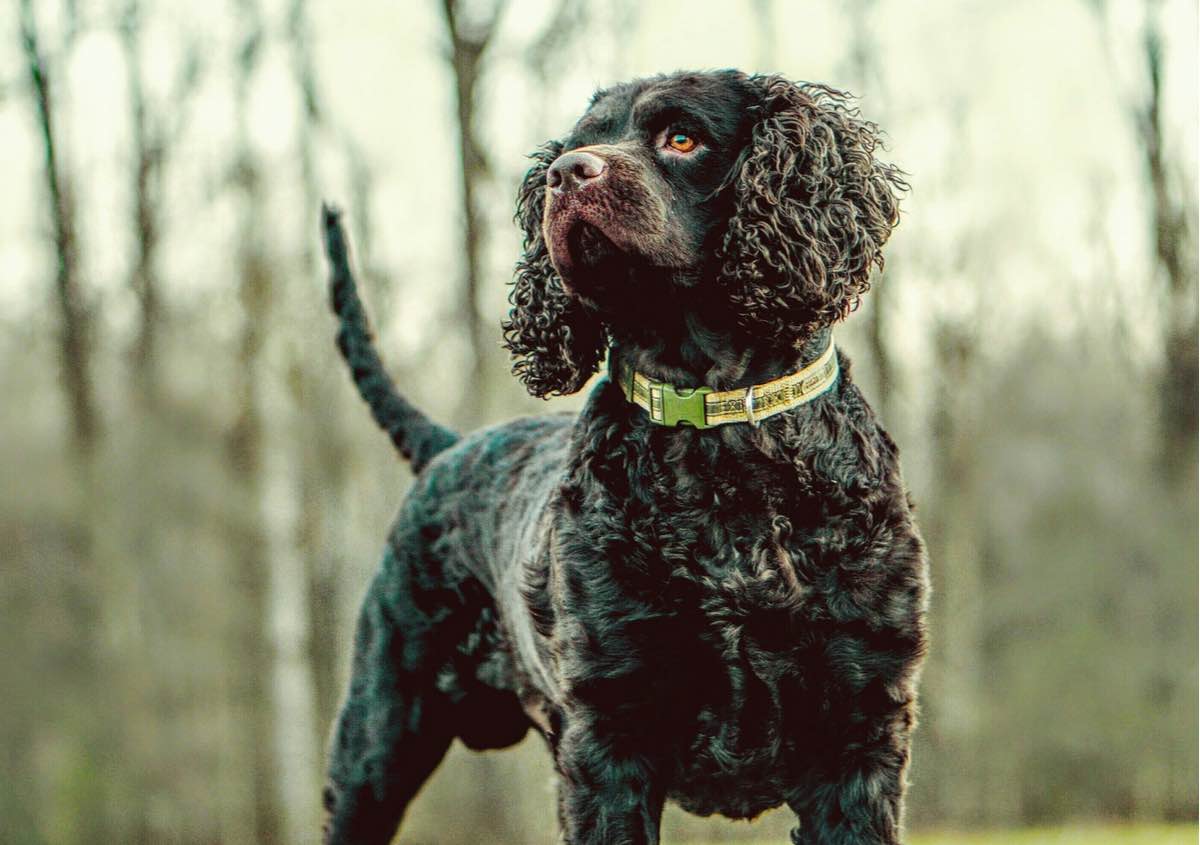 An easy-going breed with a thick double coat, the American Water Spaniel is built for hard work in some of the most frigid conditions imaginable. They’re waterdogs, bred to retrieve waterfowl from icy waters without worry. They’ve got thickly padded feet, webbed toes for faster swimming, and a dense coat that’s completely waterproof. They’re even small enough to get in and out of little boats without rocking them. In all, they’re the quintessential waterfowl retrieving gundogs.

But these dogs were built for work and they absolutely need to work to be happy. If you don’t give your dog a job and plenty of physical exercise then you’ll have a loud, destructive, bored dog on your hands. These dogs have tons of energy that needs a daily outlet. Each day, you’ll need to devote as much as two hours to exercising your American Water Spaniel, so they’re best-suited for hunters who will keep them employed and athletes who want an activity partner. If you’re a swimmer, this breed might be a perfect fit!

These dogs are ranked quite low on the AKC’s breed popularity list. Out of 196 breeds, the American Water Spaniel ranks 166 for popularity. But that’s partially because the breed is relatively unknown and there aren’t many breeders. In fact, if you do manage to locate a breeder, you’re likely to spend many months on a waiting list before you can even get a puppy!

Should you manage to locate a breeder and wait on a waitlist long enough to finally get an American Water Spaniel puppy, you should expect to spend between $1,000 and $1,500 for it.

Don’t forget the other things you’ll need as well, such as a kennel, collar, leash, food, bowls, and more. Luckily, when you purchase from a reputable breeder, extra expenses like microchipping and shots are already taken care of, so make sure to check for that with your breeder so you know exactly what you’re getting.

Unfortunately, because this breed is so rare, you’re unlikely to locate a puppy available for adoption. Breeders of American Water Spaniels tend to be very selective with customers, so they rarely end up in the wrong hands.

1. They were bred to work the Great Lakes.

These dogs have a thick, waterproof double-coat for a reason; they needed protection from the icy waters they were working in. The great lakes see temperatures well below freezing in the winter, and these dogs were bred specifically to jump into those freezing waters to retrieve waterfowl, including quail, duck, pheasant, and grouse. Suffice to say, the cold does not bother these dogs.

This breed has never been very popular. They’ve never even been well-known! For the most part, they were contained to the great lakes region where they were developed. Here, they were incredibly popular for retrieving waterfowl since they were perfect for the environment and could retrieve many birds in a day. But these dogs are pretty small, and larger retrievers from England started to become more popular, causing the American Water Spaniel to nearly die off.

Thankfully, the breed was saved by Doctor F. J. Pfeifer in Wisconsin. This breeder formed a breed club and helped to develop a breed standard book, which helped them to get accepted by the United Kennel Club in 1920. The AKC later followed suit in 1940. Curly Pfeifer, the very first American Water Spaniel registered by the AKC, was one of Doctor Pfeifer’s personal canines.

Even though the breed was saved from extinction, there aren’t large numbers of them today. In fact, there are fewer than 3,000 American Water Spaniels today. Breeders are very selective about who they sell these dogs to, ensuring that every owner is a great fit, but also limiting the breed’s expansion.

These dogs are highly intelligent with an easy-going demeanor that makes them seem generally friendly. However, that’s only with their families and people they’re well acquainted with. American Water Spaniels tend to be aloof and reserved with strangers.

Highly energetic and always ready to work or play, these Spaniels need tons of exercise to help release all that energy. They also need a lot of mental stimulation, so it’s best to keep these dogs busy with a job that will fulfill both of those needs.

While they’re usually friendly and playful dogs, American Water Spaniels also have an obvious stubborn streak. You need to make it clear who the alpha is, otherwise, one of these Spaniels is likely to walk all over you.

American Water Spaniels can form close bonds with several different family members, which is perfect since they need a lot of attention. They will become loud and destructive without plenty of exercise and human interaction. You’ll find that your American Water Spaniel will form the closest bonds with whoever spends the most time with them.

This breed also tends to do well with children, particularly if raised with them from a young age. They can be trained and socialized to accept a lot of different situations; they’re very versatile dogs.

These Spaniels can get along well with other pets, especially if they are socialized often and early. If your American Water Spaniel grows up with other pets, then they should be fine. They don’t have a high prey drive because even though they’re gundogs, these Spaniels were retrievers and they weren’t intended to chase down prey.

A post shared by The Adventures of Remi & Wini (@remi_and_wini)

Things to Know When Owning an American Water Spaniel:

Though they’re incredibly active and energetic dogs, American Water Spaniels aren’t very large, so they don’t need to eat too much food. In general, these dogs do great on a high-quality dry dog food that’s specifically formulated for active dogs. This type of formula should provide all the nutrients that your active pup needs to remain healthy.

To avoid overfeeding, you should split your dog’s feeding into two or three separate meals throughout the day. An American Water Spaniel should need around one to two cups of dry dog food each day, depending on the food and the size of your Spaniel.

When it comes to exercise, American Water Spaniels are about as high-maintenance as they come. These dogs will need at least an hour of exercise every day, often twice that. If you don’t have that kind of time to devote to your dog, then this breed probably isn’t the best fit for you.

Because of their excessive exercise needs, this breed is best suited for hunters and extremely active individuals and families. It can be difficult for the average person to keep up with such a demanding dog.

American Water Spaniels are highly intelligent dogs that want to please, but that doesn’t mean they’re always easy to train. These dogs can be very stubborn and often downright mischievous, making them more difficult to train than most breeds. You’ll need a firm hand and plenty of previous dog-training experience if you want to take on one of these difficult to train dogs.

If the high exercise demands of this breed weren’t enough, they also need excessive levels of grooming and maintenance. They have a thick double-coat that’s meant to protect them from freezing waters and underbrush. You’ll need to brush it regularly, so it doesn’t become tangled or matted.

In the spring, they’ll be dropping all that hair, so be prepared for a lot of mess around the house. Keep up with regular brushing to minimize the mess as much as possible.

Because their coats are waterproof, they produce a lot of oils that help repel the water and keep them warm. Those oils are important, but they can also get on your furniture when your dog brushes against it. And you don’t want to bathe your American Water Spaniel too often or you’ll wash these important oils off.

Like all dogs with droopy ears, these Spaniels are prone to ear infections. Make sure to clean their ears regularly with a cotton ball and a veterinarian-recommended ear cleanser.

Unfortunately, the American Water Spaniel is susceptible to quite a few health concerns that you’ll need to keep an eye out for.

American Water Spaniels are highly intelligent dogs that can be trained to perform demanding tasks in inhospitable environments. Their rugged double-coats keep them warm in subzero temperatures and can protect them from underbrush, but they also require lots of upkeep. Likewise, they’ve got loads of energy that makes them fun and playful, but they also need excessive amounts of exercise to temper all that energy.

If you have plenty of space and hours of time to devote to your dog, then the American Water Spaniel’s easy-going temperament and willingness to please make them a great pet. They’re ideal if you’re a hunter in freezing climates, but might not be a great fit for the average dog owner.

Doberman Pinscher vs. German Shepherd: Which Dog to Choose?