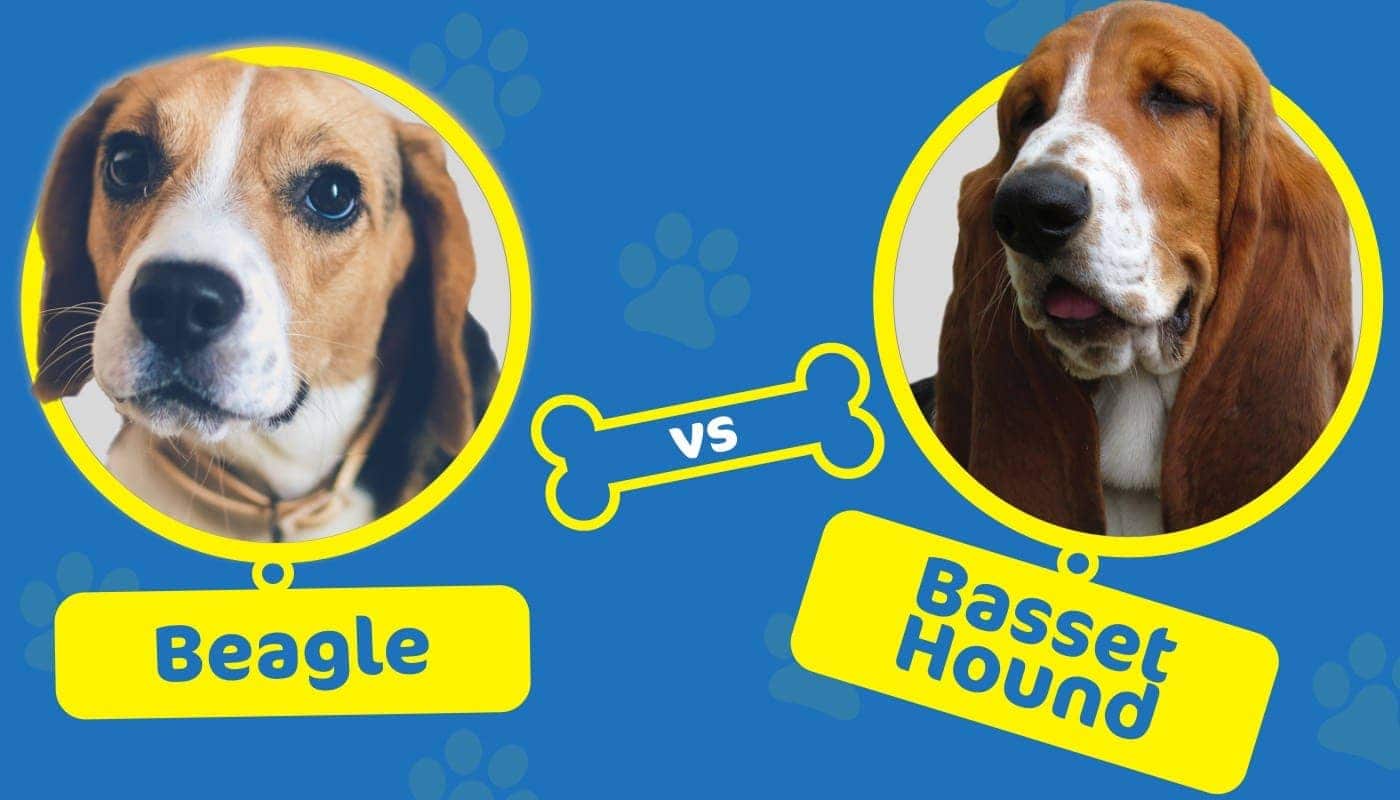 At first glance, it’s easy to see how people commonly confuse the Beagle and the Basset Hound. They’re both relatively short dogs with a similar color pattern. And they even share some similar physical traits.

However, upon closer inspection, you’ll find that these pups—although both scenthounds—are worlds apart. From the size and build differences to personalities, these breeds have their distinctions which make them unique.

Let’s take a quick look at their physical differences and vital stats before jumping into the details of Beagles vs Basset Hounds!!

In the American Kennel Club’s most recent ranking of the most popular dogs across America, the Beagle found its way into the top ten. And honestly, there’s no surprise there. Beagles have been among the most popular dogs in the United States ever since they were first introduced in the 1840s.

However, that’s only their American debut. The Beagle has been around much longer with roots that can be traced back to medieval times. The word “beagle” was commonly used to refer to all small hounds. These beagle hounds were extremely different from the Beagle we know today. There were even some varieties known as the Pocket Beagle which were small enough to fit inside of a purse or saddlebag. These are no longer around, although some breeders are attempting to genetically recreate them.

The modern Beagle can be traced back to a singular pack of dogs out of Essex, England owned by the Reverend Phillip Honeywood in the 1830s. They were originally trained as scent hounds to track down rabbits, foxes, and other small game. Since then, the Beagle has surpassed its humble beginnings and has found its way into superstardom.

Beagles are one of the main go-to dog breeds for pop culture. They’ve made appearances everywhere from the Starship Enterprise to Inspector Gadget. However, the title of “World’s Most Famous Beagle” goes to none other than Snoopy. Known worldwide, this beloved Peanuts character is forever etched in our minds and is often the most thought of character in that entire comic strip. But Beagles don’t just make their mark in pop culture media. There have been many real-life Beagle stars as well. Some of the most famous were those of President Lyndon B. Johnson.

When it comes to unique personalities, it’s hard to find a breed more eccentric than the Beagle. They’re goofily loveable with their playful attitudes and clownish behavior. However, they can be quite stubborn. They’re mischievous little rascals who just love doing things their way—except when you’re gone.

These pups have an instinctual need to be with their people all the time. This is why they can also exhibit the greatest separation anxiety out of any dog breed. If you need to leave your Beagle alone for an extended period, there could be problems. Beagles tend to turn towards destructive behaviors such as chewing, shredding, and other general mayhem to help cope.

However, they won’t stay mad at you for too long. Because as soon as you return home, you’ll find them doing their best to catch up. Beagles are also wonderful dogs for families and are excellent with children. Their playful, patient nature allows them to get along with kids of any age, and they do great with other dogs. Although, you may find that your Beagle becomes the dominant personality amongst your other canines.

Also, if you’re looking for a quiet dog, this is not the breed for you. Beagles love to be heard! And they don’t have a standard bark either. Instead, you’ll hear them baying over every little issue. Whether a stranger is passing by or a bug has flown past them, they’ll be sure to let you know.

Beagles are highly intelligent dogs and have a nose that can track just about anything! You’ll often find Beagles in airports searching for illicit substances and contraband. And that’s because the Beagle has the third-strongest nose out of every other dog breed trailing only behind the Basset Hound and Bloodhound. And to learn how to complete these difficult tasks, Beagles must undergo rigorous training.

However, that doesn’t mean it’s going to be an easy road. Beagles are notoriously stubborn and don’t always take to training very well. Despite being people-pleasers, they just love doing things their way—it’s part of their charm. But dog trainers and Beagle owners alike have found a secret to keeping their Beagles in line — food!

Beagles are extremely motivated by food and treats—even more so than hugs and praise.

When it comes to breed maintenance, the Beagle is relatively easy to care for. They aren’t hypoallergenic, but they don’t shed too much to require dedicated daily brushings. A quick once over with a slicker brush twice a week should keep your Beagle groomed. Also, they don’t require heavy bathing either—just when they need it. Now, this could be more often than not though. Their curious nature leads them into many different smelly places such as bushes, dirt patches, and garbage.

As far as ailments and diseases are concerned, the Beagle is a pretty healthy pup. They’re not as sickly as other breeds, but they do have a few issues you should be on alert for. Beagles are prone to back and joint issues such as patellar luxation or Intervertebral Disc Disease (IVDD). They are also more likely to develop eye malaise such as glaucoma.

This clownish pup is perfect for families with children of all ages who are willing to put in the time needed to train them. They’ll definitely need patient owners due to their innate stubbornness, sassy personalities, and propensity to bay at just about everything. Beagles also really hate being left alone. So, if you have to make regular long departures, this might not be the breed for you.

Although the Basset Hound looks similar to the Beagle, they are very much their own breed. The name Basset comes from the French word bas meaning “low” and when combined with the -et suffix, the name literally translated to “rather low”. And it’s super-easy to see why. These little stubby hounds have squat, short legs and tummies so big they often drag the ground. Bassets are also scent hounds. And when they’re tracking with their nose in the dirt, they get even lower than normal.

The modern-day Basset Hound originated in France in the 1800s as a direct descendant of the St. Hubert’s Hound. However, short-legged hunting hounds such as these have been around much, much longer. In fact, the earliest depictions of Basset-like hounds have been found in hieroglyphs from the Middle Kingdom of Ancient Egypt! Mummified remains of these ancient hounds have also been found at the Dog Catacombs of Saqqara.

Like the Beagle, the Basset Hound has made an impact throughout pop culture. You’ll find Bassets in TV shows and movies such as Smokey and the Bandit, The Dukes of Hazzard, and several animated Disney films. The Basset Hound is also the official mascot for the shoe brand Hush Puppies—a name that Bassets are often referred to as.

Although there are some pretty glaring differences between the Beagle and the Basset, this is where they really start to separate themselves. Beagles are excitable, bouncy pups that love exploring and adventure. And you’ll be hard-pressed to find a list of the laziest dogs ever without the Basset Hound being on it—normally near the top.

Basset Hounds absolutely love to snooze. If they’re not actively tracking, there’s a good chance you’ll see them laying on their favorite rug drooling on the floor. And we don’t blame them one bit. Despite their short nature, Bassets can be quite heavy, weighing up to 65 pounds. Imagine dragging that around on tiny little stumps!

However, that’s just part of their charm. The Basset’s sleepy nature also makes them great for families with children or other pets. They just don’t have the motivation to pester, harass, or otherwise make trouble. And they’re even super-patient with younger kids!

Like most scent hounds, Bassets have a one-track mind once they’ve caught wind of a trail. They go wherever it may lead, whether you want them to or not. They’re super independent in that respect. This can also make them very difficult to train. It’s not that they don’t want to follow your commands. But they’re so laser-focused on other things.

They don’t necessarily have any temperament issues when training either. It’s just that they’re completely dedicated to a particular cause or don’t have the motivation to do much of anything else. There’s not too much gray area with the Basset Hound.

When it comes to caring for and grooming a Basset Hound, you’re going to need to put in a little more work than with the Beagle. And that’s because of the several skin folds and wrinkles that Basset Hounds have. These wrinkles are the perfect breeding ground for bacteria and great places for dirt and grime to weasel their way into. You’ll need to take extra care when grooming and cleaning them to ensure you get underneath each and every fold. And it’s not just bathing them, but drying them off as well. Plus, you’ll need to pay particular attention to cleaning out their ears. Inside of their giant floppy ears is another ideal location for unwanted bacteria.

Generally speaking, the Basset Hound is a relatively healthy dog. But they do suffer from particular ailments brought on by their unique size and stature. Bassets can easily become arthritic as they support a large weight on smaller legs. Their build also leads to IVDD and patellar luxation, like the Beagle, but with a higher risk.

If you’re looking for a low energy dog pup, then the Basset Hound is perfect for you. They also make great family pets due to their caring and patient nature. However, you must be willing and able to dedicate the proper effort needed when cleaning and grooming them. They’re not low maintenance dogs. So, if that’s what you’re looking for, you may want to consider another breed.

Beagle vs Basset Hound: Which Should You Choose?

When deciding between the Beagle and the Basset Hound, there are three major points of comparison to consider.

Size is a very strange concept when comparing these two breeds. On one hand, you’ve got the taller, leaner Beagle. And on the other, the stout Basset Hound. Although the Basset Hound is just about the same height as the Beagle, they can weigh over twice as much! This means that they’re going to need more food—which will ultimately be more expensive.

However, a Basset Hound doesn’t need as much space and room as a Beagle. So, they may be a better choice for smaller living quarters.

As far as price is concerned, both breeds are relatively inexpensive. A Beagle is the more wallet-friendly of the two, costing roughly $550 for a puppy. The long-eared Basset Hound tends to run for around $700.

This is the real kicker when deciding between a Beagle and a Basset Hound. Beagles love to run and jump and play! And sometimes, it seems like they have limitless energy. The Basset Hound, on the other hand, is the epitome of laziness. Sure, they’ll love a good 20 to 30-minute walk. But that’s all they need each day. If you’re looking for an active dog with more spunk, the Beagle’s the best way to go.

Whichever way you decide, both breeds are excellent family dogs with lots of love to give. However, you’ll need to choose between goofy and bouncy or lovably lazy.

Can Dogs Eat Curry? Is Curry Safe for Dogs?