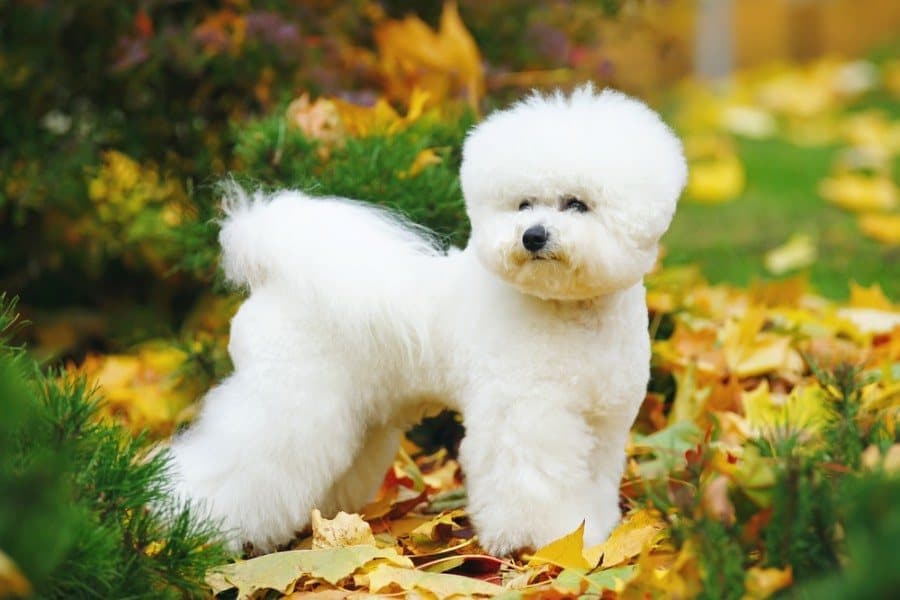 The Bichon Frise is a puffy white dog with a doll face and a forever smile. They always have curly white or cream fur. With their happy-go-lucky personality, these dogs have been a beloved pet for centuries.

The Bichon Frise is a French name, derived back in their supposed beginnings. However, they can also be called the Tenerife Dog, Bichon Tenerife, or the Bichon a Poil Frise. The latter translates literally from French to mean “curly lap dog.”

Bichon Frise Puppies — Before You Welcome One Into Your Family..

3 Little-Known Facts About the Bichon Frise

1. The Bichon went through remarkably different ownerships throughout their history.

We are not sure of the origin of the Bichon Frise. It is thought that most of their development to how we know them today occurred on Tenerife, which is the biggest of the Canary Islands.

It was there that the Bichon Frise became a favorite of the sailors, which is where the name the Bichon Tenerife comes from. These dogs are believed to be the principal ancestors of the dogs that we know today.

As they began to travel with the sailors, they were effectively imported into much of Europe. It was around this time during the 13th century that they became more well-known. It was also at this time that they formed their association with a nobility all over Europe. They were favorite pets to nobles and royalty alike in Spain, Italy, and France.

During the Renaissance, these dogs became a symbol of class and culture. With their curious personalities, they embodied part of the human focus during the era and endeared them to everyone they encountered.

As with many other breeds that were well-liked in France and the surrounding countries, the Bichon Frise fell from grace quickly during the French Revolution in 1789. Their masters and mistresses were led to jail or worse, the guillotine. These little dogs were then cast out into the streets.

Their newfound abode didn’t deter them, though. Since the dogs are so eager to please and talented, they were adopted by street actors and circus men. It is during this period that they become known as a performing dog. This reputation saw them lowered in the social rungs, and they became the dogs of only performers, disrespected by the wealthier classes.

This came to an end with the start of the World Wars. Just as many other dogs, the Bichon Frise suffered through. Enough devotees of the breed came together to rescue them from the streets and save their bloodlines.

They were brought to America in 1956 and were recognized by the AKC in 1972. Their popularity since then has never faltered.

2. They are set apart from other Barbichon types.

The Bichons are not unique but actually belong to a family of similar-looking pups. It can make them difficult to tell apart.

Their family members include the Havanese, Maltese, Coton du Tulear, and the Bolognese. Unlike the rest, these pups are the only dogs with a double coat of hair. It makes their coat curly and thicker instead of flat and wavy.

The double coat is a feature that is good for dogs destined to be in harsher climates. It helps them moderate their temperature in hot regions, especially those known for long periods of cold.

3. These pups are hypoallergenic.

No dog is 100% hypoallergenic, so it is still important to allow yourself a trial period when adopting a new dog. However, Bichon Frises are frequently cited on lists with the best dogs that are hypoallergenic.

Even with their double coat, Bichon Frise dogs don’t shed. It makes their grooming and maintenance more intense because you have to help them manage all of that hair — it doesn’t naturally fall out. Still, these dogs are an excellent option for people who generally have pet allergies.

Temperament & Intelligence of the Bichon Frise 🧠

These dogs are one of the best-natured pups that you can find. They are bouncy without having energy needs that make them higher maintenance. This overall pleasant attitude is what makes them such an excellent companion dog.

Bichons are patient but always want to be the center of attention. It is why they made such great performers and why they still take such joy in showing off their little tricks. They want to be loved and have a great deal of love to give their family.

It should be noted that they have a headstrong personality that does instill them with an independent streak. They are a sort of an enigma, though, since they also commonly suffer from separation anxiety.

As long as people are around, this dog is happy and playful. Their curiosity is expansive, so make sure you can keep them entertained, so they stay out of trouble.

These dogs make more than satisfying family pets. They are intelligent and learn boundaries quickly. Since they are such a relational dog, they will quickly figure you out, as well as all your family members.

These dogs tend to behave well around kids. Since they are such a comfortable size, they don’t pose much danger to children even if their patience starts to grow thin. Still, make sure to work with both the dog and the children on how to behave appropriately with each other.

The Bichon Frise likes to focus in any room, so sometimes they may get jealous of other animals. Usually, this manifestation is cute, but if it isn’t treated correctly, they might become nippy and more aggressive.

Just as with all other dogs, early socialization is key to behaving well around other pets. These dogs can get along well with dogs and cats, but it should be part of their training for higher success rates.

Things to Know When Owning a Bichon Frise

The Bichon Frise is not a highly active dog. Their personality is bouncy, but they don’t often manifest this in highly active ways. Their activity level, paired with their small size means that they only need about 1 cup of food each day.

To encourage continued health, especially in their bones and muscle tissue, feed them high-quality food. Bichons like to be spoiled, but too much can have a major impact on their functions.

Feed them dry food more than wet food or snacks. The kibble is bulkier and fills them up more, so they will only eat what they need.

These dogs are not lazy; they simply don’t need as much activity as other similarly sized dogs. Since their legs are so little, they often have no problem with short walks throughout the day to meet their needs.

Try to give your pet at least 30 minutes a day of consistent activity. If you like to take them out for walks, aim for around 7 miles throughout the week.

Training these pups strongly depends on your relationship with each other. The reason for this is that without respect, their proclivity for being stubborn can rise to the surface with frequency.

Don’t let their headstrong attitude sway you, though, and they love to learn new things. They want to please you overall. Make sure during training to give them plenty of praise and never negatively react at mistakes.

Every other aspect of these little dogs makes them great for first-time owners other than their training tendencies. If one of these is your first pup, make sure to start prepared and firm with your training sessions. Consistency is essential.

The grooming of these dogs makes them a bit more high maintenance than most. However, it is because of this that they are more hypoallergenic than most. They don’t shed, so their hair needs extra attention.

You can decide to take charge of this yourself, or you might want to find a groomer within your budget. Since they have a double coat and their hair is so white, they need to be brushed thoroughly at least two times a week.

Every time these dogs get dirty, you need to give them a gentle bath. To keep it pain-free, brush them out before they hit the water. Use a sensitive shampoo to keep their skin and hair healthy.

Otherwise, much of their care is what is typical for all other dogs. Check and clean their ears once a week to keep the wax free and healthy. Brush their teeth daily or at least twice a week. They tend to suffer from dental diseases more than other breeds.

Bichons do exhibit some discharge around their eyes, nose, and mouth. For them to look as presentable as possible, clean their face daily with a gentle rub down with a damp towel. Keep their nails trimmed to keep their paws healthy.

Bichons are reasonably healthy dogs overall. If you purchase your dog from a breeder, check into their parent’s health records. These make it more apparent if your potential pup will suffer from any specific condition.

Take them to their vet appointments annually or biannually to catch any diseases as early as possible. It always signifies a higher likelihood that it will be treatable.

There are not many personality differences between males and females of this breed. Some believe that males get more attached to their people and form bonds faster, whereas females can be standoffish or more independent. Each dog is different, though.

Their size does not differ much between genders. Both males and females grow to an average height of 9 to 11 inches. Males are a tad heavier, weighing between 11 to 16 pounds and females 10 to 15 pounds.

If you need joy in your life, you should bring a Bichon Frise into it. They are some of the happiest dogs out there. They can be a good first-time owner’s dog, but you would also need to be prepared to work hard at bonding and training.

These dogs can tend to be yappy at times, especially since they like to be the center of attention. They need only a moderate amount of exercise but a great deal of mental stimulation since a bored Bichon is a naughty Bichon.

With TLC, any one of these white puffballs can look like an impressive show dog.