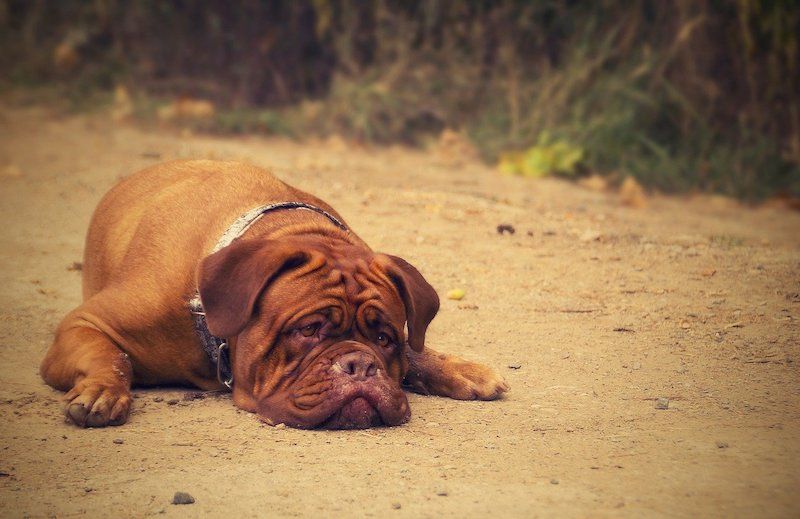 A massive-headed dog with a heart of gold, the Bordeaux Pitbull carries the exaggerated physical traits of both of its parent breeds: the Dogue de Bordeaux and the Pit Bull. At first sight, they might look ferocious, but their temperament around their “pack” family is anything but. Kind-hearted and absolutely devoted to the safety and well-being of their families, these dogs can be remarkably tender or fiercely protective depending on the situation at hand.

Of course, Pit Bulls deal with a strong stigma associated with the breed, often being thought of as inherently violent and aggressive. In the Bordeaux Pitbull, you’ll see nothing of the sort. Predisposed to be a gentle giant, with just a little bit of early life socialization they can easily learn to get along well with other dogs and even smaller animals.

If you’re curious to know more about this beefy, muscular, and soft-hearted breed, read on.

Bordeaux Pitbull Puppies – Before You Get One

With purebred dogs, it’s fairly easy to get a clear view of what you can expect from owning one thanks to many generations of other owners’ experience. For designer dogs like the Bordeaux Pitbull, however, it’s not quite as easy. Because they’ve only been around for a few short decades, many characteristics of the breed haven’t completely stabilized, so you’ll see more variability in their temperaments and behaviors.

A better idea, then, is to closely examine the personalities and characteristics of both parent breeds and compare this with their crossbred offspring. With that in mind, let’s look at both the Dogue de Bordeaux as well as the Pit Bull.

One of the oldest French dog breeds, the Dogue de Bordeaux – variously known as the Bordeaux Mastiff, French Mastiff, or Bordeauxdog – is descended from ancient molossoid dogs. Making their way to France by way of Greece, these molossers were bred with local dog stock to produce the heavy and powerfully muscular Mastiff.

From pulling carts laden heavy with goods to guarding herds and protecting castles, the Dogue de Bordeaux has been put to work throughout much of French history. Indeed, they seem happiest when they have a job to do – even if this is something as simple as keeping watch over your house while you’re away. Remarkably loving despite their intimidating appearance, the Dogue de Bordeaux is an intensely devoted and protective breed of dog.

Pit Bulls, on the other hand, don’t have nearly so clear an origin as the Bordeaux dog. Descended from one of any number of crossings between bulldogs and terriers, the Pit Bull category contains both formal breeds (such as the American Pit Bull Terrier, American Bully, and Staffordshire Bull Terrier) as well as informal hybrids.

Originally developed as fighting dogs, Pit Bulls had the dubious job of holding down the heads of larger animals. Though long kept as blood sport dogs, their reputation as an aggressive or violent breed is not so clearly deserved. In fact, the American Veterinary Medical Association makes it clear that “controlled studies have not identified this breed group as disproportionately dangerous.”

Pit Bulls are at their happiest when they have a job to do, making them a natural choice as guard dogs. As far as temperament is concerned, their characteristics run the gamut from playful to reserved, energetic to lazy, and loving to standoffish – all depending on the specific breed line that they come from.

Combining these aspects, then, the Bordeaux Pitbull is a large and muscular breed that has a strong need for work and responsibilities around the home. They take eagerly to training and display such strong devotion that some have been known to follow their owners from room to room to make sure that they’re safe. Once they feel completely comfortable with their families, many Bordeaux Pitbulls become oversized lap dogs intent on cuddling their owners within an inch of their lives.

3 Little-Known Facts About the Bordeaux Pitbull

1. Mixed breeding has improved the health of both parent breeds.

A wonderful example of how designer dogs can improve on the health of their parents, the Dogue de Bordeaux avoids the breathing problems of its French ancestry via the mixing with longer-snouted Pit Bulls. Additionally, many of the hip and knee problems that Pit Bulls might experience are lessened by the robust musculature inherited from the Dogue de Bordeaux.

2. Their skin can be wrinkly, tight, or somewhere between the two.

Dogues de Bordeaux are known for their loose-hanging, wrinkly skin, while Pit Bulls generally have taught and firm skin. In the combination of the two for this breed, neither consistently wins out over the other, with some puppies having tons of wrinkles while others are completely smooth. And while wrinkles are adorable, they can lead to certain skin conditions that smooth-skinned dogs are not at risk for.

3. You may know the famous Dogue de Bordeaux from Turner & Hooch

The 1989 movie starring Tom Hanks as a police officer and a Dogue as his massive-headed canine partner is largely responsible for the breed’s modern resurgence. Prior to the popular success of the movie, it was estimated that there were no more than 600 Dogues de Bordeaux left in the world; now, they’ve taken hold in America and been recognized as a pure breed by the American Kennel Club.

Temperament & Intelligence of the Bordeaux Pitbull 🧠

A sturdy guard dog with alert senses, a devoutly protective nature, and a gentle disposition towards its family, the Bordeaux Pitbull is a moderately intelligent breed that loves having a job to do. While they can be standoffish with strangers, once they warm up to a person it’s not uncommon for them to cuddle on the couch while watching television. Providing them with regular and consistent training will sharpen their senses and quickly deepen your bond.

Bordeaux Pitbulls make excellent family dogs thanks to their inherently gentle treatment of children. More than anything, they’re protective of their pack – and when this includes your family, they’ll be constantly inclined towards making sure everyone is safe and sound in whatever they do. Because of their large frames, however, it’s always necessary to keep a close eye on them around children to prevent any accidents.

This breed is generally tolerant of other dogs if socialized from a young age and can even be trained to protect small animals. They’re not very fond of strange animals, though, and can take quite a while to warm up to new faces and smells.

Things to Know When Owning a Bordeaux Pitbull:

After getting to know a little bit more about their personality, are you intrigued by the Bordeaux Pitbull? If you’re thinking that one of these dogs might be an excellent addition to your home, read up on the following topics to prepare yourself for their health and maintenance needs.

Owing to their massive size, Bordeaux Pitbulls have an equally gigantic appetite! Expect to feed them around four cups of high-quality dry dog food per day, preferably one that is specially formulated for large breed dogs.

Like many large dogs, this breed tends to eat much too quickly, giving itself uncomfortable bloating and digestive issues. Split their total food for a day into three or more meals and consider buying them a slow feeding mat as well.

Regular exercise is critical for keeping large dog breeds from gaining weight and becoming obese. Plan on at least an hour a day of moderate to vigorous activity, such as playing fetch and going for long walks. Because they like having a job to do, equipping them with a weighted vest for walks will make them easier to lead and happier as well.

Except for the occasional stubborn streak, Bordeaux Pitbulls are generally eager to please and take easily to training. Though not renowned for their intelligence, they can pick up simple tricks quickly and thoroughly enjoy learning new commands. Always socialize them from a young age, and consider enrolling them in obedience lessons to get more exposure to time spent around other dogs.

Grooming requirements will range from almost none for tight-skinned Bordeaux Pitbulls to significantly more for those with loose skin. In either case, weekly brushings will help keep their shedding to a minimum and coats well-oiled. For loose-skinned dogs, you’ll need to regularly bathe and scrub them, drying fully to prevent any development of mold or bacteria in their folds.

It’s a lucky situation to have the relatively long-lived Pit Bull as part of this designer dog breed because the average life span of all Dogues de Bordeaux is a sad six years. By combining the genes of two breeds, many of their health conditions are alleviated. Still, the following problems may occur:

Male Bordeaux Pitbulls will almost always be on the larger side of both height and weight, though this is determined more by which side of their family tree they take after than by their sex. The same can be said to be true of their temperament, with many different personality quirks being the result of individual heritage rather than sex.

If you’re trying to find a gentle giant with a unique heritage, the Bordeaux Pitbull certainly fits the bill. Defying expectations on many fronts, they’re a generally healthy dog breed with little to no tendencies towards aggression. Good with kids and always happy to help out around the house, they make excellent guard dogs as well as wonderful snuggle buddies.