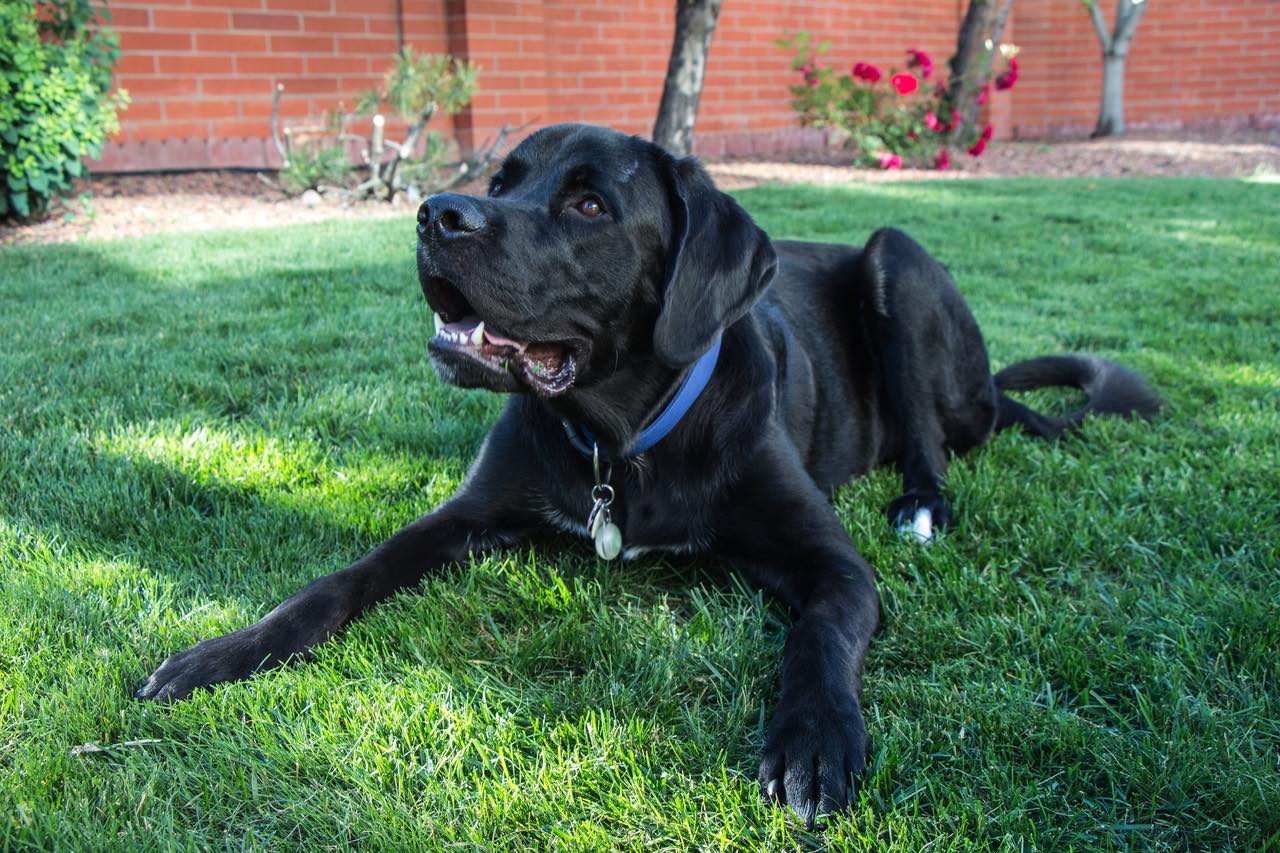 What happens when you breed two of the most iconic dog breeds in history? You get an incredibly cute but gigantic puppy — the Labernard.

This designer dog is the offspring of the instantly recognizable Saint Bernard and the equally popular Labrador Retriever. Saint Bernards are so famous that several have even been movie stars, including Beethoven and Cujo, while Labrador Retrievers are considered to be the most popular dog breed in many countries.

The Labernard takes qualities from both parents, resulting in a gigantic teddy bear of a dog that’s as intelligent as it is friendly. They also make excellent working dogs, which makes sense since both parents were bred to work.

Saint Bernards come from the Swiss Alps originally, resulting in the thick double-coat that Labernards sport. Because of this, they’re much better suited to cold climates and won’t do as well in hot places.

Standing as tall as 32 inches and weighing as much as 220 pounds, these dogs are practically the size of small bears. But they’re affectionate and loving like Saint Bernards, even if they have more energy from the Labrador side of the gene pool.

Labernard Puppies – Before You Get One…

1. Both parent breeds save people.

There’s a long history of dogs saving people, in fiction and real life. From the imaginary Lassie to the very real Balto, dogs have saved individuals and entire towns before. But the Labernard is special because both of its parent breeds have saved people.

When it comes to rescue dogs, few dogs have as many lives to their name as Saint Bernards. Originally from the Swiss Alps, these dogs were used for many years to rescue people that got trapped in the mountains, often deep in snow.

The Saint Bernard breed is credited with around 2000 lives saved. Barry, the most famous Saint Bernard, saved 40 lives on his own. As the tale goes, he was killed accidentally by one of Napoleon’s soldiers who stabbed him with a bayonet after mistaking him for a wolf. However, in reality, he died a much less fantastic death in his bed at a ripe old age.

Labrador Retrievers are one of only a handful of breeds that have been known to sniff out cancer. The volatile organic compounds (VOCs) in cancer have an odor that some of these dogs can detect. There are even many stories of these dogs licking their person repeatedly, only for them to soon discover a cancerous lesion in that area.

2. Their stubborn streak makes them hard to train.

Big dogs can be more difficult to train than smaller breeds just because of their large size. They’re much harder to control since they are so strong and can often yank their person around!

While Labernards are very intelligent dogs that have the ability to learn training commands, they’re also a bit stubborn. Of course, this is going to vary from dog to dog. But if your Labernard is one of the more stubborn ones, you can expect to have a more difficult time training them.

To properly train a stubborn Labrador St. Bernard Mix, you’re going to need nearly infinite patience. If this is your first time training a dog, you’d probably be better advised to pick a dog that’s easier to train, less stubborn, and perhaps a bit smaller as well.

3. The bigger your Labernard, the younger they’ll likely die.

Big dogs are incredible pets, but they have a serious drawback — they die much younger than smaller dogs. Unfortunately, it seems that the larger a dog is, the shorter their lifespan.

This doesn’t just hold true across breeds though, it’s even true of dogs within the same breed. Between two Labernard dogs, the larger one is most likely to die first. Worse still, they’re also more susceptible to a wider range of health concerns.

Temperament & Intelligence of the Labernard🧠

Saint Bernards are known for being pretty relaxed dogs, not very energetic or spunky without major exercise requirements. Labrador Retrievers, on the other hand, are a high-energy breed. They’re working dogs that need about an hour of exercise each day. Some might even go as far as to call them hyperactive.

When you combine these breeds, the result is a Labrador St. Bernard Mix that’s nearly the size of a Saint Bernard with a whole lot more energy and playfulness. But the Saint Bernard in their veins still shows through, giving the dog a lazy streak that sees them curling up beside you while you sit.

Labrador St. Bernard Mixes are also very affectionate dogs with a deep love for their family. They’re friendly to just about everyone, but they’re especially close with their people, forming deep bonds.

Because they’re such loving dogs, Labernards are an excellent pet for families. They don’t like to be left alone for long and may become destructive if they are. With a family, there’s likely to be someone home much more of the time than a single-person household. This allows your dog to receive ample attention, helping to avoid the destructive behaviors that may otherwise pop up.

You might think that a dog this size wouldn’t do well with other pets, especially small ones. But since they’re such lovers, Labernards tend to get along with just about everyone! This is even more true if you take care to socialize your dog properly from a young age.

Things to Know When Owning a Labernard

Like all big dogs, the Labernard has some pretty hefty food intake requirements. Luckily, they’re not the most active dogs, so they only need about three to four cups of high-quality dry dog food each day. Still, that can add up to nearly $100 worth of dog food each month, so keep that in mind before you add one of these giants to your family.

Though very large, the exercise requirements of a Labernard are less than that of other similar-sized dogs. Because of the Saint Bernard genes in a Labernard, they only need about 30 minutes of physical activity each day.

But since they’re so sizable, you’re going to need plenty of space to keep a Labernard. Thirty minutes of exercise may be enough, but they’ll still need to have room to move around and play when they need it. This makes them very poor candidates for apartment living. It’s just too big of a dog to squeeze into a little space.

Since they’re bred from two well-respected working dog breeds, it would make sense if Labernards were very easy to train. They’re highly intelligent, so they’re definitely capable of learning commands and obedience. But these are also very willful dogs. And due to their size, if a Labernard decides to be stubborn, you’ll have a hard time changing its mind!

You’ll want to start training your Labernard as early as possible to avoid potential problems with a stubborn pup. Moreover, training one of these dogs will likely require ample patience and is best tackled by an experienced dog trainer, not a first-timer.

Due to their thick double coat, Labrador St. Bernard Mixes require extensive grooming. They’re moderate to heavy shedders, so you’ll need to do a thorough brushing of their coat several times each week.

Aside from their coat, you’ll also need to keep an eye on a Labernard’s ears. Dogs with floppy ears can sometimes have problems with moisture and wax buildup. Weekly cleaning will help keep this issue at bay. Failure to keep up with it could result in an infection.

Crossbreeds tend to have fewer health conditions than pure breeds, but the Labernard still has some potential issues to keep an eye out for.

Bloat may not sound like a major deal, but it’s fatal for dogs if not treated immediately. With bloat, the dog’s stomach fills with gas and can even twist on itself. It requires immediate medical attention to either pump the dog’s stomach or surgically untwist their stomach.

Hip dysplasia is one of the most common health concerns that plague many dogs, particularly larger-sized dogs. The Labernard is a very large breed, making them susceptible to this debilitation condition.

With hip dysplasia, the dog’s hip forms incorrectly. As they age, this results in the femur no longer fitting within the hip socket as it should. Because of this, the bones rub together, limiting movement and causing significant discomfort or pain.

Unfortunately, there’s no cure for hip dysplasia. However, the condition can be managed and hopefully prevented from worsening.

On a less serious note, entropion is an eyelid abnormality results in the eyelids rolling inward. This can cause hairs to rub against the cornea, ultimately resulting in corneal ulcers and impaired vision.

There’s also ectropion. If you’ve ever seen a dog where the lower eyelids seem to droop, then you’ve seen ectropion. It affects dogs with loose skin the most, such as Saint Bernards. It can result in redness, excessive eye watering, and even eye infections.

There are very few differences between male and female Labernards. Temperamentally, it’s quite difficult to tell them apart. Physically, however, you can generally assume the larger Labernards to be male. But that’s not always the case. Even female Labernards can reach 200 pounds on occasion.

Labernards are giant canines that think they’re lapdogs. Weighing up to 220 pounds, this is one dog that probably won’t comfortably fit on your lap! But they’re incredibly affectionate, loving, and loyal, making them incredible partners and pets.

Bred from two working dog breeds, the Labrador St. Bernard Mix is an intelligent, albeit stubborn dog. They’re smart enough for advanced training if you have the patience to teach a willful dog that’s the size of a small bear.

While Saint Bernards tend to be very calm and docile dogs, Labernards show off some of their Labrador side with higher energy levels and greater need for exercise. If you can’t keep up with those needs, expect to have a destructive dog that’s capable of causing some serious damage due to their massive size.

Overall, Labernards are friendly, family-oriented dogs. They can be the perfect pets for active families that have plenty of time to provide ample attention and exercise the Labernard needs.