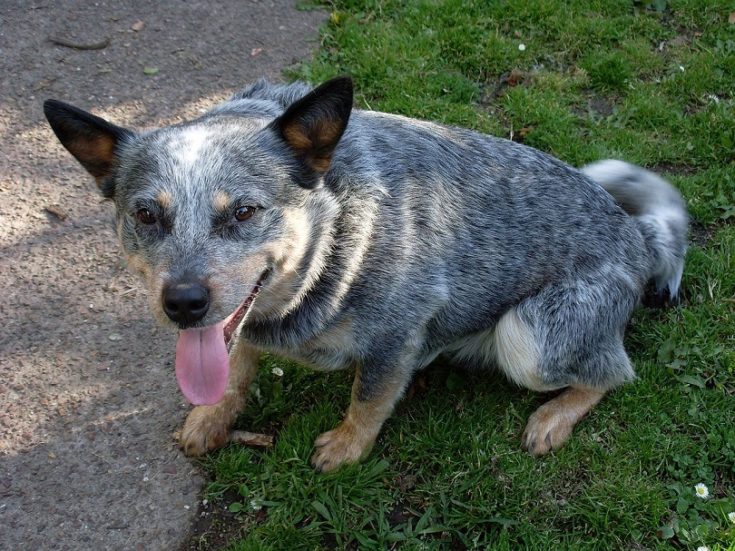 The Box Heeler is a relatively new designer dog breed. It is a hybrid of a Blue Heeler and a Boxer. Since it has been more recently developed, many of the traits associated with these dogs can be more accurately gleaned from studying the parental breeds. Since both of the parents are known to be hard-working dogs, a typical trait of the Box Heeler is that they appreciate having a job and will be more evenly balanced in a home where they can work. They are energetic, agile, and enthusiastic dogs: a pup with love for life.

Box Heeler Puppies — Before You Get One…

1.  Box Heelers may be intolerant of hot weather.

The extremely short hair on a box heeler often means that it is more difficult for them to self-regulate their temperatures and they are more prone to sun damage. Dogs with a moderate amount of hair have more protection from harmful rays and can insulate themselves, both from the heat and colder weather. If you have a Box Heeler or are interested in purchasing one, be sure that you can provide areas of shade for them if they are outside during hot days.

2.  Boxers were developed in Germany for dirty jobs.

Many designer breeds were not bred until recently. This lack of history often means that there is not much information on their shared characteristics. One of the parents of the Box Heeler is the Boxer, initially bred in Germany in the 19th century. Many believe that the German created the dog from a broad mix of other dogs, including Bulldogs, Mastiffs, Terriers, and perhaps Great Danes. The goal was to breed a dog of a moderately large size and muscular build, but an athletic body to work as bull-baiting dogs. When that practice was eventually outlawed, they were quickly adopted as an ordinary butcher’s dog, helping to herd the cattle and control them as they went through the slaughterhouses.

Nowadays, Boxers are commonly used as working dogs, having been one of the first breeds trained as a police dog. They also make for wonderful companion dogs and have even been trained as seeing-eye dogs and to aid those with other disabilities.

3.  Both parents have strong prey drives bred into them.

The Box Heeler often has the same high prey and herding drives associated with both of the parental breeds. They may even try to herd people around the house. This prey drive comes from the cattle herding history of Boxers, and the herding drive is from the Blue Heelers of Australia. Your Box Heeler puppy can make the perfect hunting companion or be ready to herd anything that walks if trained the right way.

Temperament & Intelligence of the Box Heeler🧠

The inherited traits from the parents of the Box Heeler makes for a playful dog who is alert and attentive to their family. They are known to be patient dogs, although they are often stubborn and have strong independent streaks inherited from their Blue Heeler parents.

Since Boxers may be hostile around new animals and people, it is vital to socialize your Box Heeler puppy early on. By participating in early socialization, you set your dog up for a more calm and content life, easily getting along with new dogs and being less hostile around other animals in general.

Both of the dogs involved in parenting the Box Heeler are quite intelligent and inquisitive. To satisfy a Box Heeler, they need physical attention and mental stimulation. Even if you don’t have a job for them to do, try to create something for them to participate in. Consider taking them to a dog park or training them on dog courses.

These dogs fit well into family scenarios, particularly those on the larger. Although they can be independent at times, they like to feel as though they are a functioning part of the pack, which is what you and your family will be to them. Box Heelers are quite gentle around things smaller than them as long as they are introduced well.

Box Heelers may get along with other pets as long as they are socialized from an early age. Still, for one territorial animal to get along with another, they need to experience other animals and strangers often. Socialization helps them respond positively to newcomers, no matter how fluffy they are.

Things to Know When Owning a Texas Heeler

Box Heelers need foods that are formulated to fit their needs. Look for foods that are high-quality and meant to feed large dogs with high amounts of energy. If they are treated as working dogs, they will need even more food to give them the endurance they need throughout the day.

Do not free-feed Box Heelers, to keep them from overconsumption. On average, an active adult will need around 3 cups of high-quality food a day. Try to sync this schedule with your eating schedule, or change it to morning and evening if that is easier.

Part of the energy of a Box Heeler is determined by the general amount of activity it experiences on an average day. A working dog is fit and accustomed to large energy outputs daily. However, this is taken care of by their daily routine. If the dog is a family pet, they need a moderate amount of exercise a day. Generally, take multiple walks around 30 minutes in length. They should be walked an average of 9 miles a week to keep them happy and healthy.

Box Heelers are thought to be an easier dog to train because of their bred-in tendencies as a working dog. They want to know the right thing to do and how to do that thing well. They can have stubborn and independent streaks. These traits don’t mean that they are harder to train, but they do need a firm hand in training that is consistent and strong with commands. Do not shout at or manhandle these dogs, as they don’t tolerate this well and often become even more strong-willed.

The coat of a Boxer is short, sometimes barely sticking out above the skin. A Blue Heeler can have fluffier coats with moderately long hair. The grooming of a Box Heeler depends on the coat that it has inherited. They often have short hair that is quite dense. Fur like this needs to be brushed at least once a week to limit any shedding. Use a pin brush or a firm bristle brush to get the job done. Bathing a box heeler should only be done if absolutely necessary to keep its skin healthy.

As with other pups, keep a watch on the length of its nails and trim them if needed. If it works outside frequently, this may not be necessary.

These dogs are often thought to be quite healthy, although they do have the potential to inherit common diseases experienced in either of the parental breeds.

There are no substantial differences in the personalities of the male or females of this breed. The males can grow up to 18 to 25 inches and may weigh up to 20 pounds more than the females. The females can stand up to 15 to 23 inches, often only slightly smaller than their male counterparts.

Although Box Heelers don’t have the extended history that purebred dogs often do, or even as far back as some other designer dogs can trace their ancestry, they are worth considering as the family pup. They are loyal and devoted to their pack, making them great friends to children. They should be socialized early on to behave appropriately around strangers, especially if you want to add more pets to the family later.

If you are looking for a working dog, these should be high on the list of considerations. If you take into account their hard work ethic, these pups would love to have a job on a farm or learn how to get through a dog obstacle. Consider these dogs if you need a solid presence of devotion and love incorporated into your family.