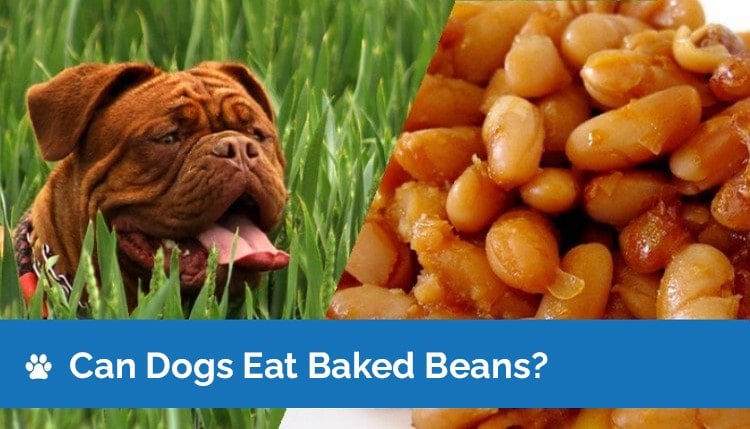 Are you thinking about giving your pup some baked beans? We strongly urge you to reconsider. This food is a minefield when it comes to potentially harmful ingredients. Of course, a lot depends on whether it’s a processed product or a homemade dish. Dissecting this question is an informative lesson about making the right decision for your canine BFF.

Dogs should not eat baked beans because many problematic ingredients can trigger an emergency visit to the vet. Let’s run down what you need to know to give insights about things you should look for in people foods. We’ll begin with the quintessential canned product, Heinz Baked Beans.

Baked beans are an all-American food created by American Indians. They used other ingredients, such as maple syrup and venison, to flavor it. The Pilgrims took it to the next level, adding bacon or salt pork. They also spiced it up to their tastes to prepare the dish that we know today. Interestingly, many of those same ingredients exist in modern renditions of the recipe.

Henry Heinz canned his signature recipe in 1886. It’s hard to believe that people considered it a luxury food. It made its way to the United Kingdom in the early 1900s. The rest, as they say, is history. Today, the company boasts a 70-percent market share in the UK alone. There’s even a museum dedicated to the product’s history.

What’s in the Can?

This recap provides the foundation for teasing apart this question if dogs can eat baked beans. Let’s begin with the American version of the product. According to the Heinz website, the ingredient list includes:

Several things probably jump out at you, such as raisin paste, onion powder, and garlic powder. All are toxic to dogs. We could stop there, but there are several other vital lessons from reading this label, namely, modified food starch and natural flavor. Manufacturers often source ingredients like these from multiple sellers. They follow the supply chain where it leads them.

Sometimes, modified food starch contains wheat. Other times, it is corn. Unfortunately, either one is a potential allergen for dogs. On the other hand, companies often source from different suppliers for this one, too. The only way to determine what’s inside the can is to call the manufacturer, providing a lot number to identify what they are. The same thing applies to the spices in the yellow mustard.

Everything else aside, we’re left with a few more red flags, brown sugar and molasses. That’s part of the reason that Heinz Baked Beans are a whopping 190 calories per ½ cup. Let’s put that figure into perspective. A 50-pound dog should get between 700–900 calories a day. That snack of baked beans takes up 21–27% of his total intake.

The Brits have a different version of the recipe that is more in line with their tastes. The UK company swapped out some sugar for tomatoes to bring its calorie count down to 78 calories. Its ingredient list includes:

While seemingly better, there are still those questionable ingredients, such as both extracts. You’re left with the same task with an international phone call to get more information. The case looks grim for giving your dog baked beans, no matter where you buy it. Let’s consider another option that puts you in control of what’s in the dish by making it from scratch.

Is Homemade Better or Safer?

The answer to this question is also that it depends—on the recipe. We looked up several of them online. They were all similar to the Heinz recipes, with a couple of notable exceptions. Most included onions or garlic, both toxic to dogs. One contained ketchup, which can also pose issues with sweeteners and possible allergens.

Of course, you can leave out the suspect ingredients and make a batch that is safe for your pet, albeit bland. However, there are a few additional caveats.

What About the Beans?

Let’s address the obvious question first. The best way to prepare beans for making the baked recipe is to soak the dry ones in a bowl of water, preferably overnight. Drain and rinse them well. Doing this simple step extracts the compounds responsible for creating their side effects. We also suggest boiling them alone in plain water for 2 minutes and covering the pot. Drain and rinse them again.

The next thing we need to investigate is the type of beans you use. Most of the recipes and commercial products we looked at contained navy beans. While those may be okay, ones to avoid include garbanzo beans or chickpeas. The reason lies with a potential link and a life-threatening condition called canine dilated cardiomyopathy (DCM).

There has been a spike in the number of cases in recent years, particularly with Golden Retrievers, mixed breeds, and Labrador Retrievers. It has prompted the US Food and Drug Administration (FDA) to investigate a probable cause. Their work has uncovered associations between DCM and grain-free, commercial dog foods that contain peas, lentils, chickpeas, or beans.

The investigation is ongoing, but we suggest playing it safe until researchers can explain the increase in DCM cases. Besides, there are so many healthier options for treats that don’t have the issues we’ve identified with baked beans.

We understand why you might want to share something you find tasty with your pet. After all, food is love. However, it’s probably best to scratch baked beans off of that list for a myriad of reasons. Your pup will do best on commercial dog food geared toward his nutritional needs without the worry of possible toxic ingredients.