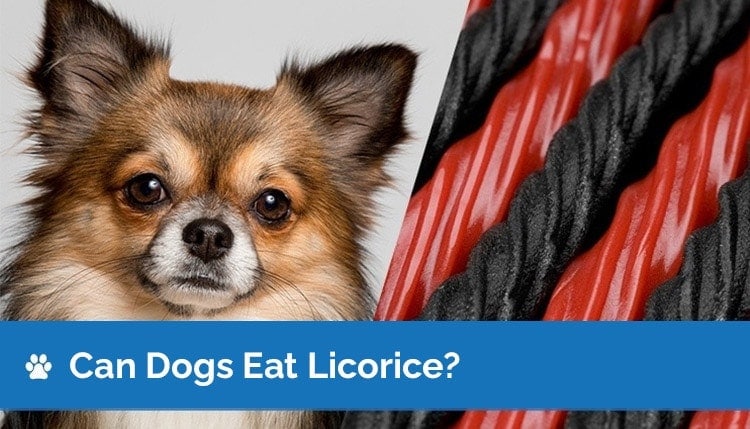 If you’re like us, you’ve gotten a headache from inconsistent answers about whether your dog can eat licorice. You’ve heard from some quarters that licorice root is an ancient miracle cure that can lessen allergic reactions, help with arthritis, and serve as an anti-inflammatory. From others, you’ve been told that even a bit of licorice could be seriously poisonous for your pup.

In this article, we want to give you the info we wish we’d had, and finally set the record straight about whether dogs can eat licorice.

Is black licorice safe for dogs?

No, dogs should not eat black licorice. In very small amounts, the actual liquorice root extract in the candy might have health benefits (read below for more information), but it’s toxic in large doses. Furthermore, the other ingredients are almost always junk for dogs.

To understand why you sometimes get conflicting answers to this question, it’s important to understand that black licorice candy has very little in common with the natural liquorice root — about as much as a Snickers bar has in common with a cacao bean. You can tell them apart by the spelling: licorice with a C usually means the candy.

The liquorice plant has served medicinal purposes ever since the golden age of Ancient Egypt. When archaeologists entered Tutankhamen’s tomb, they found fossilized liquorice roots. King Tut and his subjects, along with the Greeks and Romans, might have used liquorice to treat everything from sore throats to ulcers.

Wheat gluten and corn starch will fill your dog up without giving them any useful nutrition. Meanwhile, corn syrup and sugar put them at risk for obesity, doggie diabetes, and bad teeth.

Is red licorice safe for dogs?

No, for the same reason as black licorice: it’s mostly sugar and flour. Red licorice is actually worse since it doesn’t contain liquorice extract at all, removing the one ingredient that’s even slightly beneficial.

A post shared by The Sauce Is On (@thesauceison)

What if my dog ate licorice candy?

If your dog has gotten into a bag of licorice candy, it’s not the end of the world. If it was red licorice, the worst they’ll get is a tummy ache. It’s only when sugar and gluten form too much of a dog’s diet that their risk for diabetes and obesity climbs.

With black licorice, the risk is bigger. Licorice extract can cause high blood pressure and even poisoning. American black licorice is safer since it’s usually flavored with anise, which only harms dogs in huge quantities.

If the candy is European, though, watch your dog for signs of licorice toxicity. Symptoms include weakness, vomiting, lethargy, increased thirst, and excessive urination. If you observe any of these, take your dog to the vet.

Can dogs eat any liquorice at all?

Actually, yes! Despite the danger of licorice candies, liquorice might be as effective a treatment for your dogs as it was for the Pharaohs.

Take extreme care when giving liquorice root extract to a dog. The active compound, glycyrrhizin, can decrease potassium and increase sodium in the bloodstream, putting your dog at risk for high blood pressure.

However, these symptoms come from consuming an excess of glycyrrhizin over a long time — it’s not inherently toxic. Remember, all medicines are poisons with the wrong dosage. Over a short period of time (we suggest no more than two weeks at first), your dog can chew licorice roots and leaves without getting hurt.

What can liquorice treat in dogs?

A disclaimer: we’re not vets, and the science is still not completely settled on any of this. However, liquorice root has been observed to help dogs with the following symptoms:

Liquorice can treat almost any symptom related to inflammation. It will take longer than pharmaceutical steroids, and might not be as absolutely effective, but it’s a healthy alternative that only has side effects in extremely high doses.

How can I give my dog liquorice?

First, never do so without talking to your vet. They have your dog’s best interests at heart and will know whether or not it’s safe to give them liquorice root.

We’ve already mentioned letting your pooch chew on liquorice leaves or roots, but is that your only option? What if they just aren’t going for it? You’ve got choices. Liquorice extract can be applied either orally or topically.

To apply it orally, try one of these methods:

You can also apply it topically if your dog is suffering from an allergic rash:

As long as you’re following those two directions, and your vet doesn’t object, liquorice root can be the key to giving your best friend a more pain-free life. If you’ve tried treating your dog’s symptoms with the help of liquorice, let us know in the comments!