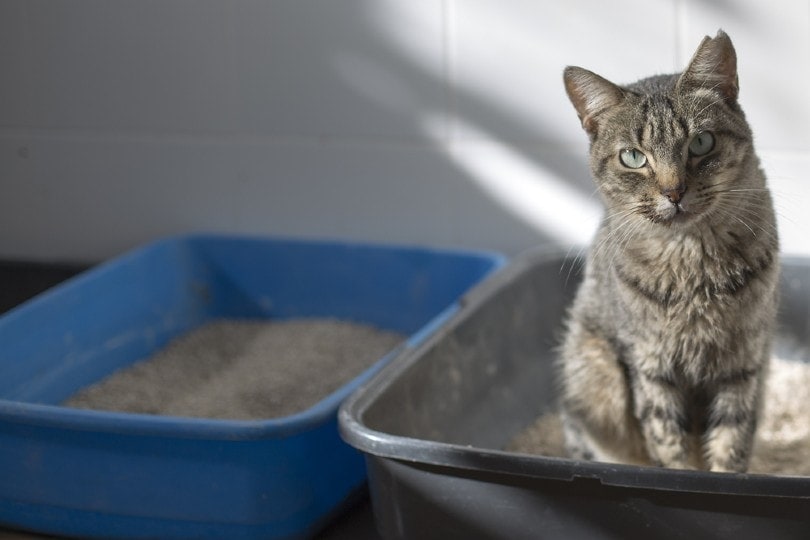 One of the questions we get most frequently from new cat owners is about the cat’s litter box, especially how many boxes you need and if you can put them next to each other. The short answer is yes. It is perfectly fine to put two litterboxes next to each other. However, keep reading if you would like to know how many litterboxes you need, why you need them, and where you should put them in your home for the best results.

How Many Litterboxes Do I Need?

While there is no rule stating how many litterboxes you should have in your home, most owners recommend having at least one per cat plus one additional one. You need more than one for a single cat because cats can be quite picky and may refuse to use a dirty litterbox and many people find it challenging to clean the litterbox every time the cat uses it. Many cats also like to pee in one box and poop in the other and providing it with more options will reduce the risk that your cat will relieve itself outside the box. We get one per cat because cats are extremely territorial and may not enjoy sharing a box with their siblings and having extra can prevent quarrels between them.

Another reason that a cat might like using more than one litterbox because they rely heavily on scent t mark their territory, and multiple litterboxes let them claim a larger area.

How Large Should My Litterbox Be?

Your litterbox needs to be big enough for your cat to turn around freely and dig when inside. Cats tend to avoid too small boxes and are more likely to toss the litter out while they use it, which can make a mess of your home. We recommend getting the largest box your budget will allow to allow your cat plenty of room. Larger boxes tend to be more durable and will likely last much longer than a smaller litterbox.

Where Should I Place My Litterboxes?

Your cats are clean and private animals just like you are and prefer to have their litterbox kept in a secluded area of the home free from traffic and prying eyes. We recommend in or near your human bathroom or in a lesser-used room of your home. The area should have at least minimal lighting so your cat can see what it’s doing and be less likely to make a mess. While cats do see much better than us in the dark, they cannot see when it’s pitch black, so keeping a small night light in the area will be helpful.

Can I Place the Litterboxes Next To Each Other?

In most cases, there should be no problem with placing two litterboxes next to each other, and you can use this configuration if it makes it easier for you. If your cat prefers a cleaner box or likes to pee in one and poop in the other, it can use its nose to determine which one it wants to use and will not mind if they are next to each other. The only time you are likely to have a problem with them so close together is if you have two male cats with a territorial dispute. When this happens, the dominant cat might claim the room as its territory and fight with other vats that try to enter, but this scenario is not too common and is unlikely to be an issue in your home.

Where Should I Avoid Placing My Litter Boxes?

You can place your litterbox almost anywhere in your home. It tends to smell quite bad, especially immediately after your cat uses it, so most people like to keep it out of the areas in the house where you spend a lot of time, like the living room and kitchen. Your bedroom is also a bad idea because the scratching will likely disturb your sleep, and the ammonia fumes can be strong even when your cat isn’t using it.

One more thing to remember when placing your litterbox is to avoid putting it in a corner. The walls can make it difficult to turn around and do its business, and you are much more likely to find poop and urine outside the box, and some cats will even use the wall as something to pee on. We recommend leaving several inches of space around your litterbox to make it easier for your cat to use.

Placing two litterboxes next to each other is fine and will still allow your cat to select boxes to use and will enable it to have one box for urine and one for poop. Your cat will have no problem keeping them separate. If you have more than one cat, add at least one box for each. Many cats will be in the same box as others, but they like to use their own for poop. Get the largest litterbox your budget allows to make sure your cat has plenty of room. If you have a large cat, like a Maine Coon, you can even DIY large disposable litterboxes out of cardboard boxes and litterbox liners.

We hope you have enjoyed reading over this short guide and have learned a little more about your cat. If we have helped you feel better about your cat’s bathroom facilities, please share our look into if it’s a good idea to place two litterboxes next to each other on Facebook and Twitter.