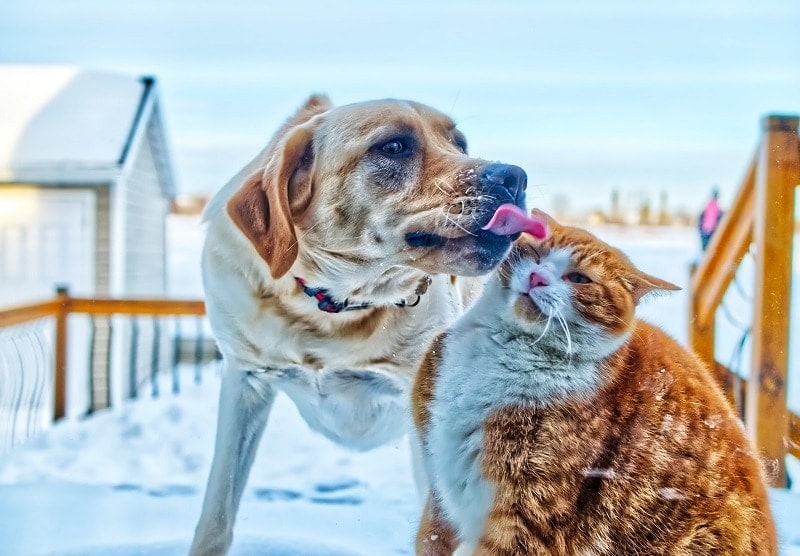 While some dogs will certainly chase cats, they rarely eat them. Instead, most dogs view cats as more of a toy. They’re something to chase a play with, though this sometimes leads to the cat’s demise. Dogs rarely eat cats unless they’re starving, which won’t occur in a pet that is well taken care of.

A stray dog may kill and eat a cat, as it doesn’t have any other food access. A dog with a full food bowl waiting at home usually won’t take the time to eat a cat, even if he does evd up killing it.

Dogs rarely eat other animals they kill as well unless they’re hungry. Chasing cats is more of a sport for dogs. It’s a game like chasing a ball. The dog probably isn’t even trying to kill the cat, but that’s what happens when they play too roughly.

Dogs can kill cats. This isn’t because they’re hungry or trying to eat the cat. Usually, dogs kill cats for the same reason that they shred their favorite chew toy—they just got too rough. This can be true even for dogs and cats that get along. Your dog might have gotten carried away playing, or the cat may have become injured by something else and could not escape the dog when the playing began.

Dogs likely kill cats more often when they’re injured or otherwise unable to fend for themselves. Some dogs may handle an injured cat the same way they handle a chew toy, leading to the cat’s death.

So, unfortunately, while it does happen, it’s not a common occurrence.

Why Do Dogs Kill Cats?

Though they are rarely utilized for hunting anymore, dogs still possess strong hunting instincts. Some breeds have more powerful hunting instincts than others. For instance, a greyhound is more likely to chase a cat than a Shih Tzu. That’s because Greyhounds were made to chase, while Shih Tzus were bred to be lap dogs.

The breed’s history and purpose matter. A breed born to chase can’t necessarily keep itself from chasing, even if it was well-trained. Even a dog that was raised around cats may chase a cat when it starts running. It’s their innate instinct.

Once a dog is chasing the cat, they’ll often use their teeth to grasp the cat if they catch it. They aren’t necessarily trying to kill and eat the cat. They’re just playing with the cat like it’s a chew toy. Sadly, this can sometimes lead to the cat’s death.

Dogs don’t kill cats because they’re mean or because they want to eat them. Instead, they’re just following their hunting instincts.

How Do I Stop My Dog From Killing Cats?

The best way to prevent your canine from attacking cats is to keep them away from cats. This means they will have to be on a leash at all times when cats may be present. If you’re going somewhere and know a cat may be nearby, you should consider muzzling your dog. (Though this is not an alternative to a leash, as a large dog can easily trample a cat while muzzled.)

You can also desensitize your dog to the cat. Usually, this involves having the cat somewhere safe but visible to the dog. Behind a glass door or window is a good option. Carriers can be used as well, though it can be dangerous if your dog gets to the carrier with the cat inside.

When the dog ignores the cat, you give them a treat. Eventually, the dog stops paying attention to the cat altogether because they want the food. You’ll need to do this in a variety of locations, so your dog learns to ignore cats everywhere, not just in your home.

Of course, a dog that has killed a cat should never be allowed near a cat unattended, even after training. You can only do so much to deter instincts.

Will My Dog Kill My Kitten?

It mostly depends on the dog. Some dogs have profound chase instincts, while others don’t. Some are rougher when they play, though others are not. You can desensitize any dog to a cat and train them to ignore cats for the most part. It is best to do this at the very beginning, as it is much harder to stop a dog from chasing a cat when they’re already used to doing it.

You should not leave the two animals alone together until the dog shows absolutely no interest in the cat. Even if the dog plays nicely, play can quickly escalate and may turn deadly if you aren’t there. The only dogs that can be trusted alone with cats are those without powerful hunting instincts who do not seem to care much about the cat’s existence.

Runt of the Litter in Dogs: Definition, FAQ & Health Implications

Crate Training a Puppy While at Work – Is it Cruel?