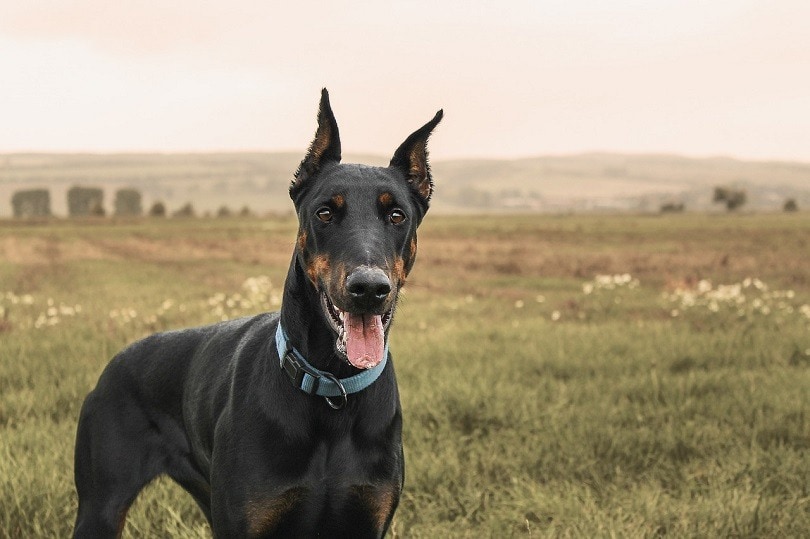 Sleek, stoic, and sturdy, the Doberman Pinscher is a natural athlete that is both a cuddly companion and a dedicated guardian. Known as “Dobies” to the folks that love them, Doberman Pinschers are highly acclaimed for their extreme endurance and have served as the official dog for the U.S. Marine Corps since WWII.

Despite its reputation as a ferocious watchdog (which certainly can be true!), the Doberman Pinscher is also incredibly gentle and can be great with children.

If you’re considering bringing home a Doberman Pinscher pup, here is everything you need to know about this legendary breed.

Doberman Pinscher Puppies – Before You Welcome One Into Your Family…

The Doberman Pinscher is a walking contradiction. Despite his reputation as a sinister breed, devoted Dobie fans rave about his commitment and capability of developing strong bonds with the entire family.

However, his bad rep is not completely undeserved. Doberman Pinschers are known to suffer from both health and behavioral issues due to backyard breeding. This is why it is so imperative that you buy a Dobie puppy from a reputable and quality breeder, not from a puppy mill or shady Internet ad.

Here are some steps you can take to ensure you’re receiving a healthy and happy-go-lucky pup from a trusted breeder:

Once you have found a breeder, they should:

Where it’s legal, many Dobie pups will have their tails docked between the ages of three and five days old. Before they turn nine weeks of age, their ears will be cropped. While this seems like a cruel endeavor, this is a historic practice that stems from the Dobie being a guard dog to create less ‘handholds” so that the attacker cannot easily ward him off.

3 Little-Known Facts About the Doberman Pinscher

Doberman Pinschers were first bred by a man named Herr Karl Louis Dobermann. He was a man who wore many hats: he was a dog catcher, policeman, and a tax collector. Due to his career having him lug around large amounts of money, Dobermann needed a canine bodyguard to keep him safe. Thus, the Doberman Pinscher was born.

A Doberman named Kurt was the very first canine casualty way back in WWII during the Battle of Guam. He was one of 25 pooches that were buried at the United States Marine Corps War Dog Cemetery.

3. They Had Drill Teams

Doberman Drill Teams have been around since 1959. These groups highlight the breed’s agility and intelligence and have performed at a ton of sporting events and other large-scale gatherings.

Temperament & Intelligence of the Doberman Pinscher🧠

While notoriously feared as a rigid and refined beast for decades, the Doberman Pinscher can actually be a total sweetheart. If socialized correctly from a young age, these people-centric pups can be great babysitters for your tots and be a loyal, loving member of the family. However, your Dobie may be wary of new people.

Doberman Pinschers are highly intelligent dogs that thrive on mental stimulation. This makes them effortless to train. But keep in mind that a bored and restless Dobie will resort to unwanted behavior, such as excessive barking or chewing. This is why it’s critical to give them plenty of physical and mental exercise daily.

Doberman Pinschers make excellent family dogs, even in households with young children. However, obedience training and socialization from a young age are critical for these dogs.

They make wonderful family pets when they are fully integrated with everyone in the household. Sometimes, a Doberman Pinscher can develop a deep, obsessive bond with one member of the family. This can lead to aggressive and possessive tendencies and even separation anxiety when “his person” is gone.

If socialized properly from a puppy, your Dobie will get along with his other four-legged housemates, even the family cat.

Things to Know When Owning a Doberman Pinscher

Now that you know more about a Dobie’s personality, let’s take a look at other considerations before you take the plunge of purchasing one.

You should be feeding your Doberman up to three cups of dry dog food each day that is divided into two meals. The exact amount of kibble will depend heavily on your dog’s size, age, and activity level. Dividing his food up into two smaller-sized portions can help combat Gastric Dilation Volvulus (GDV), or bloat. This is a digestive issue that occurs a lot in deep-chested dogs and can be fatal.

Dobermans thrive on high-quality, grain-free, and high-protein dog food that is easy to digest. The very first ingredient that you should look for on the label should be beef, chicken, or lamb. This should be followed by healthy, hardy whole grains including sweet potatoes or brown rice. Avoid foods that have grain, fillers, or any animal byproducts in them.

Doberman Pinschers are livewire dogs that need about 90 minutes of activity every day. Due to their athleticism, your Dobie should be enjoying brisk runs or walk daily to stay in tip-top condition. During your walks, it is best to keep him leashed because Doberman Pinschers can become aggressive toward unknown dogs. This is why early socialization with humans and canines is essential.

Additionally, Doberman Pinschers love being given tasks to do. This will keep both his body and mind stimulated. Some ways to keep him entertained include:

One of the most critical components of owning a Dobie is properly training him. This unique breed performs best with positive reinforcement training. Since they are extremely in-tune with the emotions of their human companions, your Dobie will easily pick up on your feelings. This is why it’s essential to remain calm yet firm during the training process.

To motivate your Dobie, use tasty treats, plenty of praise, and avoid harsh corrections. Doberman Pinschers respond incredibly well to clicker training and visual cues as they naturally “study” their owner’s physical expressions and actions.

Keeping your Doberman Pinscher looking in peak condition is a breeze. You can brush him with a slicker brush once a week. These dogs moderately shed during the spring and summer months, so increase your grooming to a couple of times per week to remove dander and dead fur.

Trim his nails weekly and brush his teeth every few days to ensure good oral health and hygiene.

If you get your Doberman Pinscher from a high-quality breeder, he is a lot less likely to develop health issues. This is because the AKC maintains a very lofty health standard when it comes to breeders on their registration list. However, this breed can be susceptible to the following health conditions:

In order to keep your Dobie living his best life for his entire life, routine vet visits are paramount.

While male and female Dobies both make great family companions, there are some big differences between the two genders. Deciding whether to get a boy or a girl Doberman Pinscher pup is important when selecting the right dog for your household.

Male Doberman Pinschers are significantly larger than their female counterparts and can weigh up to 20 pounds more and stand up to four inches taller. Additionally, males are built with more muscle mass, making them much stronger than the ladies.

Female Dobies will mature quicker than males and are easier to train when they’re young. They are also more independent, demanding a lot less attention from their human family members. While gentler around young children, the female Doberman Pinscher can be a lot warier of new people and animals.

While both make excellent choices, female Doberman Pinschers are calmer, smaller, yet more shy with strangers than male Dobies are.

Loving yet intimidating, Doberman Pinschers are an amazing dog and cater to families wanting a friendly cuddle-bug to individuals seeking a canine bodyguard.

It’s critical to get your Doberman Pinscher from a reputable breeder in order to avoid behavioral and health problems. If trained and socialized early on, the Doberman Pinscher can be a great dog around people of all ages, as well as other pets.

Female Doberman Pinschers are more laid back and easier to train at a younger age than males. However, they do tend to be shy around strangers.

Overall, the Doberman Pinscher is an amazing dog that does well with active families who are willing to put forth the time and effort to allow him to thrive.