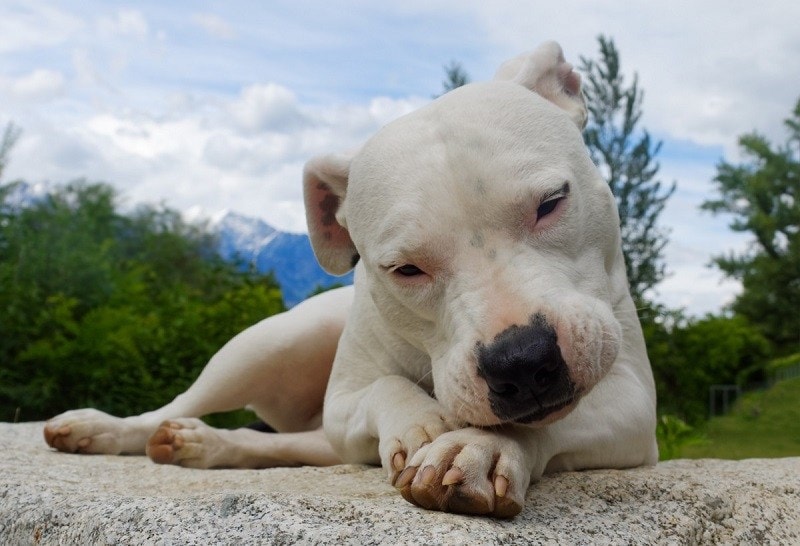 The Dogo Argentino plays the part his looks might suggest. He is a powerful dog with the goods to back up his message. This pooch is muscular and intelligent, which can make him a formidable enemy. However, he is also a sweetheart that will take care of his family and protect them from any threats. He is a canine that you want on your side.

He is an active dog, which is a reflection of his hunting history. The Dogo Argentino is well-accustomed to the chase. That also means that he has a high wanderlust potential to see the game to its conclusion. If you’re looking for a watchdog, this breed is an excellent choice. His bravery and loyalty will provide all the assurance that you need to know that you’re in good hands.

Dogo Argentino Puppies – Before You Buy…

Breeds like the Dogo Argentino have a smaller niche of suitable owners and situations. It’s imperative to know what makes this dog tick to make sure that you’re choosing the right breed for your family. While he is friendly with his family, he isn’t the best choice if you have kids. On the positive side, he is a low-maintenance pet on several fronts.

The Dogo Argentino is a larger breed. He’ll take up a lot of space and eat plenty of food. He lives life in the moment with strong intensity in all that he does. This pooch needs his exercise, given his hunting past. He’ll do best in a household with an owner willing to take charge at the get-go with early socialization and an active role in training.

You’d be hard-pressed to find a Dogo Argentino for less than $1,500. The rarity of the breed makes it a challenge to find one. It’s all about the law of supply and demand. We suggest getting a pup that is at least 8 weeks old but preferably 12 weeks old. You’ll find that the transition is much easier for the dog—and you—if he is weaned from Mom.

1. The Dogo Argentino Is the New Kid on the Block

Though its history goes back to the 1920s, the Dogo Argentino is a new dog on the purebred front. The AKC recognized the breed in 2020, making it 95th on its roster.

2. The Dogo Argentino Is a Designer Dog of Sorts

Selective breeding isn’t anything new. Breeders will often mate dogs that have desirable traits to get a cross that fits the bill. The same is true of the Dogo Argentino, only his purpose was a big game hunter, developed by Antonio Nores Martinez of Argentina.

3. Several Countries Have Banned the Dogo Argentino Because of His Unfortunate Past

The Dogo Argentino is a pit bull-like dog. He has that shameful history as a fighter. That past has followed him into today. As a result, several countries have banned this breed out of fear of his aggression, including Fiji, Australia, and the Cayman Islands.

Temperament & Intelligence of the Dogo Argentino

If you want a dog that is fiercely loyal to your family, look no further than the Dogo Argentino. This dog loves his tribe with an unwavering devotion if he perceives any threat to their safety. Consequently, he isn’t stranger-friendly and will reserve his judgment on new people coming to your home. The breed isn’t yippy. His muscular form is enough to get his message across to anyone who crosses him.

The Dogo Argentino is a dog that is better suited to a family that includes adults and grown children. They don’t have the patience or tolerance for younger children. While he doesn’t have a high tendency toward nipping, his jaw strength is impressive. His bite is worse than his bark. That said, this pooch loves his family and will show his affection readily.

Unfortunately, the Dogo Argentino is not a wise choice for households with other pets. He isn’t dog-friendly, especially given his lamentable past as a fighting animal. This dog also was a hunter, going after big game like pumas. He is one tough cookie. He also has a strong prey drive. If a cat or other dog runs from him, look out for a rumble.

Things to Know When Owning a Dogo Argentino:

Our description of the Dogo Argentino has undoubtedly raised a few red flags for you. The fact remains that the concern rests with the strength and jaw power that make him a dog for the right owner. That’s not the only part of having a pet. It’s essential to get the whole story so that you can decide if this pup is right for your home.

Like many large breeds, the Dogo Argentino is all about food. Luckily, he doesn’t become overweight usually, as long as he gets enough activity in his day. He will do best with three meals a day as a pup and two as an adult. Be sure to keep to a regular feeding schedule as opposed to free-feeding, especially during the first week or two in your home.

We recommend keeping treats for training. He isn’t prone to weight gain, but this breed needs some coaxing when it comes to training.

The history of the Dogo Argentino tells the story. This dog needs regular exercise to stay healthy, both mentally and physically. He craves the mental challenge of new things to do and places to see. He has led an active life in the past and thrives best in households where he can continue to get his daily fill. Walking him every day is an excellent way to tick off all the boxes.

The Dogo Argentino is smart. That was the purpose of his selective breeding. However, his strength and penchant for willfullness mean that you must take an active hand in training. Early socialization is also vital to curb some of his traits that run counter to his friendliness. We recommend introducing him to other people too so that he isn’t so stranger-wary.

If you want a dog that is relatively maintenance-free, then the Dogo Argentino is the pet for you. He doesn’t shed a lot. His short coat doesn’t need a lot of work. It also means that you won’t have a lot of problems with ear infections. An occasional rundown with grooming gloves will keep the Dogo Argentinos skin happy and promote good circulation.

The Dogo Argentino has few major health concerns. For good or bad, the breed is last on the list of popular ones of the American Kennel Club (AKC). It’s a positive thing because it means that overbreeding isn’t an issue. That’s one of the banes of being a dog that is highly desirable. Unreputable breeders will try to cash in on it.

For the most part, the sexes are similar in temperament. The difference lies in whether you get your pet neutered or spayed. An intact male, given his history, is likely to be more aggressive with other animals. We strongly urge you to take action if you don’t intend to breed your Dogo Argentino.

The Dogo Argentino is a handful on many scores. He’s a large dog that needs an owner willing to take an active role in training. He is strong, which makes early socialization imperative. That said, this breed is not a pet for the novice owner. You must have the confidence to deal with this pooch. To be clear, this pup isn’t a mean canine. He just needs someone that can handle his special needs.