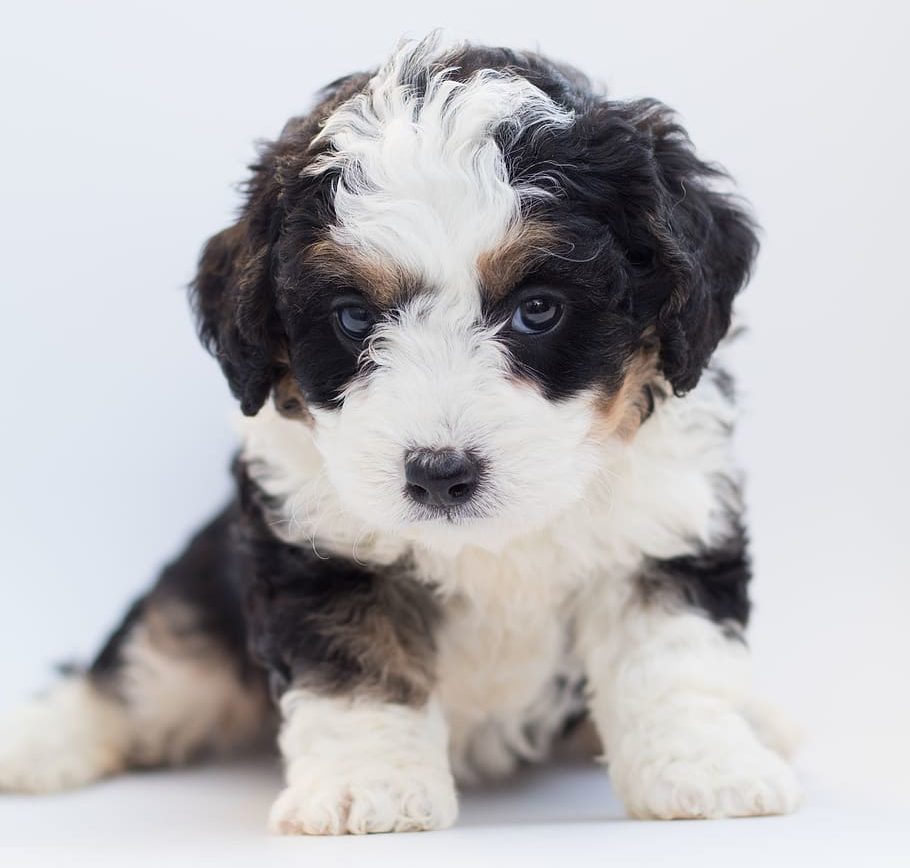 You may have seen these beautiful dogs around and wondered – what exactly is a Bernedoodle? These adorable pups are a hybrid – a Bernese Mountain Dog and a Poodle mix. They combine the good-natured, loyal traits of the Bernese Mountain Dog with the longer lifespan and hypoallergenic coat of the Poodle. The result? Gorgeous, friendly dogs with fewer health issues.

Bernedoodles are fantastic for active families, and since they come in both toy and standard sizes, you can find one that fits perfectly into your life, regardless of where you live. They’re not for everyone, though, as their high energy needs and superior intelligence can make them nightmares for owners who don’t train or exercise them properly.

If you’re considering adopting one of these fantastic dogs, the guide below will walk you through everything you need to know before taking the plunge.

Bernedoodle Puppies — Before You Welcome One Into Your Family..

You might have been sold as soon as you heard that a cross between the beautiful, goofy Bernese Mountain Dog and super-smart Poodle existed. Don’t rush into this buying decision, however, as these dogs aren’t right for everybody.

They don’t adapt to hot weather that well, thanks to their thick, curly coats. Also, they have high energy demands, so if you’re not prepared to train and exercise your dog regularly, you might find that you’ve adopted the world’s most adorable domestic terrorist.

We’re not trying to scare you away, as we genuinely love these dogs. We just feel that it’s important for owners to understand what they’re getting into before it’s too late to turn back.

The first “official” Bernedoodle was bred by Sherry Rupke of Swissridge Kennels in 2003; we say “official” because it’s possible that “accidental” crossbreeding occasionally happened before that date.

Since then, a few more reputable Bernedoodle breeders have cropped up, but this is still a new — and therefore, rare — breed.

2. How much they shed depends on the curliness of their coat

Coat styles can vary wildly depending on the individual dog, but for the most part, each Bernedoodle has at least a little bit of waviness in their coat. Beyond just affecting how the dog looks, the amount of waviness can reveal how much they’ll shed too.

As a general rule, the straighter the coat, the more they’ll shed. However, even the straightest-coated Bernedoodle will shed less than many other breeds, but if you’re worried about allergies, you should opt for the curliest little pup you can find.

Like Poodles, you can get Bernedoodles in standard or tiny sizes, but Bernedoodles have a third option that’s in-between: “mini.” That’s why their height and weight ranges were so vast, as these dogs can be huge, tiny, or even tinier, depending on their genetics.

Their personalities are similar regardless of their size, but you should be sure that you have enough room to accommodate the larger versions. They definitely need a yard to run around in, whereas the toy Bernedoodles can do fine in an apartment.

Bernese Mountain Dogs are typically fairly intelligent, but their brains pale in comparison to the Poodle, which is among the smartest dog breeds. As a result, Bernedoodles are smart, but they’re not super-geniuses like other Poodle crossbreeds, such as the Aussiedoodle.

They tend to be loyal and affectionate to their families, although they can be suspicious of strangers. That means you need to take extra care to socialize your Bernedoodle and teach it proper manners, especially if it’s on the larger side. While these dogs don’t typically show aggression, you don’t want to allow problems to fester.

One area in which their intelligence becomes a problem is their stubborn nature. These dogs absolutely require a confident, steady trainer to ensure that they don’t develop bad habits, and they can run roughshod over anyone who isn’t firm and consistent during training.

Bernedoodles are great family dogs, and they get along especially well with children. You may need to be careful about bringing a standard-sized Bernedoodle into a home with small children or elderly people, as they may knock them over accidentally, but you shouldn’t have issues with aggression.

That being said, if your family likes to entertain, you’ll have to be extra conscious of socializing your Bernedoodle, as they’re usually not huge fans of allowing strangers around their families.

However, large families do well with these dogs, as they require nearly constant attention. In fact, a Bernedoodle’s need for love and validation may prove overwhelming for a single owner.

Bernedoodles are typically fine with other animals, but again, you should socialize them from an early age just to be sure. These dogs love to play, and they’re not typically picky about who their playmate happens to be.

Things to Know When Owning a Bernedoodle

If you’re going to drop several grand on a dog, you should do your research first. Here are a few things we think you should know about these pups before you bring one home:

How much food your Bernedoodle needs will depend in large part on how big they are; naturally, the larger dogs can put away more kibble than the smaller ones.

Regardless of the dog’s size, though, you need to be careful not to overfeed these dogs, as they can be prone to obesity. You should also be aware that their keen intelligence makes them absolutely aware of how adorable they are — and how best to exploit that cuteness in order to get treats.

We believe in feeding these dogs a high-protein diet and picking up their bowls when they’re finished — no free-feeding allowed. No matter how much you feed them, however, you’ll need to make sure they get plenty of exercise.

These dogs need quite a bit of exercise: at least an hour of moderate activity a day.

Fortunately, it’s not hard to convince them to run around, as they absolutely love to play. You can quickly burn off any excess energy with a pull rope, fetch toy, or even just a spirited game of tag in the backyard.

These dogs do best when they’re stimulated both mentally and physically, so puzzle toys, agility training, and regular training are all good ideas. At a bare minimum, you’ll need to take your Bernedoodle out for a long walk every way.

As mentioned above, training is essential, especially for standard-sized dogs. The big pups can do a great deal of damage if not properly trained and socialized, so be sure to get on that as soon as you can.

Bernedoodles are often wary of strangers, which makes them decent guard dogs but can cause issues when introducing them to new people. Again, socialization — both early and often — is key.

These dogs are extremely stubborn, so training might get frustrating at times, but resist the urge to punish them for misbehaving. They do best with positive reinforcement and are likely to just dig their heels in if they feel they’re being treated unfairly.

The good news is that they often grow out of their stubbornness to a certain extent as they mature. However, if you’re not careful, that could allow plenty of time for their bad behaviors to become set in stone.

These dogs are fairly hypoallergenic, so there shouldn’t be much of a problem with shedding or dander. However, as we mentioned earlier, individuals with straighter coats will shed more than those with curls, so factor that into your decision when adopting one.

The curly-haired dogs aren’t walks in the park when it comes to grooming, though. They’ll need their curls brushed out regularly to prevent matting, and you’ll want to clip their fur every few months or so. You shouldn’t need to bathe them more than every three or four months unless they’re visibly filthy.

These pooches do have floppy ears, which means you’ll need to pay special attention to keeping them clean. Wiping them out with a damp cloth every week should do the trick as far as maintenance goes.

Part of the reason for the existence of the Bernedoodle is the fact that one of their forebears, the Bernese Mountain Dog, is riddled with health conditions. In fact, inbreeding has become so rampant in that breed that they’re extremely at risk for cancer, and their lifespan has been slowly dwindling for years.

Bernedoodles live much longer than Bernese Mountain Dogs, thanks largely to the healthy influence of the Poodle genes. However, their lives aren’t necessarily all rainbows and sunshine, as these crossbreeds are still prone to a host of health issues.

Their general health seems to depend on what generation of breeding they come from. Some dogs, known as F1 puppies, are a 50/50 mix of Poodle and Bernese Mountain Dog; these also tend to be the healthiest. Other lines have an unequal mix of each breed, though, and these are more prone to have any health issues common to the dominant breed.

However, you should remember that these dogs have only been around since 2003, so we have a limited amount of data to look at when drawing conclusions about the breed as a whole. A reputable breeder should be able to help give you an idea of what to expect from your pup, especially if their opinion is used in conjunction with a genetic screening.

As we’ve shown, there are quite a few differences to be found within the breed in terms of size, health, and coat, so you’d be forgiven for assuming that there must be huge differences between males and females as well.

That’s not really the case, though, as the two sexes are fairly similar. There are differences to be sure, but they’re not as pronounced as in other breeds.

Typically, the males are larger and usually more affectionate. This is counterbalanced by a strong stubborn streak, however, so you might want to pick out a girl if you’re not confident in your training abilities.

The ladies aren’t as starved for affection (this is relative, of course, as they’re still needy dogs). They’re generally more easygoing, though, and less likely to fight you for control of a training session.

If you’re looking for a beautiful, intelligent, hypoallergenic dog, then the Bernedoodle might be just what the veterinarian ordered. While they’re a relatively young breed, these animals make loving and loyal pets, and they’re perfect for families. Since they come in three sizes, you can easily find the ideal dog for your living situation.

They do tend to be stubborn and headstrong, though, so be prepared to spend the time training yours. Also, while they don’t shed much, you will need to spend a fair amount of time brushing and managing their curly locks.

The Bernedoodle isn’t suitable for everyone, but if you can keep up with an active, mischievous dog, you’ll find these can be the perfect companions for you and your entire family.