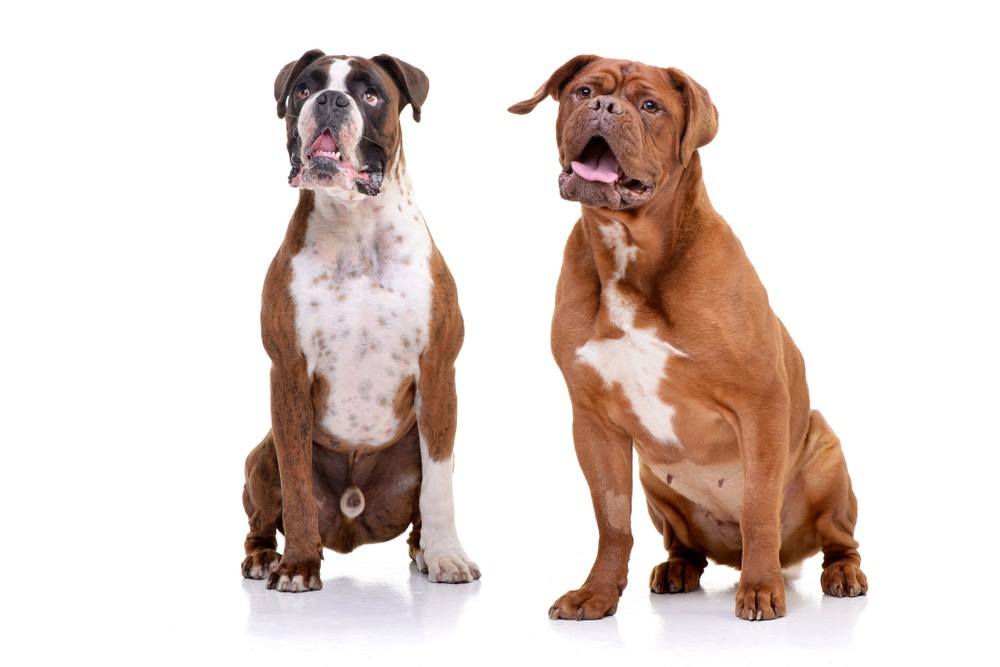 They weigh an average of 90 pounds but interestingly, have a soft heart. Many people use these dogs as guard dogs for an estate or their family. They appreciate having a job to do, and without enough occupation, they become destructive. Make sure you are ready to take on the challenges of adopting an enormous, energetic dog before investing in one.

Dogue de Boxer Puppies — Before You Get One…

1. The Boxer has a history of bull baiting.

The Boxer makes up one half of this rare mixture. When you think of both of the dogs, they come across as a “manly man’s” sort of dog. They are thick with muscle and have alert eyes. They miss nothing and are ready for everything.

Much of this character has been trained into the dogs. They were initially developed in Germany in the 1800s for use as a guard dog, a dogfighter, and most notably, a bull baiter. Many believe that they came from the Tibetan Mastiff, who were fighting dogs themselves.

They lost popularity after being involved with the Germans during World War I. Just as many countries use them in their police forces today, Germany used them in their military. However, after the war, their reputation grew unabated and continued actively even throughout the Second World War.

The Boxer received their name from the way they jump onto their hind legs and use their front paws while fighting. People thought that it appeared as though they were “boxing” their opponent.

2. The Dogue de Bordeaux has a mysterious past.

The Dogue de Bordeaux came about in the middle ages in France. There is not much that has been entirely verified about these dogs and their past. They have pushed through, and their bloodline survived through many different wars, kingdoms, and conquerings.

Some speculate that their heritage lays as far back as the Roman times. An infamous dog breed at the time was the Molossus breed. They are a giant dog breed that has also survived to modern times, although theoretically, have much changed. They influenced the lineage of many different types of dogs, all of whom retain their muscular appearance and intimidating approach.

3. Giant dog breeds are often the most sensitive kind of dog.

Whatever people say about these dogs, one thing is sure: Giant dog breeds are some of the most sensitive strains recorded.

Frequently, small dogs suffer from small dog syndrome, making them aggressive and vocal. Giant dog breeds have nothing to be afraid of, though. They have no sense of being in real danger because everything else tends to be smaller, weaker, or slower than they are.

This means that they have big, sensitive hearts. Although many of them are not keen on strangers, they want consistent affection from their families. They often love to cuddle and always want to be close.

The fact that they are such a big and intimidating dog does not mean that they are dangerous, not to the people they know. The Dogue de Boxer is fierce-looking, but they are family-oriented and always prefer to be around their people. They have exceptionally loving personalities and like to be as close to their favorites as they can.

These dogs are brave and are ultimate protectors. They are often used as capable guard dogs for this reason. They don’t tend to have the natural desire to be aggressive, but it can be part of their training to listen to such commands.

The parental dogs of the Dogue de Boxer are both intelligent and continuously alert. Although they can sometimes express stubbornness, they pick up new commands quickly. Part of their care needs to be mental stimulation, so they do not become bored and destructive.

These dogs usually do well in families. They love to be around people whom they know they can trust. They are protectors, so if a child needs a bodyguard, they won’t leave their side. They are loving and non-aggressive to their family. Be careful when having them around little children because they might not always recognize their size.

The Dogue de Boxer needs to be socialized early on to ensure their agreement with other pets. They are not anti-social, but since they have such a high tendency to be protective, they can be territorial. Specific training may be required to ensure that your dog knows how to behave appropriately around other animals.

Things to Know When Owning a Dogue de Boxer

The Dogue de Boxer has one of the highest diet requirements of any hybrid dog. On average, they need to consume around 4 cups of food a day. This amount should satisfy their bulk, keep them muscular, and provide sustenance for their active days.

When looking for a food brand to feed your Dogue de Boxer, don’t let the large quantity give you an excuse to buy low-quality food. It is akin to feeding them empty calories, something they can do nothing with after digestion. Instead, provide them with food that is high in protein. It gives them the nutrients they need to build muscle mass and fuels them on days of necessary activity.

Exercise is vital when you own one of these pups. They can do a great deal of damage if they do not get enough. Make sure to get them out for intense activity for at least 60 minutes or 120 minutes of low to moderate exercise each day.

If you like to walk or run with your dog, aim to go at least 12 miles each week. This should satisfy their daily exercise requirement if it’s spread out throughout the week. Giving them space to run around is essential.

They are not the best dogs to consider if you live in an apartment. The combination of little space and an active mind quickly leads to boredom and destructiveness.

Training is not often a challenging endeavor with a Dogue de Boxer. They want to be mentally engaged and enjoy the feeling of pleasing their trainer. Make sure to give them plenty of positive feedback, so they know that they have done so.

You can train these dogs to make excellent watchdogs or guard dogs. If you are not sure how to accomplish this but would like to use them for this purpose, get a trainer specialized in the behavior. You don’t want your dog to think that they should react to someone who is harmless because of inadequate training.

Do not ever use physical discipline while training your Dogue de Boxer. They don’t react well to it and will either cease listening and respecting you or may act out to protect themselves. You don’t want this breed to develop aggressive tendencies.

The Dogue de Boxer is high maintenance when you consider their daily activity needs. However, when it comes to grooming, there is little management required. They have a thin coat that grows short and close to their body. They do not shed much. Brush them a couple of times a week to keep their coat healthy and for bonding time.

Brush your dog’s teeth at least a couple of times a week to avoid dental issues. They can have somewhat floppy ears, so make sure to clean them out and dry them, so they don’t suffer from an ear infection.

These dogs should get enough exercise that they won’t need their nails trimmed often. However, check them at least once a month, since nails that grow too long can end up causing your dog pain.

Due to their large size and the health issues commonly suffered by the parents, these dogs have a predisposition to heart diseases. Make sure to take them for a vet checkup once or twice a year. Many of these diseases are severe and should be caught as early as possible. Since they are a hybrid, they have developed a certain amount of hybrid vigor.

There are no recognizable differences between males and females in this dog breed because it was only recently developed.

Anyone can look into the eyes of a Dogue de Boxer and see a vigilant and intelligent dog. They are dogs that want to follow commands and be assured that what they are doing is exactly what their trainer desired.

This giant dog breed is loving and friendly with their family. They like to be around their people but don’t often struggle with time alone as long as they get enough exercise.

With the Dogue de Boxer, you get a guard dog, a watchdog, a protector, a friend, and a cuddle buddy wrapped into one furry package. Who wouldn’t want such a dog?

20 Most Hyper Dog Breeds (with Pictures)