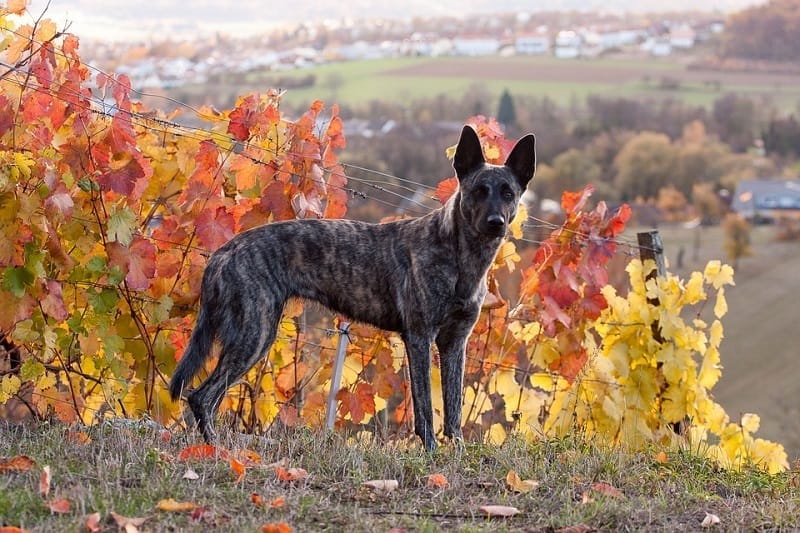 A true jack-of-all-trades, the Dutch Shepherd is one of the purebred dog world’s most hardworking and adaptable breeds. Bred for generations by shepherds and farmers to adapt to a meager and harsh existence, they’re a true model of canine resilience. Able to accommodate themselves to almost any living situation, climate, or job, these dogs are real canine superheroes!

The indefatigable Dutch Shepherd has been described as a workaholic, and for good reason: Through many generations of intensive breeding, today’s Dutch Shepherds are at their happiest when they have a job to do. Given proper socializing and training, there’s nothing that the Dutch can’t do – from being a family dog, to an apartment dog, to training as a service or disability aid animal.

Are you curious to learn more about this little-known Shepherd breed? Then read on to learn everything you’ll need to know about welcoming one into your life.

Dutch Shepherd Puppies – Before You Get One

Bringing any breed of dog into your life is a big commitment, and the Dutch Shepherd is no exception. While they’re content to deal with any sort of living situation, knowing more about their history and origins will help prepare you to give them the best possible life.

Whereas the Belgian and German Shepherds that we know today have increasingly been bred for qualities that make them more suitable for home life, the venerable Dutch Shepherd has changed very little since its inception as a breed in the early 1900s. This gives it a much stronger work ethic than comparable breeds, but also greater independence and stubbornness that make it better for experienced owners than first-timers.

Hailing from the Netherlands, this breed was originally developed as a herding dog for the European countryside. Responsible for keeping sheep away from crops in the fields, it would then accompany the livestock to the market as well. In the farmyard, they were also responsible for pulling carts and alerting farmers of strangers entering onto the property.

When sheep farming began to disappear in the Netherlands, farmers took more notice of the Dutch Shepherd’s versatile skillset and hardworking nature in different capacities. Making the jump from farmhands to city dogs, they quickly became the pooch of choice for police work, tracking dogs, and guide dogs for the blind and elderly.

World War II nearly put a stop to the breed entirely, when many dogs suffered for a lack of food and safe living conditions. From the stock that was left, a variety of other Belgian breeds were mixed in so as to increase the hardiness and health of the Shepherd without sacrificing its hardworking qualities.

Today, the Dutch Shepherd is remarkable for its continuation of this hard-driving herding tradition. Loyal, reliable, and independent, they are prime candidates for extensive obedience and discipline training. Given the appropriate chance, they can learn to deal independently with jobs assigned to them by their owners, maintaining a laser-like focus until the task is completed.

For active owners and families with plenty of time and space for activities, the Dutch Shepherd can easily become a staple of the household. Their willingness to go the extra mile to please their owners is a truly endearing quality, and their unfailing dedication to protecting their families makes them more than capable of being a watchdog or even a guard dog.

First trained by the Royal Dutch Police Dog Association in the early 1900s, law enforcement officers in the Netherlands prize this breed of dog for its single-minded focus and ability to work independently when given a task. This means that they have been members of law enforcement in Europe for over 100 years!

3. The Dutch Shepherd Is Not Yet Recognized by the AKC

Though widely commended and recognized in European kennel clubs, the main governing body for dog shows in America, the American Kennel Club, has not yet fully vetted the Dutch Shepherd. It’s currently in the “Foundation Stock Service”, a multi-year program designed to assess and determine the breed’s eligibility for future AKC awards and recognition.

Temperament & Intelligence of the Dutch Shepherd 🧠

Among all the Shepherd breeds, the Dutch Shepherd may well be the most intelligent thanks to its continuation of older, task-oriented genetics. They’re incredibly smart, and both pick up on new training quickly and retain it almost indefinitely. Their independent natures and acute focus can make training a challenge for newcomers, but experienced dog owners will likely be amazed at their capabilities.

Alongside these hardworking and focused tendencies, the Dutch Shepherd is also especially devoted and affectionate towards its owners. They have been known to alert owners to intruders even without training and will fiercely protect anyone that they consider part of their pack. Given appropriate exercise and plenty of stimulation, the Dutch Shepherd can occasionally let its guard down and cuddle with you, but this is more of a rarity than a regular occurrence.

The Dutch Shepherd is a fantastic dog for families, though its herding instincts may get it into trouble around small children. With just a small amount of obedience training, however, they can quickly learn to leave children alone except in emergencies. For any family with older children, a Dutch Shepherd can act equally as companion and protector and will gladly accompany children and adults alike wherever they go.

Given their long history as a herding dog, Dutch Shepherds tend to do better on their own than with other dogs. Small animals like cats and rabbits are a definite no-go, as the Shepherd will herd and harry them to no end. Even with extensive training, it’s unlikely that a Dutch will completely abandon its instincts to herd smaller animals.

Things to Know When Owning a Dutch Shepherd:

Does the ever-loyal, intelligent, and hardworking temperament of a Dutch Shepherd sound like it might be a perfect fit for your family? If so, you’ll want to consider a few basic care requirements for the breed before looking to buy or adopt.

Depending on their size, weight, and activity levels, Dutch Shepherds will require anywhere from two to three cups of high-quality dry dog food per day. We recommend choosing a food formulated specifically for active breeds, as even the laziest of Dutch Shepherds is still a hardworking canine. To prevent overeating and indigestion, split this daily food into three equal portions given at regular times of the day.

Dutch Shepherds have exceptionally high exercise requirements, both physical and mental. Their incredible stamina and unbreakable focus make some sort of agility or sports training almost a necessity. This way, they can combine both mental and physical stimulation into one activity – saving you time and energy as they complete increasingly difficult tasks.

Aim for a minimum of one hour a day of moderate to intense physical activity and increase this as much as you’re able to. If a Dutch Shepherd isn’t sufficiently exercised, they can occasionally turn towards making up their own jobs, such as shredding pillow cushions.

Both remarkable for their ability to be trained and the eagerness with which they’ll pursue goals, Dutch Shepherds are a natural choice for anyone who wants to train a dog for jobs, sports, or protection. Experienced owners will find them a joy to train, but first-time trainers may encounter the dog’s willful spirit in stubbornly disobedient ways. Experienced or not, it’s worth considering hiring the help of a professional dog trainer to set a foundation of obedience training to build on later in your Dutch Shepherd’s life.

The Dutch Shepherd comes in three main coat varieties: short-haired, long-haired, and wire-haired. All three tend to shed very little, but daily or weekly brushings will help keep mats out and maintain the proper luster of their coats. Combine this with regular nail clippings and tooth brushings as well as the occasional bath, and the Dutch Shepherd will stay happy and healthy throughout its lifetime.

While being remarkably healthy for a purebred dog, the Dutch Shepherd is nevertheless prone to a few congenital health conditions. These can include:

Female Dutch Shepherds are generally observed to have smaller frames than their male counterparts and will usually weigh less to accompany this. Other than that, owners of this breed have noticed very little difference between male and female dogs. The hardworking nature and keen intelligence of this breed are equally on display in both sexes.

The Dutch Shepherd is a truly remarkable dog breed that has stood the test of time, even through a war that nearly extinguished the breed. Whip-smart and especially eager to work and please their owners, these amazingly resilient dogs are sure to be long-lived companions to anyone who will take the time and effort to care for them.

Consider adopting one if you’re looking for a dog that works as hard as you do and have the patience and willingness to properly train and exercise them throughout the course of their lives. You’ll be rewarded with an incredibly loyal friend that will stay by your side until the very end.

Dog Breeds With Green Eyes: How Rare Is It?