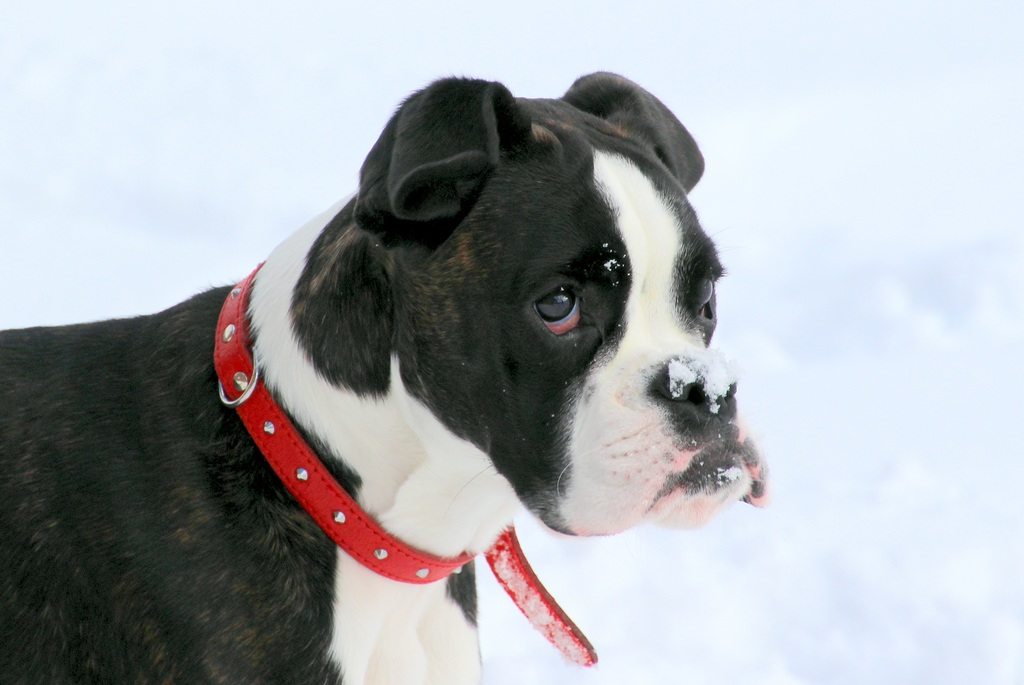 The English Boston-Bulldog is a hybrid cross between the English Bulldog and the Boston Terrier. They are a medium-sized dog with a giant heart. They are happy dogs without long-lasting energy reserves that necessitate higher maintenance.

These pups are smart and sensitive to their people’s emotions. They quickly pick up on social cues and do their best to make sure that everyone is okay. They are athletically built, with a thicker, muscular body. When they are in their prime, they have a playful and more energetic nature and enjoy any playtime you can give them.

They are social dogs and do not do well when they are left alone for long. This trait makes them an excellent companion dog, but not great for people with a busy lifestyle.

English Boston-Bulldog Puppies — Before You Buy…

These pups can be quite expensive because they are a blend of two well-loved breeds. The price of the parents factors heavily when considering the cost of their puppies is.

Well-bred English Bulldogs land in the price range between $1,500 to $4,000, depending on their breeders and pedigrees. The health and genetics of the parent pups also play a big part in the price of this breed, since they are known to suffer from a wide variety of diseases that shortens their lifespan.

Boston Terriers are typically much less expensive than an English Bulldog. Their cost ends up between $600 to $2,000, depending on their pedigree and the breeder.

Both of these dogs are popular pups and have been around for quite some time. If you are looking into investing in either one of the breeds, try checking out your local shelters to see if you can adopt one. They are generally much cheaper, and it is always a bonus to give a pup home.

The blend of the Boston Terrier with the English Bulldog is not as popular and harder to find in a shelter. If you are looking at investing in this hybrid mix, expect to pay a pretty penny. From a breeder, these dogs are generally between $1,500 to $4,000.

Make sure when you are purchasing a Boston-Bulldog from a breeder that you check out the health of the parent pups. Ask to see veterinary reports and evidence of health checks. No reputable breeder will refuse this, especially with an English Bulldog being part of the mix.

1. Any English Bulldog mix is going to be gassy.

The anatomy of the English Bulldog is to blame for this, unfortunately, although their diet can play a role as well. Bulldogs fart excessively because they tend to have highly sensitive stomachs. Their digestive system does not digest food well and causes consistently upset stomachs.

Even though you wouldn’t think it was connected, their skull shape also plays heavily in their digestion problem. Instead of having a longer muzzle, they have flatter faces that make it difficult for them to eat at a consistent pace. They tend to eat quickly and improperly, taking in far too much air at the same time as their food.

Diet factors into their farty behavior as well. If they eat too many carbohydrates, they don’t break down the sugar and starch properly, and the food ends up fermenting in their intestines. Since they are generally not highly active dogs, they don’t need as many carbs as other breeds. Find food that doesn’t have a large amount of carbs or grains.

Avoid giving your Bulldog or Bulldog mix any leftovers or table scraps because they won’t digest them quickly, and you will smell the regret later.

2. All the muscle hides a sensitive soul.

English Boston-Bulldogs have a leaner build than English Bulldogs but are thicker than the wiry Boston Terriers. They are a pup of averages between the two parent breeds in their build, energy levels, and health. Even though they are agile, they still have a more muscular build than other dogs that share a similar height.

Even with the muscles, English Boston-Bulldogs have sensitive souls. The tender-hearted dogs are alert to the emotions running in the air around them and should be treated with patience. Being left alone for extended amounts of time leads to sadness and sometimes even depression.

Although these dogs can have a stubborn streak, remember their sensitivity during training. You will get the best response out of them with a firm hand coupled with patience and kindness.

3. Even with a mutually bloody past, the blend of these two dogs makes for a mellow companion.

Both the English Bulldog and the Boston Terrier have rather gruesome histories. Unlike breeds like the Pit Bull or Rottweiler, however, they have lost most of the aggressive reputation that typically comes with a bloody past. Most of this is because of their sweet dispositions.

The Boston Terrier is one of the few breeds developed in America. They came from breeds that were pit fighter dogs originating in Boston, Massachusetts. These dogs were made to be small but fierce. In the late 1800s, the wealthy began to have some of these dogs interbred to create the Boston Terrier, although the Terrier part is not through any relation to the family.

English Bulldogs were bred from these dogs to be smaller yet still muscular. Instead of being related by name to Mastiffs, they received the name “Bulldog” because they were used in bullfighting and would come from underneath to attack the bull.

Since then, however, both of the breeds have become beloved companion dogs with mellow, happy personalities.

Temperament & Intelligence of the English Boston-Bulldog

One of the best traits in the Boston-Bulldog is their adaptability. They take everything in stride, and as long as they are with their beloved owners, they are happy to be taken around or live in a wide variety of different living situations.

The Boston-Bulldog’s energy level as a puppy can be relatively high, as it is with most dogs when they are puppies. However, as they start to age, they quickly begin to mellow out and calm down. They always retain their curious nature and goofy personality, though. This makes them an excellent, lower maintenance dog breed.

Some people say that Boston-Bulldogs make good watchdogs because of their alertness. However, they will need a good deal of training because they are friendly and enjoy being around people, strangers or no. They can also be rather lazy dogs that simply don’t care when new things happen.

These dogs are excellent family pets. They are patient and sweet, making them excellent dogs for families with kids. They have a heavier build that makes it harder for them to be inappropriately handled by kids, keeping them a safer dog for kids.

Moderate-sized families that consistently have people around the home are suitable for these pups because they don’t like to be left alone.

Early socialization is essential for any breed. However, most people will be pleased to know that Boston-Bulldogs typically gets along well with other animals. They don’t tend to be highly territorial.

Get them used to other animals, and brush up on their social skills by having them around new people and taking them out to dog parks.

Things to Know When Owning an English Boston-Bulldog

English Boston-Bulldogs do not eat much food every day because of their small-medium size, and they typically exhibit lower levels of activity. They only eat around 1-2 cups of kibble each day.

The most important part of your pup’s diet is going to be finding food that is easier for them to digest. Finding the best food for them will mean fewer problems with consistent flatulence. Who wouldn’t want that?

To correlate with their low daily food consumption, English Boston-Bulldogs don’t require much physical activity every day. Walking them, playing with them, or taking them to a dog park for about an hour a day is enough for them to stay fit.

If you consistently go out for walks, try to average about 5-7 miles each week. If they don’t want to be active, they can be stubborn about not moving. Don’t give in to this too often, though, since this will impact their fitness and flexibility and lead to health problems later.

A post shared by Hamlet of Mill Valley, Ca (@hamletdabulldog)

English Boston-Bulldogs are intelligent dogs with a deep desire to please their masters. It is important to be firm with the pups because they can be stubbornly inactive, but they also don’t respond well to any negative feedback. Keep up a positive attitude for them to happily continue trying.

Another crucial part of their training involves sticking to consistent rules and a routine. The reason for this is because Boston-Bulldogs like praise, affirmation, and knowing that they are doing the right thing. Consistency satisfies them that they are indeed a “good dog.”

Even with short hair, these dogs tend to shed. Brushing them out weekly is recommended. The folds on their skin need to be kept dry and clean so they don’t develop rashes or other skin issues.

Keep your Boston-Bulldog’s ears clean, especially if they are folded. Doing this once or twice a week with a soft towel helps avoid ear infections, especially in hot or humid environments.

One essential aspect to consider with these pups is their intolerance of the heat. They are not able to regulate their temperature well in hot environments. Protect them and limit their time outdoors during summers to keep them from suffering heatstroke.

A well-rounded, happy-go-lucky dog, the English Boston-Bulldog has a comical appearance and a goofy personality that makes them great family dogs. The pups are quite intelligent and can be quick to train, especially when coupled with patience and consistent command patterns.

If you adopt a new puppy, don’t be worried about their increased energy levels. As they age, they make lovely, mellow companion dogs for families, singles, or seniors.