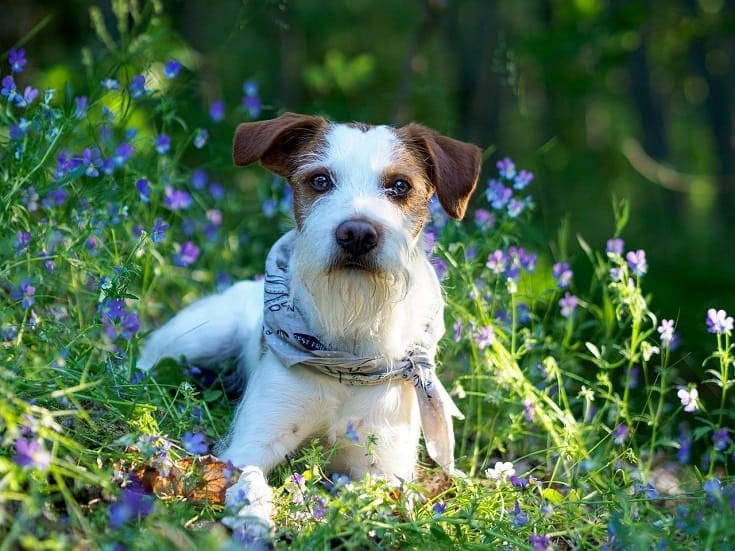 The story of the Kromfohrlander is enough to pique your interest in this cute little pooch from Germany. He looks like a terrier mix without the wanderlust potential and strong prey drive typical of this group of dogs. Instead, he is strictly a companion dog that is affectionate and very easygoing, despite his ancestry. He is a definite homebody and will stay close to home.

The legacy of the Kromfohrlander begins in the 1940s in wartime Germany. Original Peter, as he was known, was a companion for US soldiers in the field. He was a mixed breed that endeared himself to the troops. After he went missing, a local woman named Ilse Shleifenbaum rescued him. The rest, as they say, is history. She went on to breed Peter and create what has become the Kromfohrlander standard.

While he may appear aloof and serious, the Kromfohrlander is something of a clown. He’ll entertain himself—and your family—with his playing. That’s part of what makes him such a lovable pet. It also helps explain why there are so few pups in the United States. The Europeans know that they have a special dog in their midst.

Kromfohrlander Puppies – Before You Welcome One Into Your Family..

The Kromfohrlander prefers a routine that doesn’t change. While he is affectionate with his family, this pooch tends to pick a favorite in the household to whom he is fiercely devoted. Separate anxiety is a common issue with this breed. He is also a sensitive dog that won’t respond well to harsh words. However, he is intelligent and keen to please.

This pup has the energy level you’d expect from a dog that has a terrier background. He is also very expressive. It’s easy to figure out what’s going on in his mind. If not, he’ll tell you, since this pooch is sometimes vocal when he doesn’t get his way. The Kromfohrlander is a playful pup that will enjoy games of fetch and tug-of-war.

1. The Name of the Kromfohrlander Is a Reference to His Native Germany.

The champion of the breed, Ilse Shleifenbaum, named this pooch for the landscape from which he came. Krom fohr in German means crooked furrow.

2. The push to breed Kromfohrlander in the United States started up again in 2012.

The Kromfohrlanders first came to America in 1998. The breeding program didn’t take off until a couple more pups came to the country in 2012.

3. The Kromfohrlander earned his Foundation Stock Service status in 2012.

The Kromfohrlander is one of 81 breeds on the path to AKC recognition. From there, he’ll move onto the organization’s the Miscellaneous class after there are 150 dogs in three generations.

Temperament & Intelligence of the Kromfohrlander 🧠

The Kromfohrlander is an intelligent pup that you’ll find is agreeable and laid-back as a family pet. The essential thing is to keep him occupied so that he won’t form bad habits like digging or barking. He’s not a pet to keep alone in the backyard without getting some attention. However, he usually doesn’t nip, so you’re good on that score.

The Kromfohrlander makes an excellent family pet with many desirable qualities that you’ll appreciate. He is kid-friendly and will readily keep up with them. He tends to bond more closely with one person in the household, but he isn’t aggressive with others. On the other hand, this pooch is reserved when it comes to new people. Therefore, early socialization is a must.

The Kromfohrlander does best in single-pet homes. He isn’t overly friendly with other dogs. A better description would be to say that he’s reserved in any new encounter. Unfortunately, you shouldn’t take this pup to the doggie park, even if you have introduced him to other pets as a puppy. He might get possessive of his owner with other pets around him.

Breeders have selectively bred the Kromfohrlander to reduce his prey drive. However, he still has a bit of terrier in him and may chase the family cat. The same precaution applies to other small animals in your household, such as guinea pigs or rabbits.

Things to Know When Owning a Kromfohrlander:

The Kromfohrlander is relatively care-free when it comes to the basics. As long as you start training and socialization early, you’ll find that he’s a welcome addition to your family. Many aspects of owning a dog like this one are true of any breed. The essential thing is to build a trusting relationship starting the day you bring him home.

You should feed your Kromfohrlander a dog food formulated for medium-sized dogs. This breed matures relatively quickly when compared to a larger dog, such as a Golden Retriever. He will reach adulthood by 12 months. Then, you can switch him to the adult diet. As a puppy, plan on giving him two to three small meals spaced throughout the day. That will help keep his blood sugar levels stable.

You should also limit treats to 10% of your pup’s daily intake. We suggest using them as a training aid. They make a powerful motivator to get your pooch to obey. The Kromfohrlander has a moderate tendency to gain weight. Keep an eye on his body condition and adjust the amounts accordingly. Remember that obesity is easier to prevent than treat.

The Kromfohrlander is fairly active. However, we suggest taking him on daily walks for mental stimulation to keep this smart pooch happy. It’s also an excellent way to bond with your pet. If your pup is less reserved, you can also use it as an opportunity to reinforce his socializing skills and leash manners.

The key to training your Kromfohrlander is consistency. Remember that this pooch likes routines. Also, positive reinforcement will work better than stern reprimands for this sensitive pup. He is easy to train, especially if his favorite companion takes the lead in teaching him. He’ll pick up new tricks and commands quickly.

There are two variants of the coat of a Kromfohrlander: either rough-haired with a beard or smooth-haired without one. Both shed frequently. You brush him at least once to three times a week to keep it under control. You should also check his ears periodically and pluck any excess hair so that air can circulate and help prevent infections.

We suggest starting him early with tasks such as nail trimming. Handle his paws occasionally so that he gets used to it as a puppy. You’ll find that it’s infinitely easier to do if you make it a habit. It’s another appropriate time to give him a treat.

The Kromfohrlander is a relatively healthy dog, thanks in part to his rarity. Nevertheless, there are some issues that he shares in common with other breeds of his size. A reputable breeder will conduct testing for the more prevalent ones.

You’ll find that you have a delightful pet no matter which sex of dog you get. Both are just as affectionate and loyal. We recommend that you have your pet neutered or spayed when it is appropriate, based on your veterinarian’s advice. Breeding is a decision that you shouldn’t take lightly.

While the Kromfohrlander is a relatively unknown breed outside of Europe, he is a pup worth seeking out if you’re looking for a steadfast companion that will give you few troubles. Granted that he isn’t a pooch for every household. However, in the right home, he will reward you and your family with a dog that will make you laugh and keep you entertained with his antics.