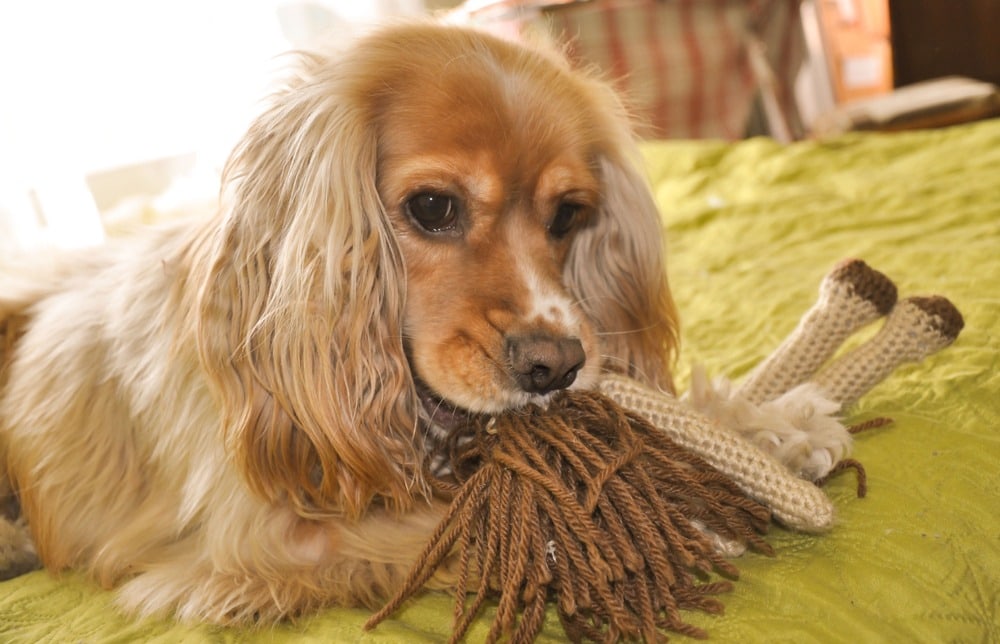 Cocker Spaniels originated in Spain in the early 14th century, mainly for hunting game. In fact, it is thought that their name comes from their adept skill in flushing out woodcocks for hunters. The beautiful and elegant appearance of Spaniels both then and now is a much-renowned aspect of this breed, as well as their skilled hunting proficiency. They have long and silky ears, dark and heart-melting eyes, and a beautiful soft, silky coat. This coat is famous and caused the breed to be initially divided into four distinct categories: Blenheim (red and white), King Charles (black and tan), Prince Charles (white, black and tan), and Ruby (solid red).

The English Toy Cocker Spaniel has served as a companion animal for many kings, queens, and monarchs and was recognized by the American Kennel Club as early as 1886. This royal streak carries over into their personality, and they can be proud, dignified, and somewhat fussy at times. That said, raised in a happy family household, they make for playful, affectionate, and gentle pets.

Of all dog breeds, Cocker Spaniels can produce some of the most varied puppies in a litter. They can have a huge variation in size, colors, and patterning and can have anywhere between three and 12 puppies per litter.

2. They were classified as cockers and springers

Spaniels have a long history and have been mentioned in art and literature for over 500 years. The breed was initially divided into land spaniels and water spaniels, called cockers and springers. This differentiation was mostly based upon weight, and cockers and springers could even come from the same litter. Cockers were bigger and used on land to flush out game, and the smaller springers were used in water. Today, the differentiation in springers and spaniels is far more than just weight, and they have become different breeds unto themselves.

3. They are highly intelligent

While these dogs are well-known for being loyal companions and cuddly lap dogs, they are also highly intelligent. The Springer Spaniel and Cocker Spaniel are in the top 20 list of the most intelligent dogs in the world.

English Toy Cocker Spaniels are friendly, intelligent, alert, and curious dogs. They will form strong bonds with humans and are well-known and highly prized for their loyal and affectionate nature. Their happy, cheerful disposition and seemingly perpetually wagging tail has earned them the nickname “merry cocker.”

These dogs make great family pets. They are rarely aggressive and highly social and love to be around people. Their playful and happy nature makes them ideal for children, and they will love playing games with them in the backyard. They are a highly adaptable breed, although they are fairly sensitive and can be easily stressed by loud noises and rough handling.

They are friendly, sociable, and generally non-aggressive, so they will get along great with other dogs and pets. That said, they should ideally be socialized at a young age, as they are sensitive to strange dogs and pets. If they are brought up with other family pets, they will usually form a lifelong bond with them. Their hunting heritage may make smaller family pets look like an appetizing treat, so they should ideally be trained against this habit as early as possible.

Things to Know When Owning an English Toy Cocker Spaniel

The Toy Cocker Spaniel is a small dog and doesn’t require massive amounts of food. They love to eat, however, and will happily munch away all day long if given the chance. They should not be freely given food, as these dogs can quickly get overweight. The best quality dry kibble that you can find is ideal for your Spaniel, with added meat or wet food whenever possible for variety and added moisture. There is still debate about whether to feed your dog raw or cooked meat, as opposed to kibble. This is because commercial kibble can often contain harmful filler ingredients, like corn and soya, which can be detrimental to your dog’s health. Dairy products, too many grains, chocolate, and fatty meats should also be strictly avoided, as these can swiftly lead to health issues and rapid weight gain.

Protein is an important component in your Spaniel’s diet, and while it can be found in commercial kibble, it is best acquired from good-quality meat and fish. A good amount of fat is also essential, as it will help maintain healthy skin and coat and help protect the dog’s internal organs. Because Spaniels are prone to overeating, fat intake should be carefully monitored and given sparingly.

Most dogs need around 25-30 calories per pound per day to maintain a healthy weight, so your Spaniel will need to get about 240-450 calories a day to stay healthy. This caloric intake will vary slightly, depending on your Spaniel’s age, size, and energy levels.

English Toy Cocker Spaniels are laidback, low-energy dogs who love to cuddle with their owners on the sofa and don’t require massive amounts of exercise. That said, they do need regular exercise in order to stay healthy and happy. They love to go for regular walks, and their hunting ancestry makes them love to sniff out new places. This means that they will benefit greatly from varied exercise activity, and changing up your routine will also give them new and different mental stimulation. English Toy Cocker Spaniels also love to swim, and this can also be incorporated into their weekly routine for added fun and varied exercise.

Their innate hunting and retrieving instincts will make them love games like fetch and chasing balls and other toys. These types of games are highly beneficial because they provide both physical and mental stimulation.

English Toy Spaniels are highly intelligent animals, and training them is usually a breeze. Training sessions should ideally be between 10-15 minutes, depending on your specific dog, and kept shorter for puppies. Training sessions that are too long can cause your Spaniel to become easily bored, and they will stop responding to commands, or this boredom may undo the hard work you’ve already done.

Spaniels can be somewhat stubborn, which can become a problem when training them. That said, they do have an innate desire to please, so getting started with training as early as possible will help. They are a sensitive breed, and gentle training methods like positive reinforcement training are the preferred method. This method, in its simplest form, consists of rewarding your Spaniel when they behave well with praise or treats and largely ignoring them if they behave badly.

The English Toy Spaniel is a fairly high-maintenance breed. They have a thick, long, and silky coat that will require daily brushing in order to keep it from matting. The ears, tails, and legs are usually heavily feathered and will require extra care. Special care should also be taken on the inside of the ear canals, where the excess hair can cause a block in air circulation, which can result in dirt and bacteria build-up and may eventually lead to infection. If you notice your Spaniel incessantly scratching and rubbing their ears, there may be the beginnings of an infection present. It is good practice to keep your Spaniel’s ear canals as dry as possible and perform regular cleaning and checks.

Their nails will need trimming once or twice a month, and regular teeth brushing at least once a week will prevent plaque build-up and dental issues.

Hip dysplasia is fairly common, caused by an abnormal formation of the dog’s hip joints. This disorder can also lead to arthritis. Patellar luxation, the persistent dislocation of the kneecap, also commonly occurs among Spaniel breeds. Canine dilated cardiomyopathy occurs in adult Spaniels, which causes the heart to be weak and is often accompanied by abnormal heart rhythms.

An issue commonly associated with Spaniels, although somewhat unfairly, is rage syndrome. Although this is most commonly found with show Spaniel breeds and is fairly rare, it still occurs. With this syndrome, the dog attacks suddenly and without warning, for no real perceived reason. The dog will usually get a glazed-over look in their eyes and will be seemingly unaware of what’s going on around it. It is difficult to predict rage syndrome, and even diagnosis by ECG or genetic testing frequently comes up inconclusive. With a stable and gentle upbringing and good training, the occurrence of this disorder is so rare as to be negligible. This disorder is strongly associated with Spaniels but occurs just as much in several other dog breeds.

It is widely recommended to neuter male dogs, which will help reduce any aggression issues he may have, reduce the chance of testicular cancer, and stop him from wandering. Spaying females also has many health benefits, including the prevention of uterine infections and cancer.

Males are usually larger than females, with bigger heads and stronger legs, but are usually only 1 or 2 inches taller. They are generally more independent and playful, even into their older years. Females are playful when puppies but can lose this playfulness as they get older. Males are also known to be more affectionate than females, without the propensity for mood swings that females can often have. Both males and females will usually attach themselves to an individual owner and will suffer from separation anxiety when left alone for extended periods.

The English Toy Cocker Spaniel is an intelligent, lovable, playful, and friendly dog who will quickly win over your heart with their droopy ears and big, endearing eyes. They can be stubborn sometimes, possibly due to their royal heritage, but with early socialization, they will usually be easygoing and friendly.

They make for great family pets, as they will love to play for hours with children in the yard and enjoy regular walks and swims with their owners. While they can be fairly high maintenance, they will relish in daily brushing and regular baths, and this is more of a bonding experience than a hassle. If you are looking for a low-energy but playful, sofa-loving family pet, the English Toy Cocker Spaniel may just be the ideal choice.