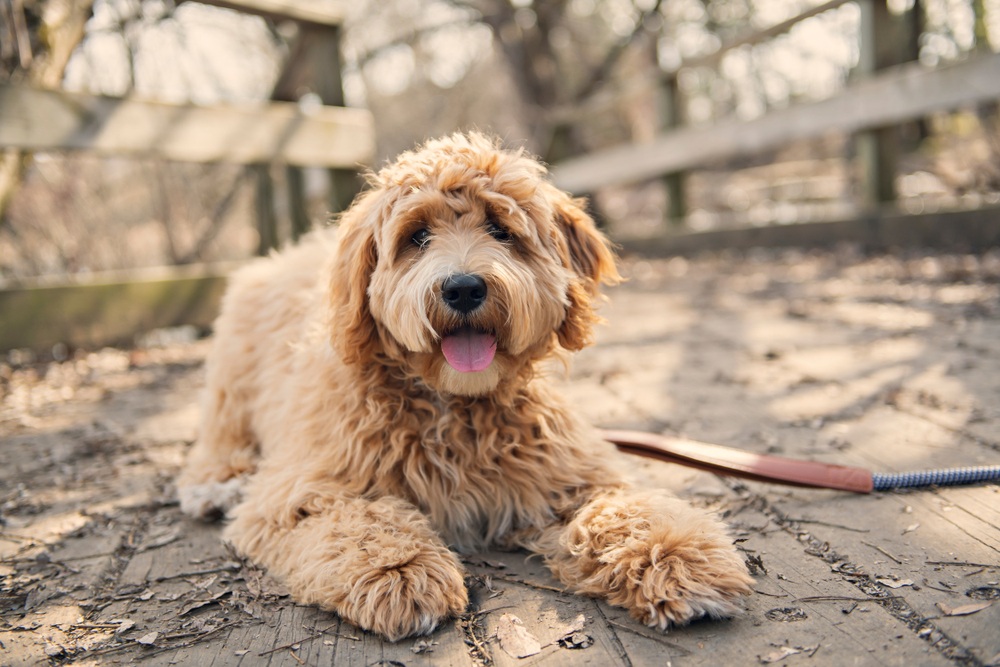 Even if you’re not overly familiar with hybrid dog breeds, there’s a good chance you’ve heard of the Labradoodle. This mix combines the appearance and personality of a Labrador Retriever, America’s most popular dog breed, with that of a Poodle. What do you get when you mix these two breeds? A big, lovable teddy bear.

But Labradoodles aren’t just popular for their adorable appearance. Many people choose to call a Labradoodle their own because of their hypoallergenic coat and their high level of intelligence. Many Labradoodles even find their way into therapy and service work.

On paper, these fluffy pups seem like the ideal companion for most dog lovers. As with any dog, however, you need to know a thing or two about this “designer” breed and their day-to-day needs before jumping into owning a labrador poodle mix.

Labradoodle Puppies — Before You Welcome One Into Your Family…

As puppies, Labradoodles look like tiny, fuzzy teddy bears. Though they’ll get bigger with age, of course, these dogs never quite outgrow their puppy charm.

Labradoodles are often marketed as the ideal family dog, melding the Labrador Retriever’s personality and energy with the intelligence and hypoallergenic coat of the Poodle. In reality, this cross-breed can be a great deal to handle for first-time dog owners or those looking for a more hands-off canine companion.

Another thing to consider is the Labradoodle’s status as a designer breed. What does this mean?

The Lab Poodle mix awkwardly straddles the worlds of purebred and mutt. On the one hand, Labradoodles are purposely bred and sold for tons of cash. On the other, the cross-breed is not recognized or regulated by any major dog organization (at least in the United States). Many breeders also turn to in-breeding to achieve desirable puppies.

Yes, Labradoodles can make incredible pets, and there are countless well-intentioned breeders out there. But maybe you should also ask yourself, “Why pay a premium price for a dog that at the end of the day, has the genetics of a mutt?”

While many prospective owners believe the Labradoodle automatically inherits the Poodle’s hypoallergenic trait, this is often not the case. Unfortunately, this also means many Labradoodles end up causing discomfort for misinformed households.

The Labradoodle might boast a Poodle-like coat, but hair type has nothing to do with canine allergens. Instead, your allergies are probably triggered by the dander (a.k.a. dead skin cells) coming off your dog.

2. The First Labradoodle Came From Australia

The very first Labradoodle was bred in 1989 by an Australian named Wally Conron (who today, actually regrets creating the hybrid breed!). Conron’s inspiration came from a blind woman who needed a hypoallergenic guide dog, hence the decision to cross the Labrador Retriever with a Poodle.

3. There’s a Labradoodle for (Almost) Every Color of the Rainbow

According to the breed standard, the Labrador Retriever only comes in three colors: chocolate, black, and yellow. But when you look at the Poodle’s official color standard, there are almost a dozen recognized hues to choose from!

Labradoodles come in a variety of colors and patterns, from stark white to tri-colored. In this regard, the Labradoodle definitely takes after the Poodle.

Despite what many lovers of the cross-breed believe, Labradoodles can also have more than one type of fur. While the most popular coat texture is wavy, you can also find puppies with extremely curly and straight fur!

Temperament and Intelligence of the Labradoodle 🧠

Labradoodles are naturally social and excitable, especially at a young age. With consistent socialization and training, though, these traits can be easily managed. A well-adjusted Labradoodle is friendly, mellow, and ready for anything the world has to offer.

Despite what we’ve said about the Labradoodle’s outgoing and social personality, we can’t stress enough the importance of socialization and training. Labradoodles who have not been taught to manage their excitement, especially around strangers and other dogs, can quickly cause issues.

Before bringing home a Labradoodle puppy, take note that poor genetics often lead to behavioral and temperamental issues. While this is true for any dog — purebred, hybrid, or full-on mutt — it is a well-documented problem within the Labradoodle community. By prioritizing a dog’s physical appearance (in the form of inbreeding or other unsafe practices), a whole host of mental problems can rise to the surface.

The Labradoodle is an excellent family companion, but like any breed, there are a few things to keep in mind.

Most Labradoodles are fairly large, reaching up to 65 pounds, so these eager playmates will easily mow down small children. This isn’t an issue for all families but is something every parent should know before introducing a Labradoodle to their home.

Also, the average Labradoodle may adore its family, but don’t expect this dog to protect you or your children in an emergency. Labradoodles are bred to be friendly and relaxed around strangers, making them terrible guard dogs.

The Labradoodle does extremely well with other pets, including fellow dogs.

Because of its generally low prey drive, the Labradoodle is a great option for households with cats or small dogs. Regardless, you should always take precautions and supervise your Labradoodle around small animals for everyone’s safety!

Things to Know When Owning a Labradoodle

Does the Labradoodle sound like the ideal companion for you and your family? If so, there are a few more things you should know before leaping into owning one of your own:

On average, Labradoodles need about 3 cups of dry dog food per day. Please reference the feeding guidelines of your chosen food — every formula has slightly different serving recommendations.

Since Labrador Retrievers and Poodles are prone to obesity, we suggest monitoring your adult Labradoodle’s weight, appetite, and activity level throughout their lifetime. If you have any concerns about your dog’s weight, schedule an appointment with your vet to learn more.

Depending on a Labradoodle’s age and overall health, these dogs require between 30 and 60 minutes of strenuous exercise each day. You should also aim to go on two long walks per day.

The Labradoodle’s intelligence can’t be understated, meaning that they require both physical and mental stimulation. While puzzles are a great way to meet these needs, adventure walks (meandering walks or hikes where your dog can sniff and explore a new environment) are also an excellent choice.

If you live in an apartment, a Labradoodle probably isn’t the right companion for you. A lack of room to run around and burn excess energy can rapidly breed destructive habits.

Labradoodles are eager-to-please and up for all types of training, whether basic obedience or canine sports. The combination of high intelligence and overall friendliness makes the Labradoodle great for experienced and first-time dog owners who are willing to invest in lifelong training.

However, if you think a Labradoodle is a hands-off companion who will train themselves, you’re in for a rude awakening. Even naturally friendly dogs can suffer if not properly socialized from an early age.

If mismanaged, the Labradoodle’s energy levels can also get in the way of effective training. To get the most out of you and your dog’s budding relationship, we recommend following the exercise advice mentioned in the previous section.

Don’t be fooled by their fluffy appearance — Labradoodles generally do just fine with weekly brushing sessions. The tighter your dog’s curls, though, the more attention their coat will require.

Like Poodles, Labradoodle coats can be cut in a variety of functional and fashionable ways. If you plan to go this route with your pup’s fur, we suggest finding a skilled and reputable groomer in your area.

While baths can be given every four to six weeks, you can have your Labradoodle’s coat trimmed as infrequently as twice per year. Your dog’s specific fur type and preferred cut may affect this timeframe slightly.

As a hybrid, or “designer,” breed, the Labradoodle is no more or less likely to develop serious health conditions. However, the lack of standardized breeding and immense popularity means many Labradoodles carry poor genetics.

Labradoodles are most affected by conditions common among Labrador Retrievers and Poodles. Regular vet visits can help keep your pup healthy and catch early signs of disease.

Here are the most common health conditions known to affect Labradoodles:

It’s important to remember that every dog, no matter the breed, is a unique individual. With that said, breeders and owners alike seem to agree on differences between male and female Labradoodles.

Like many dogs, male Labradoodles tend to be more affectionate and playful than their female counterparts. In contrast, females are more independent and aloof. Males also tend to be larger and heavier than females, though the difference is typically just a few inches or pounds.

Whether you choose a male or female Labradoodle, it’s important to remember that differences in temperament and appearance come down to genetics and training more often than the dog’s anatomical sex.

Looking past the (often well-deserved) controversies surrounding Labradoodles and their purposeful breeding, it’s clear why so many have grown to love the mixed breed. With the charming personality of a Lab and the striking looks and brains of a Poodle, some might even say that Labradoodles are the ideal dog.

Still, no dog is perfect for every prospective owner. Labradoodles require tons of daily exercise and mental stimulation and failing to properly train and socialize one of these dogs can leave you with an over-excited ball of energy on a leash.

But if you’re up for the day-to-day challenges of raising a Labradoodle and you’re alright to invest the time and money to purchase/adopt one responsibly, we see no reason to discourage readers from owning this hybrid pooch!