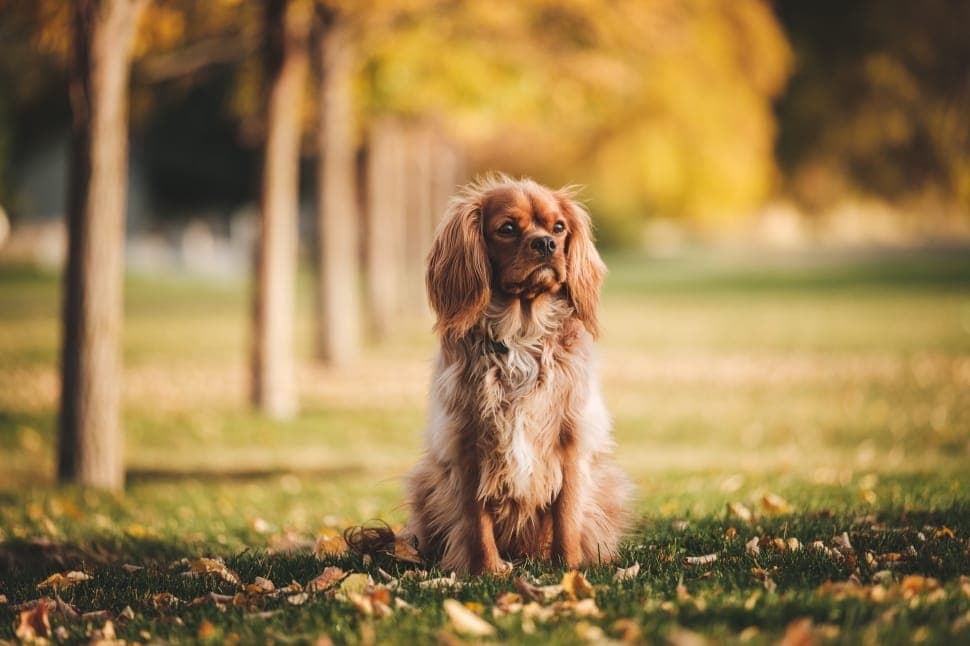 Currently ranked as the 30th most popular dog according to the American Kennel Club (AKC), the American Cocker Spaniel is an affable breed that gets along with everyone. Originally bred as a hunting dog, they’ve grown into an excellent family dog and personal companion.

These are small to medium-sized dogs, topping out at about 16 inches in height. They’re recognized as part of the sporting group of dogs, so they’ll need plenty of exercise. This means they’re also intelligent and good learners, so training shouldn’t be an issue.

Many dog breeds aren’t good choices for first-time dog owners, but the American Cocker Spaniel is an easy-going partner without any excessive maintenance needs. Their good nature also makes them easy to be around for all and makes them the perfect family pets.

American Cocker Spaniel Puppies – Before You Get One

1. They’re the Smallest of the Sporting Group Dogs

As mentioned, the American Cocker Spaniel is part of the sporting group of dogs, recognized by the AKC. All sporting dogs were originally bred for hunting. This means they’re naturally energetic and alert, making them excellent working dogs as well as companions.

Aside from Spaniels, the other sporting dogs are Pointers, Setters, and Retrievers. Of them, the American Cocker Spaniel is the smallest.

2. Their Name Comes From Birds

Spaniels were used as flushing dogs, which means they were to locate the prey and flush it out, forcing it to fly towards the hunter who lays in wait. This requires precision, intelligence, and excellent teamwork between canine and hunter.

3. They Excel at Sport and Show

Due to the nature of Woodcock hunting, Cocker Spaniels had to be fast, agile, quick learners, and excellent at following directions. Today, these skills often playout for the spaniel in different arenas — sport and show.

Recognized and pedigreed by the AKC, the American Cocker Spaniel is an excellent show dog, winning many awards and championships over the years. But that’s not all they can do, because this breed also performs admirably at canine sports.

The agility and speed the Spaniel once used to chase down and flush out Woodcocks now get channeled into agility and obstacle courses with great success. These dogs naturally take to sports, enjoying them for physical and mental stimulation.

Spunky and playful, this breed wants to be friends with everyone. Don’t expect your Spaniel to make much of a guard dog! But if you want a loving family member for the kids to play with in the backyard that will also come cuddle up on your lap during movie night, then the American Cocker Spaniel is definitely worth consideration.

These are very intelligent dogs that can learn quickly. Similar to the close bond they shared with hunters, they will bond strongly with family members. They want a lot of attention and affection, and they’re just as quick to smother you with it in return.

Cocker Spaniels are people-pleasing dogs. They don’t ever want to let you down and will be overjoyed when they think they’ve made you happy.

It’s hard to picture a breed that’s better for families than the American Cocker Spaniel. They’re excellent with children, making great play partners. And since they’re not very large, you don’t have to worry much about them hurting a small child by accident.

Because the Spaniel wants so much attention, they do best with families where there’s usually someone around to supply some love.

More than just humans, the American Cocker Spaniel gets along with just about everyone. Other pets are generally not an issue, especially if the Spaniel has been socialized from an early age. They don’t have a strong prey drive and their loving nature makes them immediately friendly with most creatures.

Things to Know When Owning an American Cocker Spaniel

Cocker Spaniels are relatively small dogs, so they don’t need too much food. But they’re always ready to eat, which means they’re quite susceptible to becoming overweight and even obese.

It’s recommended that you measure out how much food you provide your Spaniel to ensure that they’re getting sufficient nutrition without overeating.

These dogs have a lot of energy and stamina that were prized for hunting. You’ll need to provide plenty of opportunities for exercise and play to keep your Cocker Spaniel healthy and happy. But they don’t need too much space at home because they’re so compact. This makes them great for smaller homes and even apartments.

Because hunting dogs need to learn quickly and follow directions well, the American Cocker Spaniel naturally takes well to training. They love to please, so if you provide some positive encouragement, you should have very little trouble training a Cocker Spaniel. They’re very intelligent and intuitive and they love the mental stimulation as well.

Cocker Spaniels have thick, wavy coats that need a lot of upkeep. This is the most complicated part of owning one of these dogs.

Daily brushing is a must, as well as coat trimming every six to eight weeks. They need to be bathed regularly and sometimes need the excess hair picked out by hand.

Because of the strenuous nature of Spaniel grooming, most owners simply pay a professional who can do it better and faster. But that can get expensive, and groomers know the work that goes into a Spaniel, so you can expect to pay even more for grooming this breed than others.

There are quite a few health concerns known to plague Cocker Spaniels that you should be on the lookout for. Some of these are curable or treatable, but others aren’t. There’s no guarantee that your Spaniel will develop any of these conditions, but it’s a good idea to be preemptive with vet visits and care for your pet.

When it comes to serious conditions, hip dysplasia is a very common condition with many breeds, including the American Cocker Spaniel. It can be painful and even debilitating, though with treatment the pain can be managed.

Hip dysplasia is a malformation of the hip that starts when a dog is young. As they age, the malformation gets worse and the top of the leg won’t fit properly in the hip socket, instead, rubbing against it, causing pain and limiting movement.

Also serious in nature is progressive retinal atrophy (PRA), a degeneration of the retinal cells. It’s a name that covers a group of similar afflictions, all of which will eventually lead to blindness.

Lastly, luxating patella is the term for a joint that’s out of place. It can cause limping or skipping, but generally pops back into place. It’s essentially a looseness in the joint.

Though male American Cocker Spaniels tend to be the larger and heavier members of the breed, it’s the females who take on the dominant role. They tend to display more independence than their male counterparts, which often results in stubbornness.

Moreover, females tend to get less distracted than males. This makes them easier to train and can even make for a better working dog.

There’s are plenty of good reasons why the American Cocker Spaniel is one of the most popular dogs there is. They’re playful, good-natured, and downright fun. It’s hard not to love a dog that bonds so closely with its family and works so hard to please them.

This breed is excellent for any family, even if they live in a small home or apartment. Since they’re not very large, they don’t need as much space as some other breeds. But that doesn’t mean they don’t need exercise! These are energetic dogs that were bred to work, so you’ll need to provide plenty of mental and physical stimulation to keep a Spaniel happy.

As far as purebred and pedigreed dogs go, the Cocker Spaniel is one of the more affordable ones. They can make a great entry into dog shows or sports since they excel at and seem to enjoy both. Just keep in mind, you’ll need to do a lot of grooming and maintenance with this breed, so if that sounds daunting, then the Spaniel isn’t for you.