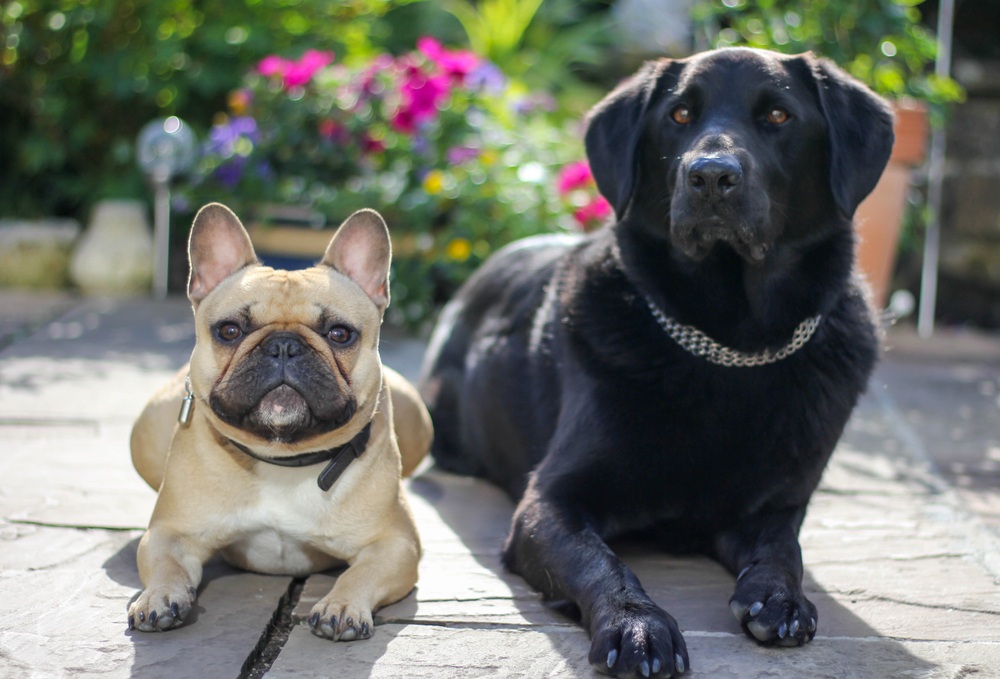 What happens when you cross the laid back French Bulldog with the active, lovable Labrador Retriever?

A play-hard, love-hard combination seen in the Frenchie Labrador.

The Frenchie Lab takes the best of both of its parent breeds to become a perfect addition to just about any home. And because the two parent breeds are pretty different as far as temperament, each Frenchie Labrador is going to be its very own blend of personality.

Although this pup is relatively new to the dog world, it’s already capturing the hearts of everyone who decides to raise one.

Frenchie Labrador Puppies – Before You Bring One Home…

French bulldogs are stout little bundles of love and are typically classified as medium-to-small sized dogs. However, the Frenchie Labrador tends to take on more of the physical attributes of the Labrador Retriever.

So, if you’re looking for a small dog, the Frenchie Labrador might not be the best bet for you. A fully grown Frenchie Lab can grow up to 50 pounds.

Another thing to consider is the temperaments of the parent breeds. For example, French Bulldogs are often very protective of their owners around strangers, whereas a Lab might just barrel over to go lick that same stranger in the face.

This huge difference ensures that each French Labrador puppy will be different. That’s why you’ll need to invest time in training your new pup’s personality while they’re still young. Learning how your puppy reacts and responds to stimuli will be crucial in proper training and behavior later in their lives.

1. They Can Have Bat Ears

Just because they’re sized more along the lines of the Lab doesn’t mean your Frenchie Labrador won’t get anything from its French Bulldog parentage. As a matter of fact, it’s extremely common for them to have the trademark “Bat Ears” that French Bulldogs have.

2. They’ve Got No Real Origin Story

While some designer dogs have pretty interesting backstories, this breed doesn’t. They just kind of showed up one day, and that was that. And the mix still isn’t as popular as many other designer breeds.

3. Frenchie Labradors Have A Wide-Ranging Lifespan

The lifespan of a Frenchie Labrador is between 9 and 15 years. That’s a gap of 6 years and very peculiar when it comes to dogs. Normally, the range falls within 2-3 years. So why the difference? Nobody’s exactly sure. This could have something to do with genetics between the French Bulldog and Labrador Retriever, but we can’t be certain.

Temperament & Intelligence of the Frenchie Labrador 🧠

The Frenchie Labrador is very unique when it comes to temperament. This is because its parent breeds are so different. French Bulldogs are super loyal and even protective of their masters, while Labradors are more friendly and sociable.

That doesn’t mean that the French Bulldog side will completely take over, nor will the Lab side. These pups are known for being super friendly and lovable. But each will have their own little personality quirks that will separate them out from other Frenchie Labradors.

Frenchie Labradors make absolutely wonderful family pets! They’re very good with children and just love having playmates! And after a hard day’s play, they love nothing more than to snuggle up with you and let you know just how they love you.

You’ll be hard-pressed to find a more sociable breed. Frenchie Labradors will make friends with just about everyone — people or animals alike.

Things to Know When Owning a Frenchie Labrador:

Being medium-to-large sized dogs, the Frenchie Labrador requires a substantial amount of healthy, nutritious food each day to be at their very best. They should be fed, on average, three cups of food every day.

And that doesn’t mean three cups at once. Space out their feeding at appropriate intervals. And while with some dogs you can fill up a bowl and let them self-regulate their eating, you can’t with the Frenchie Labrador.

That’s because of the Labrador Retriever in them. If you’ve ever owned a Lab before, you’ll know just how much self-control they have when it comes to self-regulating their food intake ­—zero.

We’re pretty sure they’re just four-legged garbage trucks devouring everything they can.

These dogs just love to play!  They’ve got a great energy level and just love to be active. But just like most aspects of the Frenchie Labrador, their activity level depends heavily on which parent breed they take after most.

A Frenchie Labrador with more bulldog in them needs less activity per day — roughly 30-45 minutes. However, if they favor their Labrador side more, they need approximately double that in daily activity and exercise.

Both French Bulldogs and Labrador Retrievers are intelligent breeds, so it only stands to reason that their offspring would be as well. And while it’s true that Frenchie Labradors are very intelligent, they’re also exceptionally stubborn at times.

That’s why it’s best to train them young. Often, they’ll take to training very quickly. But there’s always one or two that’ll be a bit rambunctious. And that’s not a lack of intelligence either. Your pup might just be too smart for their own good.

When not properly stimulated, intelligent dogs can turn to undesirable habits such as unnecessary barking or chewing.

As far as grooming goes, the Frenchie Labrador is relatively low maintenance. They have dense short hair, but don’t shed too much. Typically, you’ll see more hair loss and shedding during hotter seasons and more growth during the cold.

Their short hair makes it easy to groom them as well. A quick once over with a slicker brush is really only needed when they’re starting to shed or start looking a bit haggard.

A big thing to note is that the Frenchie Labrador is not hypoallergenic. If you have allergies to dog hair and pet dander, this might not be the best pet for you.

Other than their hair, Frenchie Labs may need special face cleaning—particularly if your pup has more French Bulldog in them. Your dog may have some skin fold in their face that will trap dirt, grime, and whatever they decide to get into.

When it comes to the health of these pups, they’re relatively robust when compared to other dogs. They do, however — like most designer dogs — take on inherited illnesses from the parent breeds.

Fortunately for the Frenchie Labrador, most of their potential health issues can be prevented or mitigated through a properly balanced diet.

There are no real major differences in size or temperament between the males and females of this breed.

Although not as popular as other designer breeds, the Frenchie Labrador is a real winner. They’re smart, loving, loyal pups that want nothing more to be part of a family.

Frenchie Labradors are just perfect for those looking for a great family dog that requires little maintenance.