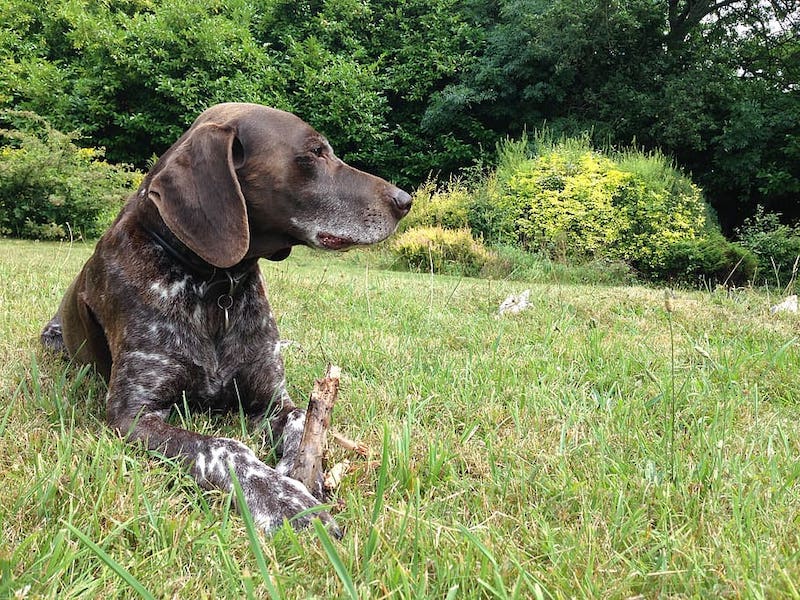 A loyal and committed companion with intense exercise requirements, the German Shorthaired Weimaraner is the ideal partner for the everyday athlete who spends more time out on the trail or running through the streets than they do lounging on the couch at home.

Seriously, this breed needs a lot of exercise and they won’t be happy unless they get it. Before you add one of these hard-working, athletic, loving dogs to your life, make sure you can actually fulfill the massive time and energy commitment that one of these dogs requires.

German Shorthaired Weimaraner Puppies – Before You Get One…

1. Both Parents Are Sporting and Hunting Dogs

Weimaraners were bred to hunt large game. We’re talking bears, wolves, deer, and more. That should tell you something about the courage and stature of the breed.

But the German Shorthaired Pointers are no slouches. They were also bred for hunting, though not for the same large game as Weimaraners. The Pointers were a much more versatile hunting dog that was used for retrieval of many different types of game. They also excel at agility sports and can even be found performing service work.

Because of their lineage, Germain Shorthaired Weimaraners can be expected to exhibit traits like intelligence, courage, and high levels of athleticism.

2. They Need Close to Two Hours Of Exercise Each Day

When it comes to exercise, this breed needs more than most. You’ll need at least two hours each day to devote to your dog’s exercise. This makes them the perfect companion for hikers, bikers, runners, and other athletes that are out all day putting on the miles.

Not every dog can handle those types of long sessions, but the German Shorthaired Weimaraner is one of the few that can. In fact, this dog will embrace it, being glad to go on each outing with you. They need your attention as much as they need exercise and including them in your exercise regimen is the best way to provide both at the same time.

Aside from their hefty attention and exercise needs, the German Shorthaired Weimaraner is a breed that needs very little maintenance. Both parents have short coats that need very little attention, so no matter which parent your puppy takes after more, it won’t require much in the way of grooming or cleaning.

This breed has a coat that naturally repels dirt, making it easy to keep them clean. The more they take after the Weimaraner, the more this is true. You’ll only need to bathe these dogs when they get exceptionally dirty from rolling around in the dirt. For the most part, they won’t need much upkeep.

Intelligent and utterly loyal, this breed is known for their obedience. They are easy-to-train dogs and they’re not considered to be aggressive. That said, they will bark at people they don’t know, alerting you to their presence.

These dogs are extremely loving. Though they’re pretty sizable, they don’t seem to realize it. They’ll often curl up right on your lap as if they were much smaller than they really are.

While that loving nature can be adorable, it also has a negative side. When you don’t provide enough attention, affection, or physical activity, your German Shorthaired Pointer can become quite destructive. They’re also susceptible to separation anxiety, though they’re destructive behaviors are often simply due to boredom.

One of the great things about this breed is that they’re known for being gentle with children. They’re also very obedient, which makes them easier to have around kids and strangers as well.

Since this breed needs so much attention, having multiple people in the household to play with and exercise the dog can help to avoid boredom and destructive behaviors.

This breed is definitely not suited for apartment living. They need lots of room to run around and exercise on their own as well as with you.

They’re best suited for houses with large, contained yards where the dog can safely run around and release all the excess energy they’ve got.

Things to Know When Owning a German Shorthaired Weimaraner:

A moderate to large-sized dog with hefty exercise requirements, you could probably have guessed that the German Shorthaired Weimaraner needs quite a bit of food each day. Each day, they’ll require about three cups of high-quality dry dog food with plenty of protein.

You might also consider adding a joint supplement to your dog’s food regimen, especially as they age. This can help reduce the chances of joint problems that many big dogs develop.

This is where the German Shorthaired Weimaraner is unique. Few dogs have the intense exercise requirements of this breed. You’ll need to provide two hours of structured physical activity each day, plus plenty of space for the dog to run around and release the rest of that energy.

With no apparent end to their energy reserves, you can expect to see some negative consequences in the form of destructive behaviors if you don’t manage to provide enough exercise for this breed.

The offspring of two hardworking hunting dogs, the German Shorthaired Weimaraner makes a very obedient, easy-to-train dog. They love to please, and they love to have a job to perform even more. Once you provide some basic obedience training for this breed, you’re likely to see a big improvement in their overall behavior.

Luckily, this breed requires very little in the way of grooming. They have short coats that need almost no attention. Plus, because of how active they are, it’s likely that your German Shorthaired Weimaraner’s nails don’t even need trimming. With enough activity, they might even wear themselves down to the appropriate length.

Overall, this is a very sturdy breed that comes from two hardy breeds with few common health concerns. But there are a few things to watch out for as your dog ages:

Hip dysplasia: This disease is very common in larger sized dogs. It’s a malformation of the hip that causes the femur to be out of place, no longer fitting into the hip socket properly. This will rub on the hip bone, causing pain and limiting movement. This is a condition that worsens with age and it has no known cure.

Gastric torsion: This is severe dog bloat when the stomach fills up unexpectedly with gas and twists upon itself. It can be fatal very quickly. It’s most common in deep-chested dog breeds.

Cataracts: Cataracts are an opaque, cloudy covering that forms in the eye. It can cause blindness if left untreated. This can be cured with surgery though, which can completely remove the cataract.

Entropion: This is an eye condition that causes the eyelids to roll inward, toward the eye. When this happens, the hair on the eyelid can rub on the cornea. This can cause pain, ulcers, or worse. However, it doesn’t always cause problems.

The differences between male and female German Shorthaired Weimaraners are minimal. The males are sometimes a bit larger, though generally not by much. They tend to weigh the same as females, but males can reach 27 inches in height while females generally top out at 25 inches.

Loyal, loving, obedient companions, there’s not much you can find in this breed to dislike. They have a great temperament, they’re excellent with children, and they’re easy to train. Naturally, they’re easy to love.

But don’t forget about the massive investment this breed requires in time and energy. They need two hours of physical activity each day, plus the space to run around and expend the rest of their incredibly large reserves of energy.

And if you don’t provide enough exercise and attention, your German Shorthaired Weimaraner can become bored and even develop separation anxiety. This will result in a destructive, athletic dog with tons of energy; not a great combination.

This dog makes an excellent companion and a loyal and loving friend, but they’re only suitable for people who can truly devote the amount of time, attention, and energy that this breed needs and deserves.