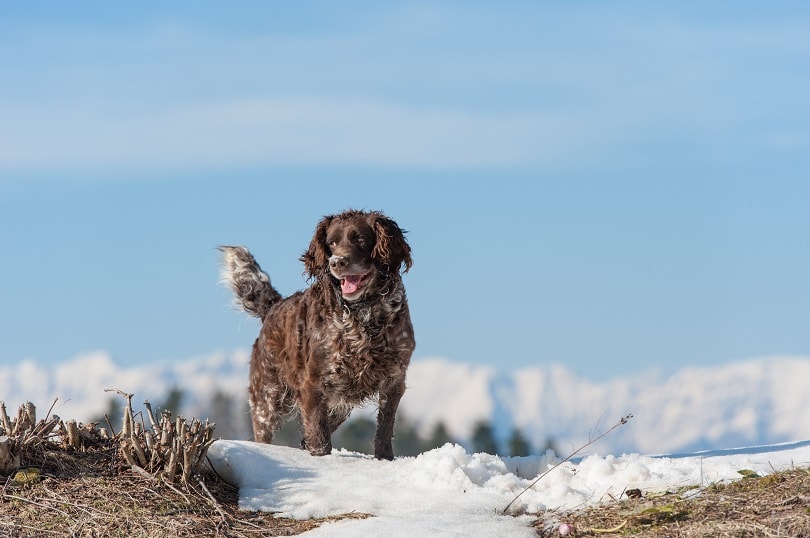 The Deutscher Washtelhund is a rare breed of dog, especially outside of Germany. They are best known for their tracking ability, which is comparable to a Bloodhound. They can track a 40-hour-old wounded game with ease. They are a versatile breed that can hunt everything.

They are not typically owned by those that don’t hunt. Usually, you only find these dogs bred and owned by hunters, gamekeepers, and professional hunters in Germany. However, recently, some of these dogs have been exported to the United States and other countries.

Temperament wise, these dogs are friendly and loyal. They listen to their owners easily and take quickly to training. Unlike most hounds, they can be called off their trail and return to their owner when recalled.

The Deutscher Washtelhund is a medium-sized gun dog. They are longhaired with a weather-resistant coat. They are bred for their keen hunting abilities. They also have an innate love of water, which also makes them perfect for retrieving waterfowl. They can hunt anything and perform many different jobs while hunting.

They are also known as the German Quail Dog and the German Spaniel. These names relate to this dog’s ability to flush birds, which is another of its many abilities. This breed is excellent at finding sparse prey in rough conditions, like in the mountains. They excel at water work, retrieving, and trailing game. These dogs track with their noses in their air when their game is far away, but they do place their nose on the ground when they get close to the trail’s source.

On top of their hunting ability, they are also great family dogs. They are friendly with people and are well-mannered in a home. They do the best living inside a home and do not do well with completely outside living like some hound dogs.

According to the Deutscher Washtelhund of North America, puppies usually cost between $800 to $1000 dollars. This is relatively inexpensive when you consider how large and rare this dog breed it.

Of course, because this dog is so rare, you may have to import puppies from Germany, where there are many different kennels. There are a few kennels in the United States. However, they only produce a few puppies every year.

Luckily, you can go through the DWNA to import a puppy if none are currently available in North America. However, the shipping cost is usually around $1000, which effectively doubles the price of the dog.

You can either wait on a puppy from a North American breeder or skip much of the wait by having a puppy shipped from Germany.

Pedigrees for this breed were not issued and managed until 1903. Therefore, before that point, this dog breed was not considered “purebred.” Instead, it was a conglomerate of other breeds, and mixing was standard.

2. The Deutscher Washtelhund is the last representative of the Stober category.

The Stober category is a type of hunting dog in Germany. The Deutscher Washtelund is the last representative of this category. All other dog breeds have gone extinct.

3. This breed started with only 11 dogs.

The founder of this breed, Rudolph Friess, chose 11 separated Deutscher Wastelhunds to begin his foundational stock. This helped him avoid inbreeding problems.

While the Deutscher Washtelhund is a hunting breed, first and foremost, they can still make good family dogs. They are not bred to be companion animals, so they are not typically as social as a Labrador Retriever might be. However, they are not aggressive in the least. They are quite friendly and are not timid. With that said, though, they do tend to choose to lie around instead of greeting visitors at the door.

When raised correctly, this dog is gentle and well-mannered indoors. This German Spaniel is easy to train because they tend to listen very well. They aren’t the smartest dogs. However, when they learn a command, they will respond to it almost all the time – which cannot be said for all dog breeds.

These dogs are decently gentle with children and do well with teenagers too. They are very sturdy and will usually put up with a bit of ear-pulling from toddlers. Of course, all interactions should still be monitored. These dogs are large and can do damage when they want to. Aggressive is still very rare, however.

The Deutscher Washtelhund can be an excellent choice for a hunting family with children of all ages. Their versatility means that you don’t have to own multiple different hunting dogs for different activities. They can do it all and beloved pets at the same time.

Does The German Spaniel Get Along with Other Pets?

They are typically okay with other dogs. They are not as pack-oriented as other hunting dogs, since they were bred to be mostly sole hunters. However, they are not particularly aggressive or territorial with other canines. Instead, they tend to be pretty even-tempered and friendly.

Of course, early socialization is still important. If you introduce these dogs to various canines at a young age, they will interact just fine with other canines.

However, this bred does not do well with other types of pets. They have intense hunting instincts. They will chase cats, birds, and rabbits. If introduced from an early age, they may do okay with cats and see them as non-prey family members. But this is never a 100% surety.

They do not do good with livestock either for this reason.

Things to Know When Owning a Deutscher Washtelhund:

The Deutscher Washtelhund does best with high-quality, high-protein dog food – like most canines. They are large and active, which means they can eat quite a bit of food at a time. They are not prone to over-eating or obesity, especially if they are taken hunting regularly.

Overall, this dog does not need any specific food or food with specific additions.

Because these dogs were bred to work hard for long periods, they need quite a bit of exercise. They can be taken for walks several times a day to meet this need, but they also love playtime in a fenced-in yard. They love water, so swimming is another reliable alternative.

They like most games, including fetch. Throwing balls into the water for them to chase is always a reliable option!

They can compete in activities like obedience, rally, and agility. Training for these events can be a great way to exercise your dog, even if you never actually compete in them.

These dogs do best with a moderate amount of space where they can run and sniff. They do best in fenced-in yards for this reason.

The Deutscher Washtelhund is pretty easy to train. They listen to their owners readily and pick up on commands decently fast. They were bred to do lots of different hunting activities, so they can usually learn many commands around the home. Their versatility bleeds into other aspects of their life beyond hunting.

These dogs love food and attention, so that these traditional encouragements can be used during training. However, many of them also love to play. Many owners have had success in training them with toys. This is done similarly to using treats, except you give them a second of playtime whenever they do a command correctly.

Because of their long coat, this canine should be brushed at least once a week. They usually do not shed too much. However, this occasional brushing can prevent their fur from becoming tangled and matted.

An occasional bath may also be required. They tend to get dirty while hunting and playing outside, so a bath may be explicitly needed on these occasions.

Like all dogs, you should trim their nails regularly and brush their teeth daily. You should also keep an eye on their ears. Dirt and wax can build up in their ears and cause infections if you aren’t careful.

These dogs are incredibly healthy. Because they are rarer, the breeders that breed them keep a careful eye on the breed’s health. When health issues arise, they are usually dealt with through careful breeding.

Besides this small problem, they are not known to be prone to any other disease.

Females are usually a bit smaller than males. However, this is the only significant difference between them. As far as temperament and hunting abilities go, the gender doesn’t matter.

The Deutscher Washtelhund is a rare breed that is mostly owned by hunters. Unless you’re a hunter, it is likely that you have never heard of this breed before. They are very versatile hunters – able to retrieve waterfowl like a Labrador and track wounded game like a Bloodhound.

They make good family dogs as well and tend to be friendly. They are not aggressive in the least when socialized early and often.

Harrier vs Beagle: Which Dog to Choose?