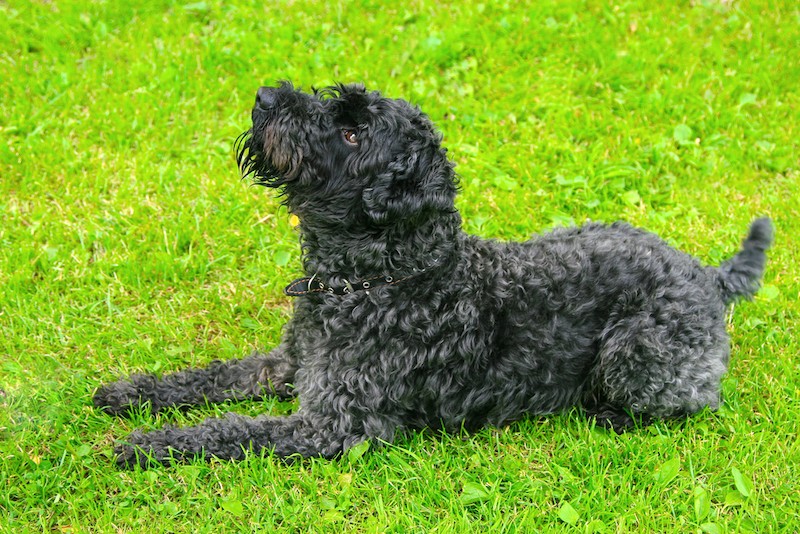 Reaching heights of up to 26 inches at the shoulder, the Giant Kerry Blue Schnauzer is a large dog, though not quite as sizable as the name would have you believe. They’re a cross between a Giant Schnauzer and a Kerry Blue Terrier, two playful breeds that are bursting with energy.

These dogs are highly intelligent and very family-oriented. They’re naturally protective over their family and generally more reserved with strangers. Like both parent breeds, the Giant Kerry Blue Schnauzer is a playful pup that’s ready to romp all day long. Because of this, they really need a yard that they can run around in to release that energy. This is a breed that can easily become very destructive if they get bored.

Giant Kerry Blue Schnauzers dogs are loving family pets, but they do have a strong prey drive that can easily take over. Even once trained, you’ll likely never be able to take your dog anywhere off-leash since their instincts might cause them to give chase to other dogs or animals.

The Giant Kerry Blue Schnauzer is what’s known as a designer breed, which just means that it’s a deliberate cross between two pure breeds. Often, designer dogs are cheaper than pure breeds since they aren’t recognized by any groups like the AKC and they’re not used for dog shows. But the Giant Kerry Blue Schnauzer is a pretty rare cross, so even finding a breeder of these dogs can prove difficult.

If you do manage to locate a breeder, the price of your Giant Kerry Blue Schnauzer puppy can vary drastically. On the cheaper side of the spectrum, you should expect to pay no less than $500 to add one of these puppies to your life. That said, don’t be surprised if you see prices that are much higher. Prices as high as $1,500 are not uncommon for this breed.

A major factor in the price you pay is the quality of the breeder you’re purchasing from. Backyard breeders might not provide the same level of care that professional breeders do, which is why they usually sell puppies for much cheaper.

Because this breed is somewhat rare, you might have to search diligently to find a breeder at all. But there’s another option available as well; adoption.

Again, you might need to do some serious searching, scouring the internet to find a Giant Kerry Blue Schnauzer available for adoption. But if you find one, you could save yourself quite a bit of cash since adopting a puppy generally only costs about $300.

1. Both Parent Breeds Were Hard Workers

Though most Giant Kerry Blue Schnauzers today live pampered lives as beloved family members, their parents tended to live much harder lives as working canines. Giant Schnauzers have long been used for a variety of jobs in Germany. For instance, they were used as police and military dogs in both major world wars.

Kerry Blue Terriers have also been working hard for many generations. These dogs were bred as hunters and farm dogs. Given the nickname of “blue devil,” these dogs were tough and courageous. In fact, they were even used to bay badgers. On the farm, they herded sheep and cattle, proving their usefulness as well-rounded workers.

2. They’re Aggressive Towards Other Dogs

Because of the Kerry Blue Terrier blood inside these dogs, it’s not surprising that they have a strong prey drive. As mentioned, Kerry Blue Terriers were adept at chasing down and baying badgers, which are some dangerous creatures that aren’t to be taken lightly. That same strong prey drive still exists in the breed today and has even been handed down to the Giant Kerry Blue Terrier. They still want to jump at every small animal they see, so expect to have to stop them from running off from time to time.

Shedding can be extremely annoying for dog owners, causing your house to fill up with piles of loose dog hair in every corner. Luckily, the Giant Kerry Blue Terrier isn’t known to shed a lot. Neither parent breed sheds much either, so it makes sense.

Overall, these are friendly dogs that can be reserved with strangers. Their parents were used for a variety of jobs including policing and guard dog work, so it makes sense that they’re naturally protective. Likewise, these dogs are very smart and they can be given tasks to complete or jobs to perform. They need the mental stimulation, in fact, to help prevent them from becoming bored. If your Giant Kerry Blue Terrier gets bored, you’re going to have a very destructive dog on your hands.

On top of being hard-working and protective, these dogs are also very energetic. They love to play and run around. Expect to spend a good deal of time helping your Giant Kerry Blue Schnauzer to expend all that energy, or once again, a destructive dog is likely to be your result.

Because of their naturally protective nature and their high energy levels, Giant Kerry Blue Schnauzers are great family dogs. They need a lot of exercise and attention, which is easier to provide with multiple people in the household. Likewise, they need a lot of space, so an apartment isn’t optimal for one of these canines.

Unfortunately, because of their high prey drive and tendency to be aggressive towards other animals, Giant Kerry Blue Terriers do not get along well with other pets. If socialized early and often, yours might learn to tolerate another animal. But they’d have to have grown up together from the time they were puppies. Otherwise, it’s generally best for these dogs to be the only pet in the household.

A post shared by Reba The Giant Schnauzer (@rebathegiant)

Things to Know When Owning a Giant Kerry Blue Schnauzer:

These are pretty sizable dogs, so expect your Giant Kerry Blue Schnauzer to eat quite a bit. Three to five cups of high-quality dry dog food each day should do the trick. Ideally, you should match the food you’re providing to your dog’s life stage. So, puppies should have a puppy food blend, seniors should get a senior-specific food, and so on.

Since they’re loaded with energy, these dogs need a lot of exercise. You should expect to spend a minimum of an hour each day on wearing down your Giant Kerry Blue Schnauzer’s energy. If you don’t, you’re likely to have a very destructive pet tearing up your yard and home.

That hour needs to be spent on vigorous activity. A slow walk down the street isn’t going to cut it. Instead, try having a high-energy play session with a game of fetch or something similar.

Coming from two working breeds, the Giant Kerry Blue Schnauzer is a very smart dog that excels at training and performing jobs. They can understand what’s being asked of them, but getting them to do it can be the difficult part. It’s recommended that only those with previous dog-training experience attempt to train one of these dogs.

Luckily, this breed is rather low maintenance when it comes to grooming. Neither parent sheds much, so your Giant Kerry Blue Schnauzer isn’t likely to either. In fact, both parents are hypoallergenic, which means your Giant Kerry could possibly be as well.

You’ll want to brush your Schnauzer daily to make sure their coat doesn’t become matted and tangled. Bathing should only be performed when absolutely necessary.

These dogs do require some trimming, which is often best left to a professional groomer, so consider the extra time and expense that entails before adding one of these dogs to your family.

One advantage that mixed breeds are thought to have over pure breeds is that they are less susceptible to health concerns that might plague either breed. While this often means that designer dogs have fewer health issues to worry about than pure breeds, that’s not always the case. Unfortunately, the Giant Kerry Blue Schnauzer is at risk for quite a few medical conditions.

Though they’re not as giant as their name might suggest, Giant Kerry Blue Schnauzers are big dogs that are bursting with energy and playfulness. They make great family pets, particularly if you’ve got a bit of previous experience with dogs. They’re naturally protective and relatively low-maintenance, aside from their need for 60 minutes of intense exercise each day. If you have the time to devote to making sure your dog gets adequate exercise and never gets bored, then this breed might be a great fit for you and your family.