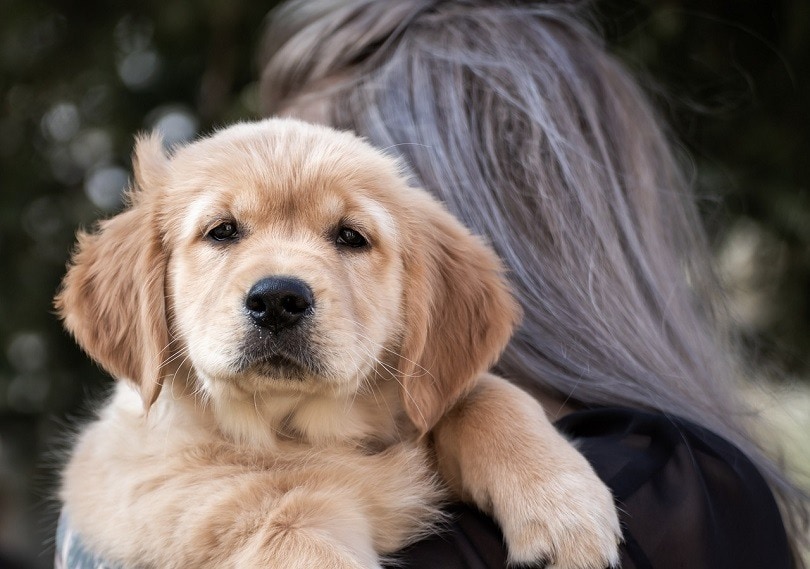 The Golden Pyrenees is a pup with a lot of energy and love beneath its large and fluffy exterior. This dog is a cross between a Golden Retriever and a Great Pyrenees, this second parent being the reason its size is no surprise.

Golden Pyrenees appear to be designer dogs, majestic and elegant, especially as they grow into their personality. Due to the dog’s overall size and energy needs, the Golden Pyrenees are not advisable dogs to have in an apartment. They need the space to get their exercise for a fit and longer-lasting life.

This pooch has the sweet and loyal heart of a Golden Retriever and the size and strength of the Great Pyrenees. This mix is what makes it an excellent fit for watchdog duties and families with kids. Since it requires such an active lifestyle, runners, hikers, or bikers may appreciate the new workout buddy, keeping them and the dog in fit shape for a healthy life.

Golden Pyrenees Puppies – Before You Welcome One Into Your Family..

1.  They have strong mothering-type instincts.

Combining the traits of the two breeds that are the parents for the Golden Pyrenees equals a very loving and attentive dog.

The Great Pyrenees were initially bred to be a shepherd’s dog, watching over the sheep at night when the shepherds slept. The dog practiced extreme care and loyalty for the flock and was aggressive towards suspected dangers. This trait often carries over in families with children.

2.  They are better suited for colder environments.

The Great Pyrenees was a European mountain dog, and throughout decades of genetic preferences, they grew thick and long coats meant for protection in high altitudes and cold temperatures.

This preference doesn’t mean that the Golden Pyrenees cannot live in warmer climates. The dog should be kept cool, though, especially during hot periods of the year. It is especially given to overheating and even heat stroke if left in warm conditions for long periods. Getting the dog blown out every spring is another fitting way to keep it cool.

3.  They need extra grooming to keep them looking silky and golden.

The short, soft undercoat combined with the long, straight hair on the outer coat tends towards matting. The hair initially helped to protect the two dog breeds, helping to control their interior temperature. It does shed quite a lot, especially during spring and early summer.

The Golden Pyrenees requires more grooming than most, needing a brush every day to keep the coat looking healthy and golden.

Temperament & Intelligence of the Golden Pyrenees 🧠

The Golden Pyrenees come from two parents that are well known for high intelligence that is normally exhibited throughout the breed. It is good to keep in mind, though, that the actual traits of a new puppy are primarily determined by what it inherits from the parents’ personalities.

This mix makes for an odd possibility of expected traits. Golden Retrievers are generally outgoing, sometimes overly friendly with people and other animals. The purpose of the breed is to retrieve. These tendencies contrast the Great Pyrenees, meant to be a watchdog and stay wary of strangers and other animals.

The expectation for the Golden Pyrenees can typically be a cross, with the better characteristics winning out: enthusiastic and loving.

These dogs are quite intelligent and have large personalities. This can be a lovable feature, but it also makes them more challenging to train than other more obedient breeds. They are infamous for the habit of “selective deafness.” This means they choose to ignore a well-known command, not out of stupidity, but because of stubbornness and high distractibility.

These tendencies make the dog a better match for owners that are well-versed trainers or have a lot of determination.

When it comes to having this bulky pooch around the kids, it needs to be watched due to its lack of understanding of its size. They like to believe they are lap dogs and may accidentally knock over very young children because of its sheer size.

The Golden Pyrenees has a temperament that makes it an almost perfect fit for families. It is very loyal and loving and will often protect its small companions if it feels danger approaching. It is not always the best fit for families with very young kids since it is so large. It would never do anything to harm a child purposefully, but may accidentally due to its sheer size.

This breed has been known to its loving nature towards everything, other dogs, any humans, and even cats. They have a very playful nature. Get them accustomed to strangers and other animals as young as possible to train them into being an approachable dog and agreeable with other animals in their space.

Things to Know When Owning a Golden Pyrenees:

They exhibit large appetites to suit their massive musculature and usually need four to five cups daily. Their food should be of high quality but can be a general kibble.

Since this breed is genetically accustomed to cold temperatures and a high level of activity, they gain weight quickly without the right care. Watch them to make sure they avoid overeating and stay in the best shape for a long healthy life.

The Golden Pyrenees is a dog that requires a high amount of activity each day to keep it as healthy as it should be. On average, the dog should get around 120 minutes of activity per day. It isn’t expected of the owner to take them out for this long of combined exercise per day. This is why they are generally not suitable for apartment living, as having a yard or acreage to roam around in will supply them with the bulk of their needed activity.

It is recommended that an owner be prepared to walk an average of nine miles with them each week to keep them fit.

The Golden Pyrenees normally retain the pack mentality from their Great Pyrenees parents. In order to train them well, they need a strong pack leader they can respect. The first part of training is convincing them that you are the pack leader and not them. They need a firm, calm owner to work with them.

One thing to watch out for with Great Pyrenees Golden Retriever Mix in training is inconsistency.  If more than one person is working with the dog, be sure that everyone agrees on the training protocol. The dog is highly independent and won’t be bothered if there are inconsistencies or weaknesses shown in the trainers. Some owners rely on the expertise of a professional to guarantee a solid training regimen.

Great Pyrenees Golden Retriever Mixes are grouped as a high-shedding dog, not suitable for those looking for a dog whose coat is low maintenance. They need to be brushed every day, even more during the seasons such as late spring and early summer, as the temperature increases.

Golden Pyrenees may develop a doggie odor if they are not kept properly groomed. Although brushing them out frequently may help, it is also a good idea to give them a bath whenever the odor begins to develop.

The best tools to use for the coat of this particular dog is a pin brush, a comb, and a deshedder to release the undercoat and keep them cool during warm months.

Due to the dog being a crossbreed of pedigree or full blood pups, the Golden Pyrenees may inherit some of the adverse health conditions that are common in either breed.

Great Pyrenees often struggle with bloating, although proper exercise and a healthy diet help alleviate this stress. They also suffer from hip dysplasia, luxated patellas, as well as bone cancer. Any of these may carry down the line to the Golden Pyrenees puppies.

Golden Retrievers may develop problems such as other cancers, congenital eye defects, Von Willebrand’s disease, numerous other heart problems, and share the health defect of hip dysplasia. This is not a guarantee that a Golden Pyrenees will suffer from these, but the owner should learn about and watch for early indicators.

Lastly, due to their thick fur coats, Golden Pyrenees may struggle with skin irritants and other problems. This especially applies to humid areas around the world.

There are not highly noticeable differences between the male and female counterparts of the Golden Pyrenees. They both share the same overall traits of the breed, being typically loving, independent, and loyal dogs.

The rest of the differences between the genders are more subtle and may not carry through each Great Pyrenees Golden Retriever Mix.

Male Golden Pyrenees are often more attentive, never wanting to be left alone, and always feeling the need to be highly incorporated into his pack. He often chooses a favorite, generally the “master” or trainer of the dog.

Female Golden Pyrenees are often a little shyer than male dogs, not feeling the need to impress dominant traits upon others in the home. She doesn’t always feel the need to be included and may exhibit fewer jealous tendencies because of this.

The Golden Pyrenees is a perfect fit for those people that don’t mind a dog that is high maintenance in return for a lot of love and engagement. Trained the right way, they are a perfect dog for a home that needs a guard while simultaneously being able to be gentle with strangers when directed.

The breed is also a good fit for those that are looking for a lifestyle buddy, easily able to climb up mountains, go for a run, or be a long walker’s friend. A Golden Pyrenees is better suited for life in a space larger than an apartment.

The mix of the Great Pyrenees and the Golden Retriever found success in this special breed, inheriting the better characteristics from both lines. This dog is large enough to fill a space with love and laughs and is still just as good at cuddling and calming.