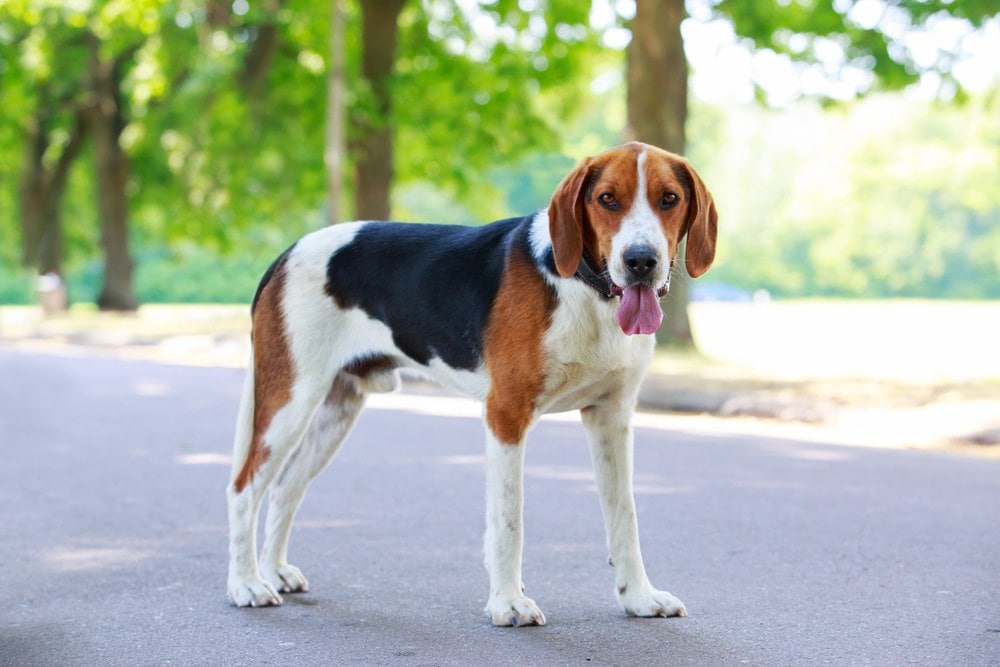 It’s likely that you’ve never met a Harrier before, unless, of course, you’re in the hunting business. So, if we said to you, this guy is like the Beagle, but his bigger brother with extra muscles, you can get an easy idea about what you can expect from him. Unless, of course, you’ve never met a Beagle, then we’d ask which rock you’ve been hiding under!

The Harrier is a medium to large-sized dog with intense energy levels, and it’s safe to say that this guy is only suited to an active family. He also needs a family that can spend most of their time with him, because he’ll get bored quickly if you leave him for too long. Resulting in damaged furniture and unhappy neighbors who cannot take any more howling.

If you can provide these two main asks of his, you should get on like a house on fire. This breed guide is an essential tool for anyone looking to invite a Harrier into their lives. So, let’s find out everything you need to know.

Harrier Puppies – Before You Get One…

Firstly, you need to know that the Harrier is like a Beagle, but on super steroids. If that doesn’t give you a clue as to how intensely energetic he is, we don’t know what will. This pup is not suited to your average family because not all families have the time or the energy to give to him.

Have you got the time to give him? We would suggest that you already have the spare time for him instead of making room in an already hectic schedule. He needs a lot, and it would be more like a lifestyle change.

As you can expect, he has an incredibly high prey drive, and as such, you cannot let this pooch off-leash. No amount of teaching will train this out of him. So, if you’re hoping for a fully obedient pooch who will stick by your side off-leash, you need to consider another breed altogether. Ideally, he should be adopted by a family with experience in dog ownership and training.

They also have two habits that some owners find annoying. The first is howling, and the other is digging. If you have noise-sensitive neighbors or precious lawns, you might want to consider another dog breed. Thankfully, these habits usually present themselves when they are overly bored, which is another reason to ensure that they get their much-needed exercise.

2. The Harrier’s true origins are unknown.

It is thought that there are more theories about this guy’s breed origins than there are American states. The most agreed upon is that he came from England, likely in the 13th century and that his name, Harrier, comes from the word Hare. He has a love/hate relationship with Hares.

3. The Harrier is one of the rarest dog breeds in America.

In 2020, he is ranked by the American Kennel Club (AKC) as the 189th most popular dog breed of 196 breeds. This is despite being recognized by the AKC in 1885. This is likely because he is a hunting dog with intense energy levels, most of which the average family doesn’t have time for.

Temperament & Intelligence of the Harrier 🧠

Aside from his traits mentioned above, the Harrier makes a wonderful family pet for the select few families out there. Not only does he adore his master, but he is also full to the brim with love and affection for his family. He loves to snuggle in the evening after a long day hunting or exercising. This snuggle bug makes a great hot water bottle if that’s what you are looking for.

He also gets along well with all family members, from children all the way up to grandma. He is respectful, and despite his active demeanor, he is calm in the home and knows when to be on his best behavior.

He is a natural pack animal and prefers to be with his humans or another dog. Leaving this guy alone for too long is a big no-no. But, this is great if you are a sociable family who spends lots of time at home with friends and outside the family. He welcomes all with open paws and has no qualms mingling and making friends.

As long as you can meet his needs described above, this guy is suited to family life. Not only can he live with young children, but he will also accept visitors and strangers alike. He is also a versatile dog, so if you are expecting a new human addition to the family, you have nothing to worry about when it comes to the Harrier accepting them into the fold.

This is dependant on what type of pet you have. If it is another dog, as long as he is socialized well as a pup, he will appreciate canine companionship. In fact, if he is an only pet, you might find he is a bit sad without another four-legged bestie in the house.

But, if you have cats or rodents in the house, this guy will not blend in well. His high prey drive means that if it is smaller than him and isn’t a dog, he will see it as a challenge to hunt and catch. So, if you have anything other than a dog or you might in the future, the Harrier should not be your dog breed choice.

Things to Know When Owning a Harrier:

Now that you know about his personality and must-haves from his soon-to-be family, here are a few of his day-to-day needs.

The Harrier needs approximately two cups of high-quality food every day. His food needs to be able to provide him with the energy he needs to sustain him. It also needs to provide him with healthy carbohydrates, fiber, vitamins, minerals, and probiotic ingredients to assist his digestive system.

The Harrier, just like the Beagle, is prone to obesity. This guy would do anything for a snack, and he would also steal anything of the counter or from the cupboards if you forget to lock it up. For this reason, you need to be vigilant when it comes to locking food away, for both his weight and his safety.

Just in case you missed it, the Harrier needs a lot of exercise. You need to set aside between 90 and 120 minutes every single day to keep this guy happy and healthy. Come rain or shine, there are no excuses with the Harrier around.

Because of his high prey drive, we advise that you do not let him off-leash. Because he is a pack animal, he would appreciate a regular trip to a local doggy park as long as he socialized well. Just make sure that it is secured and that he cannot run-off if he catches a scent.

He is also a very intelligent dog breed, meaning that you need to vary his exercise activities to keep him interested. If he becomes bored with his routine, or you, for that matter, he will exhibit problematic and unruly behaviors.

The Harrier needs to be socialized as a pup, no matter how much of a pack animal he is. Mix him with other dogs and humans as much as possible, and expose him to new environments and sounds as much as you can. This will help him to grow into a polite pooch, as well as improve his etiquette too.

Obedience training is also essential because this will enforce your bond with him. Although he will always choose his nostrils over your commands, you should be the next closest thing.

The Harrier is a natural hunting dog, but again, he still needs guidance on what commands you want him to learn. If you are looking to train this guy to his full hunting potential, speak with your breeder. They will be able to offer you guidance and contacts in the Harrier hunting field.

Positive reinforcement training is the best way to train the Harrier. His preferred reward will likely be a Scooby snack, or three because of his love for food and snacks. Just remember that he is prone to quick weight gain, so use them in moderation.

The Harrier has a straightforward grooming schedule, which is just as well considering how much you will spend exercising and playing with him. His short coat only needs a brush once a week to remove dead hairs and to spread his natural coat oils around to keep him looking healthy and shiny.

He also has long drop-down ears, which act as a breeding ground for bacteria. This means that you will need to clean his ears at least once a week, maybe more, to prevent the buildup of wax and bacteria.

He will only need bathing once every three months. He is likely to get mucky on his adventures, and if he does, hose him down with water only to remove the mud and dirt if you need to. He is a generally hygienic pooch who takes pride in his appearance.

The Harrier is a very healthy dog who enjoys a lifespan of 12 to 15 years. Just like all purebred dog breeds, he suffers from certain health conditions more than others. If you are about to welcome this beautiful boy into your life, it’s essential to learn about the below health concerns and their associated symptoms.

The size between male and female Harriers is the most significant difference between the sexes. Males tend to be the largest on both the height and weight scale. Other than this, their personality is all dependant on his upbringing, training, exercise routine, and family environment.

The Harrier is a rare dog breed in America, but only because of his extreme exercise needs. If it wasn’t for this, we would expect him to be much more popular as a family pet, considering how sweet and friendly he is.

You need to remember that you aren’t going to be the best fit unless you work him as a hunting dog or have a spare couple of hours every day. He is an intense pooch to own, but not overly demanding once his exercise needs are met.

He’ll happily sit back and relax, happy in the knowledge that you love him and that you are within paws reach. If you can give him everything he needs, he will return the favor in lots of love and doggy companionship.