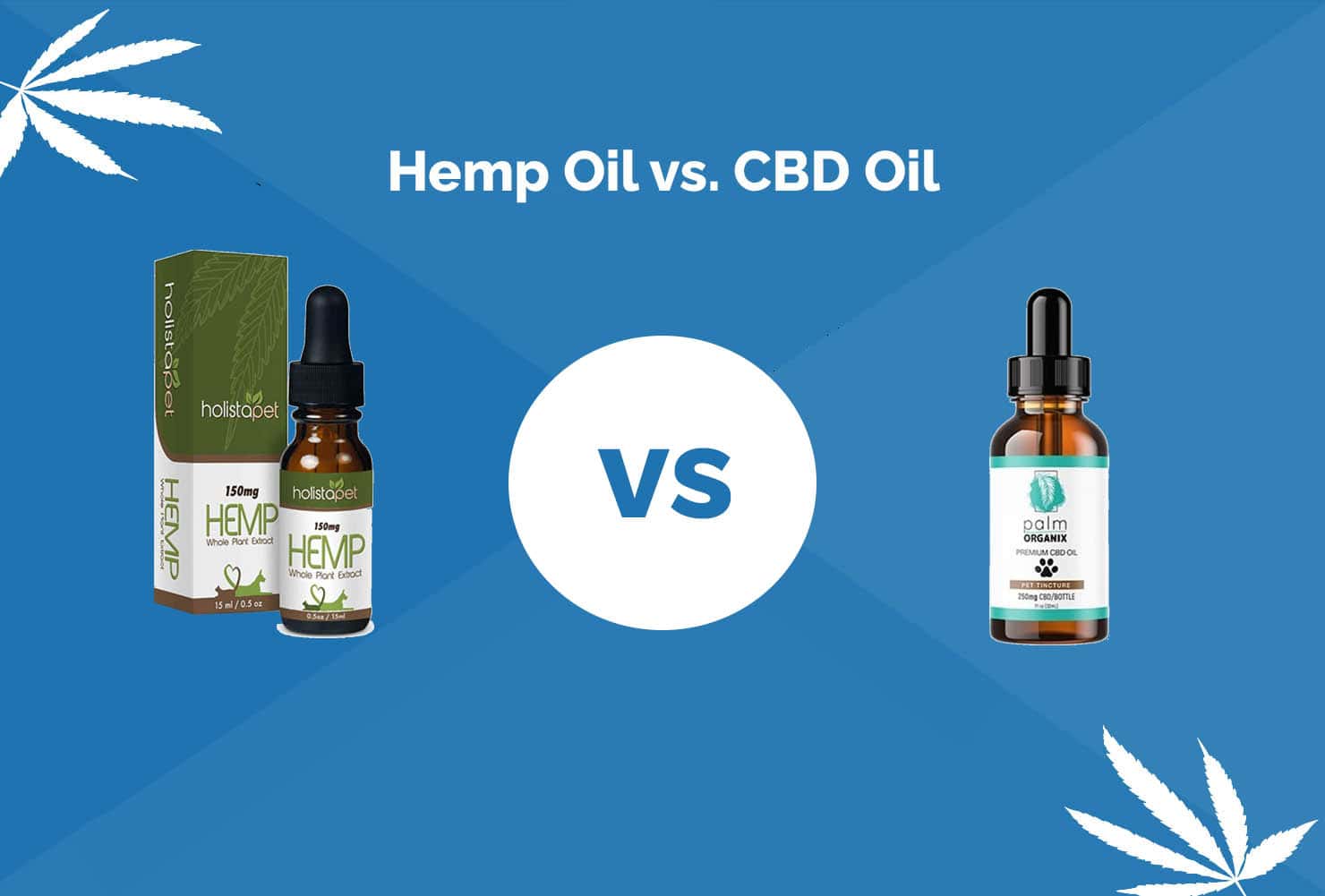 If you’ve been keeping up with trends in pet health, then you’re probably already aware that hemp and CBD oils are some of the hottest products right now.

These products have been claimed to do everything from calming an anxious pup to helping older dogs with joint and mobility issues. However, if you’re not familiar with them or how they work, it’s easy to get confused when deciding which to buy.

The biggest question, of course, is whether there’s a difference between hemp oil and CBD oil, and if so, what that difference is.

In this brief guide, we’ll give you an overview of both products, so you can decide which one to purchase for your pup.

What’s the Difference Between Hemp Oil and CBD Oil?

Both products are derived from the hemp plant, so it’s easy to assume that they’re the same thing. That assumption would be erroneous, however.

Hemp oil is usually made from hemp seeds, whereas CBD oil is made from the rest of the plant (the flowers, stalks, and leaves).

While they both come from the same plant, they have different properties and are best used for different things.

Generally speaking, hemp oil is more of a nutritional supplement, as it’s loaded with important antioxidants. CBD oil, on the other hand, is used for medicinal purposes.

It’s important to note that many online platforms (such as Amazon) don’t allow the sale of CBD oil, so you may find manufacturers selling CBD oil but labeling it as hemp oil. Always check the label to see where the oil came from so you know for sure what you’re getting.

The Importance of Cannabinoids

Cannabinoids are compounds that are found in the Cannabis sativa plant. The most well-known cannabinoid is THC, which is responsible for the psychoactive effects triggered by marijuana use.

THC isn’t found in either hemp or CBD oil, so you don’t have to worry about your dog getting stoned. However, there are 65 other cannabinoids found in hemp, including one known as cannabidiol, or CBD.

All vertebrates have receptors throughout their bodies for producing and receiving cannabinoids. Many are found in the brain, where they help with memory and motor functions, while others boost your immune system and the production of bone marrow cells.

When you ingest cannabinoids, they can inhibit the release of neurotransmitters responsible for releasing certain chemicals, such as stress hormones or pain signals. This is why cannabinoids like CBD are now being explored for their abilities to treat pain and other issues in pets and humans alike.

Cannabinoids are only found in the resin of the plant, so you won’t find it in the seeds; it’s only present in the stalk, leaves, and flowers. As a result, this makes hemp oil and CBD oil extremely different in how they interact with your body.

While hemp oil may not offer any of the major medicinal benefits that CBD oil is famous for, that doesn’t mean it’s without merit on its own. In fact, it’s one of the most antioxidant-rich substances on the planet.

Hemp oil is chock-full of omega fatty acids, which can be used for everything from improving brain function to fighting off inflammation. If you’ve ever heard that fish is good for you, it’s largely due to the omega fatty acids, and hemp oil has them in spades.

As a result, hemp oil may be able to help with certain medical issues, such as skin conditions, arthritis, and lowering cholesterol, but its effects are going to be less visible and dramatic than those you’d find with CBD oil.

That being said, hemp oil will make your dog healthier overall, which is never a bad thing. There aren’t really any downsides to giving your dog hemp oil, but it’s important to know that you won’t see an immediate difference like you would with cannabinoid-rich CBD oil.

When Should You Give Your Dog Hemp Oil?

There’s really no bad time to start giving your dog hemp oil; dogs of any age will benefit from the antioxidant-rich oil.

Younger puppies can benefit from it, as omega fatty acids are important for proper brain and eye development. It will also help their immune systems become as powerful as possible.

If you’re giving it to an adult dog, treat it as more of a preventative measure than anything else. Hemp oil can stave off issues like heart disease and dementia, so you can’t go wrong adding it to your dog’s chow.

Once your pup becomes a senior animal, hemp oil becomes even more important for keeping their brain, heart, and immune system functioning properly. The anti-inflammatory properties will be helpful too, but you may still need to give your dog a pain reliever as well.

When you hear about the powerful medicinal properties of hemp, what you’re actually hearing about is CBD oil. It’s absolutely full of cannabinoids, and as such, it can help with a wide variety of health issues.

The primary issues that CBD oil is marketed toward are a dog’s anxiety, such as when their owner leaves home or fireworks start popping off nearby, and joint and muscle pain. However, CBD oil has also been rumored to help conditions like:

It’s important to note, however, that much of the data behind these claims is anecdotal or based on studies performed on humans rather than dogs. There simply haven’t been many reputable studies done on how CBD oil affects dogs.

When Should You Give Your Dog CBD Oil?

As with hemp oil, there aren’t really any downsides to giving your pup CBD oil. However, most experts would recommend against giving it to your dog unless they truly need it.

For other health issues, you should start giving your dog CBD oil as soon as you notice the issue arise. For certain conditions, you can stop administering the oil once it clears up, but others will require continual dosing to prevent the issue from flaring up again.

You should realize that the effects of CBD oil are cumulative, so the longer that you give it to your pup, the better the results will be. For some conditions, like joint pain, you may not see results for 2-4 weeks, so it’s important not to give up after a few days.

In addition to hemp oil, these snacks also have glucosamine and turmeric, giving your dog a potent cocktail of joint-boosting nutrients. Most dogs seem to love the taste as well, so it’s easy to convince your pup to take their medicine.

PalmOrganix’s CBD oil is easily absorbed, as it contains flaxseed oil and sweet potato powder. It’s also lab-tested to ensure that it’s completely free of pesticides, mold, and other unwanted additives. It’s one of the purest, highest-quality CBD oils that you’ll find anywhere.

If you’re looking for an effective, all-natural way to boost your dog’s health or provide them with relief from certain conditions, then both hemp oil and CBD oil are excellent options and worthy of your consideration.

They’re not identical, though. Hemp oil is more of a nutritional supplement, whereas CBD oil is a medicinal product designed to treat a variety of health issues. You may want to give your dog hemp oil for the duration of their lives, whereas CBD oil should only be used on an as-needed basis.

Regardless of which one you choose (or if you choose to use both), hemp oil and CBD oil are both useful alternatives to traditional, chemical-based medicines. If you’re looking for a new way to help your dog deal with their medical issues, both are worth investigating.

Bravecto vs Seresto: Which Flea & Tick Treatment Is Better?