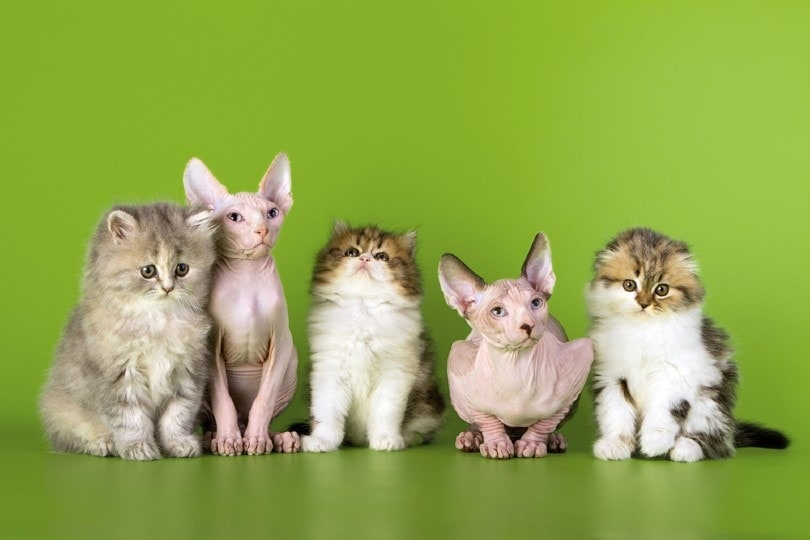 Whenever someone sees a cat, it’s not uncommon for them to say, “Aww, look at the cute orange cat!” Or even, “Oh look! A calico cat!.” After all, we typically identify cats by their color patterns instead of a specific breed. The problem with this is that certain colors and patterns can be found across many different cat breeds.

Unlike dogs, which can be easy to identify the specific breed (Chihuahua, Husky, German Shepherd, etc.), cats aren’t that easy to identify other than one or two breeds (Persian or Siamese, maybe). Although there aren’t nearly as many cat breeds as there are dog breeds, knowing what breed your cat is can help you learn everything there is to know about him.

Depending on who you ask, there are between 45 and 73 recognized cat breeds in the world.

In this article, you’ll learn exactly how many cat breeds there are, in addition to which breeds are more common than others. You’ll also learn some ways to identify the breed of your cat so that you can learn a bit more about the breed’s history and characteristics.

How Many Cat Breeds Are There Worldwide?

Before we answer this question there are three things that we need to explain. The first is that in answering this question, we are only talking about domesticated cats; that means cats that are typically kept as pets.

The second thing that we need to explain is that when we talk about recognized cat breeds, most of them are going to be considered pedigreed cats. What’s the difference between a pedigreed and a non-pedigreed cat?

The third thing that we need to explain is that when it comes to determining how many domesticated cat breeds there are worldwide, it just depends on who you ask. There are a few organizations out there that determine how many cat breeds there are, and that can’t seem to agree on a number.

Part of this likely has to do with the fact that there are so many non-pedigreed cats out there that have characteristics of more than one breed. But there are also attempts to cross specific breeds of cats to make a new breed, which can result in discrepancies in numbers.

The Cat Fanciers’ Association (CFA) is one of the most trusted organizations when it comes to our feline friends. They recognize 45 pedigreed cat breeds. But they also acknowledge that around 95% of cats that are kept as pets are non-pedigreed, so it is very possible that there are more than 45 breeds.

The Fédération Internationale Féline (FIFe) recognizes 48 pedigreed cat breeds. They are a similar organization to the CFA and recognize most of the same breeds. However, the FIFe lists some breed variations separately, even if they have almost identical characteristics as another breed.

For example, some consider the Cymric to be a Manx cat with a longer fur length. The breed standard for the two is also the same. But despite having similar characteristics, due to differing claims surrounding the origins of the two breeds, they are listed separately by the FIFe.

Finally, we have The International Cat Association (TICA) that recognizes 73 different breeds of cats. They have the largest registry by far regarding how many pedigreed cat breeds they recognize. A lot of the difference in numbers between TICA and other organizations is a result of them recognizing long-haired and short-haired varieties of the same breed separately.

TICA also recognizes non-pedigreed household cats into a class of their own when it comes to competing in TICA-sponsored shows. Also included in their registry are newer breeds that are still being developed, such as the Serengeti cat and the Highlander cat.

Can New Cat Breeds Be Added to the Registry?

New cat breeds are being developed that are added to registries as a result. Usually, these breeds are experimental breeds or hybrid breeds that are created as a result of breeding two different pedigreed cats to create a cat with certain features.

For example, the Serengeti cat is a relatively newer breed that is a cross between a Bengal and an Oriental cat. It has been around since 1995. TICA recognizes this cat as an “Advanced New Breed,” but the CFA still doesn’t recognize it at all.

Adding a new cat breed to a registry doesn’t happen as a result of simply creating one cat of a specific new breed. Each organization has different requirements as far as what must happen for a new breed to be added to its registry. Requirements usually consist of how long the breed has been around, how many breeders are breeding this particular cat, how many cats are participating in shows, etc.

Anytime a new breed is added, it takes a lot of time and research to figure out things such as the breed’s origin and bloodlines. And most registries aren’t going to add a new cat breed when there are only a few of that breed in existence. It can take several years and even decades before a new cat is added to a registry.

But as previously mentioned this is one of the reasons for discrepancies in the number of recognized cat breeds that there are. Plus, there are likely many breeds in existence that aren’t yet recognized. It’s entirely possible that the total number of cat breeds could be closer to 100.

What Are the Most Popular Cat Breeds?

As far as recognized pedigreed cat breeds, some of the most popular breeds include the Maine Coon, Ragdoll, and Persian breeds. The exact popularity ranking of these cats varies around the world, but these are just a few of the most commonly owned and registered cats.

According to the CFA, Ragdoll cats were their most popular breed in 2020, followed by Exotics and Maine Coons. The Persian cat, one of the most popular worldwide, finished fourth on their list. Other popular breeds include both British and American Shorthairs.

Both Domestic Shorthairs and Domestic Longhairs are non-pedigreed cat “breeds” that are described by the length of their fur. They actually aren’t specific breeds at all, rather they are mixed-breed cats whose actual genetics and ancestry are unknown. If you take in a cat as a stray or adopt one from the animal shelter, it will more than likely be one of these two varieties.

How Can I Tell What Breed My Cat Is?

Unless you have a purebred cat, it can be hard to determine what breed it is. If your cat is not purebred, it is most likely a Domestic Shorthair or Domestic Longhair. In some cases, you may be able to look at your cat and pick out certain features of individual cat breeds, such as coat color, ear shape, tail appearance, etc.

You can always research these features on the Internet to find out which breeds your cat shares a resemblance to. But here’s the kicker: some features span multiple cat breeds so it can be hard to know for sure.

If you really want to know what breeds make up your domestic cat, the best way to do so is with a cat DNA test. You can purchase a kit online, in which you collect your cat’s DNA (usually through a cheek swab), then send the test back to the read and receive your results. Or, you can have a veterinarian perform a DNA test on your cat as well.

Other than the easily recognizable Persians, Siamese, Maine Coons, and Sphynx cats, many cat breeds aren’t as universally recognized as dog breeds are. We know that there are between 40 and 75 recognized cats breeds, but there are likely many more as well that are still being developed or are unrecognized.

What’s more, many household domestic cats are a mix of several different cat breeds with a long line of ancestral mystery. They may exhibit characteristics of many different breeds. But if you really want to know your cat’s breed history, you can always have a DNA test performed in order to get to know your feline friend a little bit better.

Are There Wild Cats in Oregon?

Can Cats Eat Daisies? Are They Toxic to Cats?

Can Cats Eat Barley? What You Need to Know!