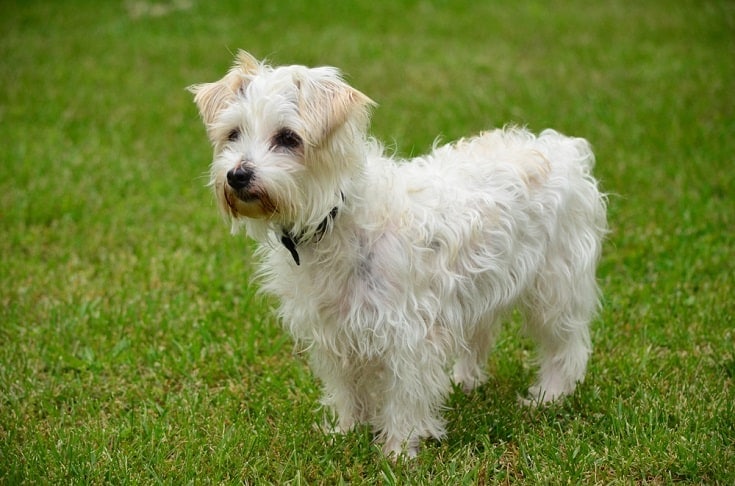 The Jack-A-Poo Create created by blending the Jack Russell with a Miniature Poodle. This dog also goes by many other names, including Jackadoodle, Jackapoodle, Jackpoo, and Poojack. It’s believed to originate in the United States in the 1980s or 90s, but little information other than that exists. It can vary quite a bit in appearance. It can look like either parent or a mix of the two.

Jack-A-Poos usually have a muscular body with the strength to jump high in the air. They have an alert, inquisitive expression, oval eyes that are almond color, and medium length ears that fold over. It will also likely have a long tail round feet.

Jack-A-Poo Puppies – What You Should Know Before You Buy…

3 Little-Known Facts About the Jack-A-Poo

2. The Poodle parent is one of the most intelligent dog breeds.

3. The poodle pan is a water retriever and has a remarkable swimming ability.

Temperament & Intelligence of the Jack-A-Poo 🧠

Most owners described the Jack-A-Poo as gentle, loving, affectionate, cheerful, energetic, loyal, and playful. It gets along well with all family members, especially if it receives plenty of early socialization. It’s wary of strangers and likes to wander off, so you’ll want to purchase a leash.

The Jack-A-Poo gets all its intelligence from its Poodle parents. It’s quick to pick up new tricks, learn the family routine, and learn new ways to get what it wants. Their high intelligence makes them great watchdogs. It can often determine friend from foe without help and know when it’s time to wake you up due to an intruder or other emergency.

The Jack-A-Poo makes a great family pet because it’s not very big and is smart enough to play games and entertain the children. It usually chooses to hang out near family members and like to be included in any family functions. Its excellent watchdog skills will keep your family safe.

The Jack-A-Poo Girls get along with most other animals, but early socialization will help lock out any bad behavior before it begins. The Jack Russell in your dog will find it hard to resist chasing birds’ other animals it finds in your yard, but they will often get along with your household pets much better.

Things to Know When Owning a Jack-A-Poo

In this section, we’ll discuss some things you may not have yet considered.

The Jack-A-Poo is a smaller size dog, but it’s very active, so it may require more food than you think it would. You can expect to feed your pet up to a cup of dog food each day spread out over several meals. We recommend a dry dog food with high-quality protein listed as its top ingredient.  We also recommend foods that contain antioxidants and omega fats.

The Jack-A-Poo Is an active dog that will require 40 to 60 minutes of moderately intense exercise every day. You can achieve this exercise by playing catch we’re going for walks. If you are a jogger, they might like to run with you, and in many cases, children can help your pet get the exercise it needs. You may also find that your Jack-A-Poo likes to take the occasional swim and that it’s quite good and making its way through the water. Swimming is a great way to burn off excess energy.

Training a Jack-A-Poo is very easy due to the intelligence of its Poodle parent. The Jack-A-Poo is also eager to please and will enjoy learning new tricks to satisfy their master. There are many tricks you can teach them, and the key to keeping them interested is to use positive reinforcement. Positive reinforcement means to shower your pet with praise and offer treats when they successfully follow one of your commands. As they get better at following your commands, you can reduce the number of treats you give out to prevent weight gain. Holding your training sessions at the same time each day is also a critical component of a successful training session.

The grooming shouldn’t be too bad with this breed. You will need to brush then about once a week with a stiff-bristled brush to remove any tangles and debris that may have become trapped in the fur. Since their ears are floppy, you will also need to clean them often to reduce the risk of ear infections due to moisture and wax build-up. You will also need to trim the nails about once a month, or when you hear them clicking on the floor when they walk.

Mixed breeds like the Jack-A-Poo usually have fewer health issues than their purebred parents, but we’ll list some of the common problems that still occur in this section.

The Jack-A-Poo makes a great family pet as well as an affectionate companion. It likes to play games, learn new tricks, and watch over the house. It may chase some smaller animals around the yard, but the Jack-A-Poo usually gets along well with family pets, especially if they receive early socialization.

We hope you have enjoyed reading our look into the Jack-A-Poo breed and found something you like. If we have helped you find your next pet, please share this Jack-A-Poo Complete guide on Facebook and Twitter.