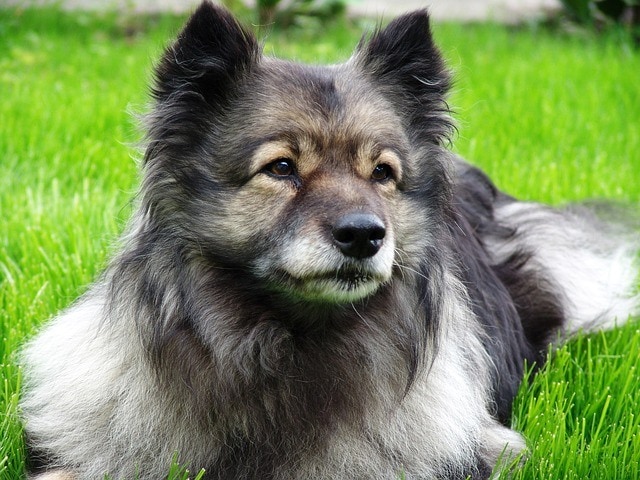 The Keeshond (pronounced “kayz-hawnd”) is a medium-sized purebred dog that was originally developed in Holland during the Middle Ages. They descend from the same ancient stock as other Spitz-type dogs, including the Finnish Spitz, Samoyed, and Pomeranian.

Keeshonden were originally used as barge dogs and served their owners as both companions and guard dogs as they traveled the canals and inland waterways of Europe. Today, they are popular family pets and companion dogs.

The American Kennel Club recognizes the Keeshond as a breed, and their parent club in the United States is the Keeshond Club of America.

Keeshond Puppies – Before You Welcome One Into Your Family

Provided that they get out for a walk and a good run each day, the Keeshond is well suited to life in either a house with a yard or apartment living. They make great watchdogs and will bark whenever anybody approaches your door or attempts to enter your property.

Keeshonden are quite active dogs and need plenty of exercise and mental stimulation. If left alone for long periods, these dogs will get bored and become quite destructive.

1. The Keeshond has a history of involvement in Dutch politics.

In the 18th century, the Keeshond became the symbol of the Dutch Patriots Party in its opposition to the royal House of Orange and is still a symbol of Dutch patriotism to this day.

2. There is considerable debate about the origins of the Keeshond name.

The two different theories about the origin of the Keeshond name have been the subject of much debate over the years. The first theory is that the name “Kees” refers to a well-known Dutch Patriots Party mascot dog known by that name, while the second theory is that it refers to two different patriot leaders nicknamed “Kees.”

The exact origin of the name will likely be never known, but that hasn’t stopped people from debating the issue.

Thanks to the shadings and markings around their eyes, Keeshonden often look like they are wearing a pair of dark-rimmed designer glasses. This feature gives the breed an endearing alert and intelligent appearance.

Temperament & Intelligence of the Keeshond 🧠

The Keeshond has a lovely and friendly personality. They genuinely love being with people, and while wary of strangers, they will readily accept anybody whom their owner brings into the home.

Keeshonden make excellent family dogs. They love people and have a calm, accepting, and non-aggressive temperament that makes them perfect for families with children of any age. They will happily sit and watch over young children as they play or engage in a bit of rough and tumble with older kids in their yard.

Of course, as with all dogs, it still a good idea to keep an eye on them when they’re playing with children, but compared to many other breeds, Keeshonden are extremely good dogs for families with young children.

As a bonus, due to their long average lifespans, there is every chance that a Keeshond puppy that joins your family when you have young children will be a constant companion to your kids throughout their childhood.

Keeshonden were never bred to be a hunting dog, and as such, they do not have the same high prey drive as many other breeds. As a result, they tend to accept other dogs and pets within the home readily and will quickly make friends with any other furry member of your families.

Things to Know When Owning a Keeshond

When it comes to feeding your Keeshond, we recommend that you find a premium quality dry dog food that has been formulated for active medium dogs. Ideally, you should find a brand that has a range of age-specific formulas (puppy, adult, and senior), and you should transition your dog through these as appropriate throughout their life.

If you would prefer to provide your dog with home-prepared meals, it is always advisable to consult your veterinarian to ensure that the meals you plan to feed your pet will provide them with the correct nutritional balance to keep them fit and healthy.

Keeshonden have a habit of overeating if allowed to free feed. As such, you should only give them carefully portioned meals.

Keeshonden can adapt to many different living environments, from small inner-city apartments to boats and houses with large backyards. But regardless of where they live, Keeshonden need regular exercise and should be taken for a 30-45-minute walk every day. Alternatively, you may find that your Keeshond enjoys a visit to your local dog park, where they can run around off-leash for a while and spend time playing and socializing with other dogs.

The Keeshond is an intelligent dog that likes to please their owner, and as such, completing basic obedience training is not likely to be overly challenging. As with most dogs, Keeshonden respond best to positive reinforcement. You will have little trouble teaching your dog if you praise and reward them when they get things right, and simply ignore them when they behave inappropriately or get something wrong.

Once your Keeshond has mastered the basics of obedience training, you may find that they will enjoy more advanced obedience classes or dog sports such as agility. Not only is this a great way to provide them with additional exercise, but these activities are also excellent forms of mental stimulation.

The Keeshond has a long, thick double coat that sheds regularly and will need regular brushing to keep it looking its best. For most of the year, a weekly brush with a long pin brush will be sufficient to remove any loose hair.

Twice a year, once at the beginning of summer and again at the start of winter, Keeshonden blow, or shed, their undercoat. When this happens, they will need daily brushing to remove their blown undercoat from their thick, coarse outercoat. Alternatively, at these times, you may wish to engage the services of a professional dog groomer, who will be able to give them a complete de-molt.

The Keeshond is a generally healthy dog with an average lifespan of between 12-16 years.

As with most dogs, there are health conditions to which Keeshonden are susceptible. However, through careful and responsible breeding, most of these have been reduced in the breed, and with the aid of thorough health screening, they can mostly be avoided. Thus, before purchasing a puppy, it is important to ask to see the health reports for the parent dogs and have your breeder take you through the results and what they mean.

When it comes to choosing your new puppy, unless you have a particular preference for one gender over the other or you plan on breeding, picking your pet based on gender is not ideal.

In medium dogs like the Keeshond, there is little physical difference in terms of size and weight between male and female dogs, and any minor behavioral differences will be almost eliminated by spaying or neutering your dog.

Rather, you should consider the particular traits that you are looking for in a dog and discuss this with your breeder, who will be able to tell you, based on their observations of the puppies, which puppy in the litter will be most suited to you and your family.

The Keeshond is a fantastic breed if you are looking for a friendly, loyal, alert, and intelligent family pet or companion dog.

Keeshonden only require moderate amounts of exercise, have quite manageable grooming needs, and are generally easy dogs to look after and train. The only real issue you are likely to face is that the breed tends to bark frequently. However, with a little effort, this can be overcome, and you should have no real problem in teaching your dog when it is okay to bark and when it’s not.

Overall, it is hard to fault the Keeshond, and whether you are looking for an inner-city apartment dog or you live in the suburbs in a house with a yard, it may be well worth your time to have a closer look at this breed.