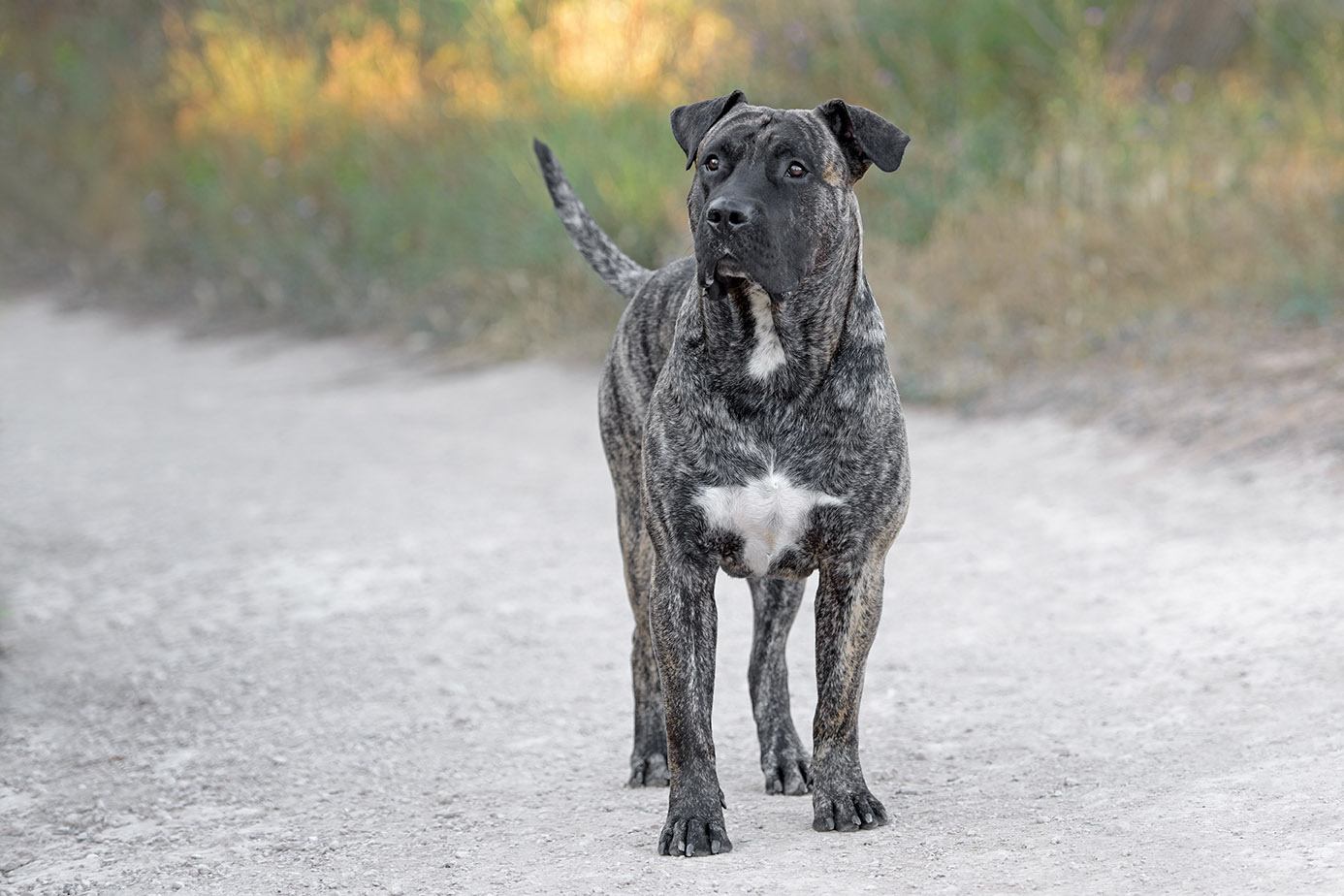 The Perro de Presa Canario (or Canary Mastiff) is the quintessential guard dog. They are big, strong, and deeply suspicious of strangers. They will not hesitate to protect their families with necessary force as need be.

This is why this dog is not for the faint of heart or anyone without the willpower and strength to guide this noble breed. We do not recommend this breed for families with smaller children based on their size alone. But when introduced at an early age to older children and even neighboring children, the Canary Mastiff will understand that those children are his family, and will do anything to protect them.

Before you run off to buy a Canary Mastiff, you need to first check to see if this breed has been banned in your country. That’s right. The Perro de Presa Canario has been banned in some countries worldwide; however, they are still allowed within the United States.

And their storied history has everything to do with it. They were originally used as cattle herding dogs and guard dogs on the Canary Islands due to their commanding presence and extreme awareness. Their job was simple: herd the cattle, guard the farm, and exterminate all threats.

But despite all that, they became known for their intelligence, fierce loyalty, and natural guardian attributes to their families. They were a courageous breed held in high esteem. However, a dog this majestic couldn’t be left to his duties. Some breeders wanted more and began breeding them for dogfighting.

And although dogfighting was officially banned on the Canary Islands in the 1940s, many breeders blatantly disregarded this law and continued to breed these once regal animals into a system of violence. Sadly, the Perro de Presa Canario had become nothing but a fighting dog. But that didn’t last either. With the advent of other dogfighting breeds such as the Doberman, German Shepherd, and Great Dane, the Canary Mastiff’s numbers dwindled, which led to the near-extinction of the breed.

Thankfully, there were kind and loving breeders that kept the dog’s noble heritage alive. They came together in 1982 and formed an alliance — an association — dedicated to restoring the dog’s reputation as a family-oriented watchdog. And as of today, the animal symbol of Gran Canaria remains the Perro de Presa Canario.

Purchasing and owning a Canary Mastiff is not cheap. The initial cost of a puppy is anywhere between $1,200-$3,000. And that’s one of the most inexpensive parts about owning a Perro de Presa Canario.

Their sheer size makes them a very expensive dog to feed, and you’ll need to keep them entertained as well. Buying toys designed specifically for dogs of this size can get pricey as well. One cheap option is to build your own dog toys for them. A couple of gallon milk jugs and some high-quality rope can make for some easy materials for providing your pup with hours of entertainment.

These dogs were actually mummified and buried with their masters in some funerary cults to help guide their owners to the afterlife.

2. They Are an Official Part of the Canary Islands Coat-of-Arms.

Two Canary Mastiffs are featured on the official coat of arms for the Canary Islands.

3. They Are Banned From Australia

Due to their checkered past, this breed is not allowed to be imported into Australia.

The Perro de Presa Canario is a mainly solemn dog. They’re always on alert for threats to their families, but that doesn’t mean they are immediately outwardly aggressive. They must truly be provoked into protector mode.

There’s a stigma that hovers around the Canary Mastiff just like the Pitbull — they are often assumed to be evil and aggressive. However, it’s all about how they were raised and the owner’s ability to establish themselves as a pack leader that will make the difference.

With the right training, these dogs are among the most dedicated and loyal dogs around. They might not be the most outwardly affectionate dogs, but they show their love through their dedication to their masters and families.

If properly raised, these can be great family pets — especially for those living out in the country and on farms. They’ll be even happier when given jobs to do as well, they are a working breed after all. And they’ll be loyal protectors for their entire family. We don’t necessarily recommend them for families with smaller children, however. Their immense size may accidentally cause some unintentional bumps and knocks.

If raised from a puppy with other pets or dogs, the Perro de Presa Canario will assimilate them into the family. And if they’re raised with proper guidance and social training, they will also fair well with other pets. However, they have extremely high prey and guardian spirit, so be sure not to leave them alone around other small animals if they haven’t been properly trained for it. If your Canary Mastiff wasn’t raised to be social, they may perceive other dogs as a threat, that’s why socialization from a young age is so important.

Things to Know When Owning a Perro de Presa Canario:

Owning a Perro de Presa is unlike owning most other dogs. There are some very serious considerations you must take account of when handling and caring for a dog of this nature.

If you couldn’t tell by looking, these dogs eat a lot. And regular dry food just isn’t going to cut it. A fully grown Canary Mastiff will require over 5 ½ cups of top quality dog food every single day. We recommend picking up a kibble such as Blue Buffalo Wilderness for Large Breeds.

We understand that this will be an expensive investment. However, if you’re truly wanting to provide the best for your Perro de Presa Canario, you’re going to have to spend a little bit of money.

There are many dogs of this size that don’t require a lot of dedicated exercise such as the St. Bernard or Newfoundland. However, the Canary Mastiff is not one of those dogs. They are a high energy breed that requires plenty of exercise and room to run. They do best within farm environments or large fenced-in yards with high fences.

You’ll need to dedicate at least an hour a day of active, intense play or cardio to get this dog his proper exercise.

When it comes to training considerations, you’ll need to start their training as soon as possible in order to prevent future mishaps. Thankfully though, this breed is very open to training and will learn very fast. They are exceptionally intelligent dogs and retain their training quite well.

It’s very imperative that the owner takes an active stance with training, as they must also be trained in how to be a proper master and pack leader. However, once this has been established, you’ll be hard-pressed to find any deeper bond between a Canary Mastiff and its owner.

Grooming the Perro de Presa Canario isn’t too difficult. As a matter of fact, it’s probably the simplest part of owning one. They aren’t heavy shedders at all and require only an occasional bath and brush.

The biggest area of concern for the Canary Mastiff as far as grooming is concerned is their ears. Being as large as they are, they develop a bunch of wax. And while they’ll try to dig it out on their own, they may need a little help. Keep their ears clean and infection-free, and they’ll thank you for it. Plus, it’ll give them an excuse to get a few scratches behind the ear.

The Canary Mastiff is a relatively healthy dog for its size. However, larger dogs often have more potential ailments than smaller breeds. And that’s exactly the case here.

They are prone to common doggie disorders such as hip dysplasia, osteoporosis, patellar luxation, and arthritis. However, the effects tend to be amplified based on their size. This can lead to a more painful late life.

The Perro de Presa is also more prone to other more serious ailments such as dilated cardiomyopathy (heart problems), epilepsy, demodectic mange, and more. However, staying up-to-date with veterinary checkups should help you keep a handle on things if ever your pup falls ill.

With this breed, you’ll see a definite size difference between some males and females. Males tend to be larger, heavier, and more brutish in appearance. Females have a tendency to be a bit more slight.

Owning a Perro de Presa Canario is a full-time responsibility and commitment. You’ll have to ensure that you take the time and put forth the effort in order to ensure they are properly raised. And just based on this pooch’s appearance, you’re going to encounter a lot of turned heads — many of which may be out of fear.

However, do not give them a reason to let that fear become a reality. A properly raised Canary Mastiff can be one of the best dogs any owner could ever ask for. You just need to give them the love they so desperately deserve.

The Canary Mastiff needs a good return back to its working roots and a clean separation from their stint as dogfighting machines. Just be sure that you’re ready yourself for this undertaking. It’s not going to be cheap, and it will be draining at times. But the reward is well worth it if you can make the sacrifice.