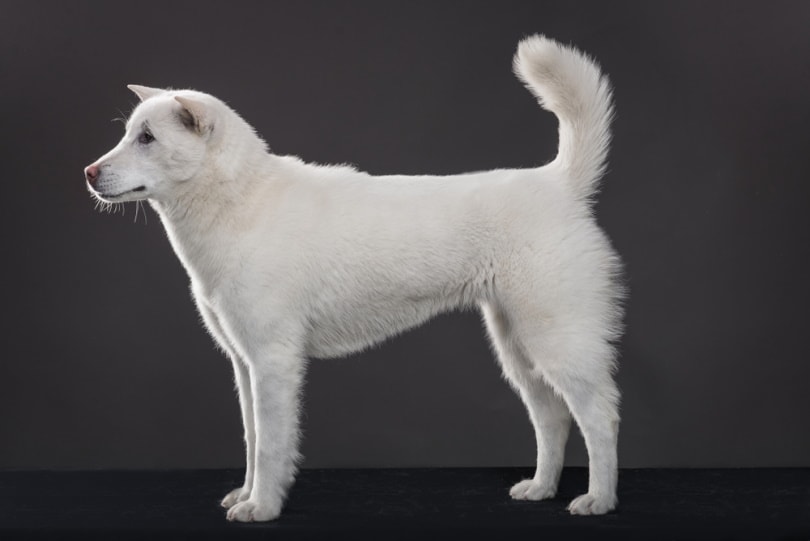 The Kishu Ken is a pup that makes an excellent choice for an active single or a family that engages in plenty of activity. These dogs are easy-going around the house and active when they are outside.

The Kishu Ken hails from Japan and looks similar to some of the other dogs from this region of the world, including the Shiba Inu, Hokkaido Ken, and the Akita Inu. Kishu Kens have deep brown eyes that are ever on the alert. Around their eyes, nose, and lips is all-black coloring, and they have a Spitz-shaped face.

Kishu Ken Puppy — Before You Buy

A post shared by Ai Kogane No Inu (@aikishuinu)

Since this dog originates from Japan, they are a rare breed. They have never seen a significant hike in popularity internationally. The Kishu Ken does stand apart from some other rare breeds in that they are relatively cheap. They cost between $300 and $500 on average.

Part of this cheap rate for a purebred dog is how rare they are. There are not that many breeders, which typically means they can increase their prices. However, they are also not well-known outside of Japan, so there is an incredibly low demand for them.

3 Little-Known Facts About the Kishu Ken

Most Japanese dogs do not have much of their history written down, so it cannot be known for sure when the Kishu Ken was developed. Researchers do believe that they date back at least 3,000 years, if not more.

The Kishu Ken, or Kishu Inu, since both “Ken” and “Inu” mean “dog” in Japan, is a tough animal. They are medium-sized dogs that used to roam the mountains throughout Japan for centuries.

Many years ago, Japan had what was called the Matagi. These were a group of winter hunters who ascribed to traditional hunting methods in the sacred mountains for bear, boar, and deer.

The Kishu Ken was one of the superb hunting dogs that accompanied the Matagi. Their job was to track the prey throughout the mountains and hold it in the area until the hunters could catch up. They preferred the Kishu because of their typical bright white colors. It made them much easier to see.

Nowadays, the Kishu Ken is still used for hunting wild boar throughout Japan. They have also become increasingly popular as pets in family homes.

2. The Kishu Ken is closely related to almost all other Japanese dogs.

All dogs that come from Japan were once considered to be the same breed. Even if they were more commonly interbred in some regions, they were still all considered the same dog. The only thing that separated them was their location and sometimes, their size.

For example, the Kishu Ken and Shikoku Ken are similar and come from regions quite close to each other. These dogs, although seen as separate breeds now, were commonly crossbred for many years.

The only dog that is the exception to this rule is the Hokkaido Ken. The dogs’ names are clues about where they come from, and the same is true with the Hokkaido Ken. They were kept separate only because they were from an island off the coast of mainland Japan. Interestingly, they look strikingly similar to mainland dogs.

3. The Kishu Ken was placed on the Japanese Protected Species list in 1934.

The Japanese are proud of their cultural history. This includes the dogs that were well integrated into almost every aspect of their lives. Therefore, it came as no surprise in 1934 that the Kishu was given the title of a “Memorial of Nature” in Japan.

The same year, the Japanese also placed them on the Protected Species list since they are scarce outside mainland Japan.

The reason for this is that the Kishu is difficult to export to other countries, partly because of Japan’s national pride in them. However, it does hurt their breed numbers and has led them to be a protected species.

Temperament & Intelligence of the Kishu Ken

One of the defining characteristics of the Kishu Ken is their extreme loyalty and devotion to their masters and the entire family. They can be somewhat aloof, though. Kishus are more accustomed to being used as a valued member of the family, working hard for their place rather than as a cuddle buddy.

These dogs are clean and intelligent, desiring their space to be in order. They are quiet and docile dogs, expressing their energy in long stretches of stamina instead of shorter bursts. They are not a barker and seem more like a cat in many ways than a dog. However, they have a strong will and are not recommended for a first-time dog owner.

Are Kishu Kens Good for Families?

These dogs can make a good dog for families. They tend to get along well with children, primarily if they are raised with them. They are protective and not overly affectionate with most people. The Kishu Ken does need extra socialization to behave properly around kids.

Do Kishu Kens Get Along With Other Pets?

The Kishu Ken is not a dog recommended for households with more pets. They are a dominant breed and are tough, not highly domesticated. This means they have no problem with intensive fights to assert their dominance.

Kishus have an extremely high prey drive and are natural hunters. It is so engrained in their genetics that they won’t be able to understand how to stop this urge. It means that they will hunt animals smaller than them and can end up killing them. Even dogs larger than them are still under threat.

It is imperative to socialize these dogs from as early an age as possible.

Things to Know When Owning a Kishu Ken

The Kishu Ken is only a medium-sized dog with average exercise requirements. They do not have a voracious appetite, only needing between 2-3 cups of food each day.

The Kishu Ken has had a particular and limited diet in Japan for many centuries. All of this has developed their genetics in a specific way, and they are prone to allergies. Feeding them a diet of high-quality dog food with limited ingredients can help with this.

The most common allergies in the breed are grains and potatoes. Since these are the most common sources of carbohydrates in dog food, you might consider feeding them a raw diet that you prepare yourself.

Kishus need daily exercise on top of mental stimulation. They are a pup built for long runs on the hunt. It’s better for them to get high-intensity and focused workouts rather than simply being let out alone in a yard or going on daily walks.

If allowed to grow bored for too long, they quickly become master escape artists. They can promptly dig their way out of almost any enclosure if given the opportunity. Instead, alternate daily walks with other adventures that introduce them to new areas or activities.

They make excellent hiking companions and enjoy receiving a new toy. Get them a dog puzzle to distract them while they relax in the home. Make sure they receive at least 30 minutes of exercise every day.

Training these dogs can be both a challenge and a walk in the park. They are incredibly stubborn when it comes to doing things that they do not want to. This is why their owner or trainer needs to take the time to get to know them. They need to find out what motivates them.

These things could be something simple like a favorite food that you can use during training or a toy that they find especially interesting. This toy could only be given as a reward for a finite period after a successful training session.

Kishu Kens are easy to housetrain because they do not like a mess in their space. Ensure that they regard the entire house as their area, and they will refuse to use the bathroom in it. Kishus do have several quirks that need focused training, like hunting tendencies with other animals and expressing dominance.

They are highly intelligent dogs. Kishus enjoy solving problems. If possible, get creative with training and make it into a puzzle that they can figure out.

The grooming for the Kishu Ken is one of the most manageable parts of their overall maintenance. They do not shed much until the spring or fall. They do have a double coat. The undercoat sheds out seasonally, and you will want to groom them more frequently to reduce the amount that they shed around the home.

Beyond these times of the year, brush them at least once weekly. They do not tend to get tangles or mats. Only bathe them a couple of times each year to protect their skin. Trim their toenails if they need it. An easy sign is if you can hear them clicking on the floor as they walk.

Otherwise, clean out their ears at least once a week and brush their teeth multiple times to prevent tartar buildup.

Their tendency for food allergies is the most significant health concern for a Kishu Ken. They can exhibit symptoms, including dermatitis or ear infections, as a result of these allergies. Otherwise, anything else can be discovered by a vet during annual check-ups.

There are no recognizable differences in the personalities or sizes of males and females in this breed.

Kishu Kens are difficult dogs to locate outside of Japan, although there is a devoted following in pockets around America. If you do find one to adopt, then be prepared to go the extra mile for these pups.

Kishus are the perfect match for an active hunter who doesn’t own any other pets. They can get along with families well, although it might take extra socialization.