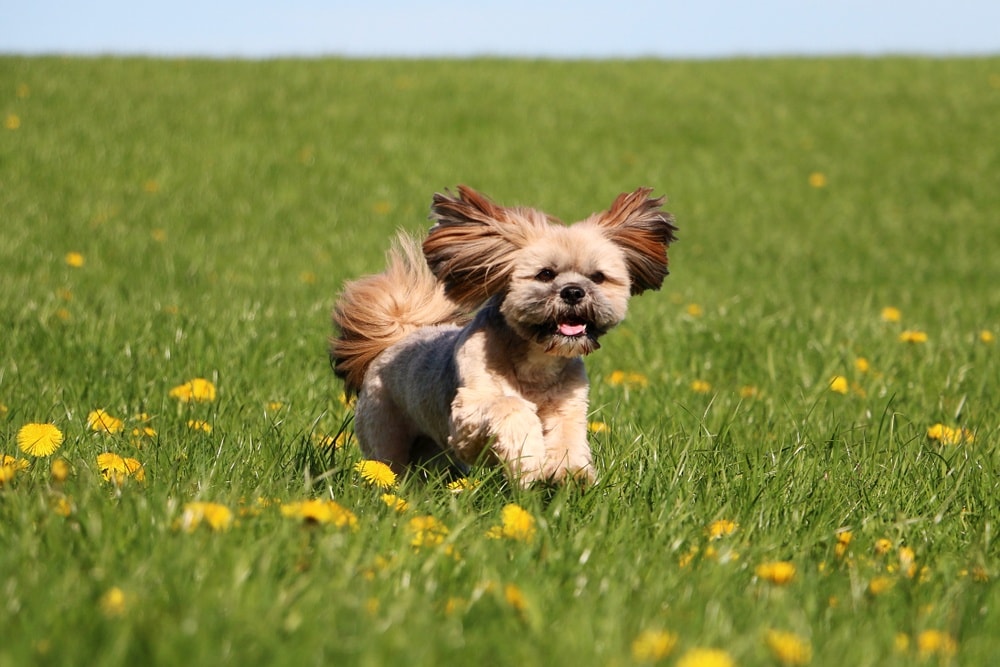 The La Chon is a mixed breed, crossed with a Lhasa Apso and a Bichon Frise. Since it is a designer dog mixed with two purebred dogs, a La Chon can combine both of their traits and characteristics. Since Lhasa Apsos are often used as guard dogs and Bichons are a classic toy dog, there is quite a range of temperaments that can come out in a La Chon. Although most people would think that the combination might end poorly, it generally makes for an amiable but highly loyal dog.

La Chons are known for being happy and lovable pups that are friendly with their family. They only have a moderate amount of energy for a little dog, which makes them an easier pet to maintain. As with all designer dogs, if you want one of these puppies, you will have to be careful what breeders you get them from, since designer dogs can be bred for all the wrong reasons by low-quality breeders.

Lachon Puppies — Before You Get One…

1. One parentage line helped Buddhist monks in the Tibetan mountains.

There is not much history behind the La Chon breed because it was only recently crossed and bred for higher demand as a designer dog. The Lhasa Apsos, however, make up for this because they have thousands of years of history in their parentage.

Lhasa Apsos are thought to have initially been used by Buddhist monks high in the mountains of Tibet. They were set as sentinels to guard the temples and the monasteries of the mountains. Their ancestry further back than this gets a little fuzzier, with some believing that they may have come from Tibetan Terriers. However, there have been studies that test the DNA of these dogs, and there are also theories that they may have partially descended from mountain wolves. They have the long hair meant to insulate them well in frigid temperatures.

They were useful as guard dogs because they have a significant judgment capability. This skill helped them to know if it was a friend or foe approaching a monastery. Because of their service, they earned great respect in Tibet and were never bought or sold. However, the Dalai Lama would give them as gifts to visiting Imperial families and dignitaries. Through this practice of gift-giving, the dog made its way to the U.S.

2. Bichon Frise found their way into popularity across countries.

Not only does the Lhasa Apso have a long and exciting history, but the Bichon Frise does as well. Although many believe that the Bichon has been around since the time of Christ, many others believe that this dog is a descendent of the old Maltese, Barbet, Water Spaniel, or even the Poodle.

Wherever they initially came from, we do know that they come from regions around the Mediterranean. They were initially divided into four different categories, mostly dependent on exactly where they were found. They were popular in Spain and were brought to the Canary Islands and Tenerife. They were “rediscovered” in the 1300s by Italian sailors who proceeded to bring them back to Italy, where they became a beloved pet of the nobility. The breed spread to France during the Renaissance and became popular there as well, earning its French name.

The younger that you can buy a La Chon, the better and faster it will form bonds with the family that adopts it. Due to their strong streak of loyalty, these dogs build relationships with people from a young age. These bonds are hard to break and make any transitions more difficult for a La Chon dog who has lived with the same people for most of its life.

Temperament & Intelligence of the La-Chon 🧠

A La Chon can look like a teddy bear, which is fitting because this happy little dog often loves to cuddle. Both of their parents are known to be intelligent, meaning this usually gets transferred down into the adorable La Chon puppies. Their intelligence, combined with their sweetness, makes them quite easy to train. Their parents, the Bichons, were used as a circus dog toward the end of the Renaissance because they were so easily trained. Unlike the Bichons, La Chons have an easy-going temperament and don’t get irritated quickly, not snapping unless heavily provoked.

Most La Chon puppies have inherited the judgment that made the Lhasa Apsos so valuable in Tibet, and they can tell if someone is emotionally distressed. They will try just about everything they can to try and comfort someone who is sad. This genetic inheritance is also why some of these dogs may be quite wary of strangers, barking if someone new approaches them. This attitude can be trained out of them with consistent effort.

Are La-Chons Good for Families? 🏡

These pups are perfect fits for most families because they are so sociable and laidback and form strong bonds from such an early age. Although all dogs should be supervised when spending time with very young kids, the La Chon generally helps parents to feel relaxed with them being around their children.

Do La-Chons Get Along With Other Pets? 🐶 😽

The breed is often relaxed around other pets, although it helps to socialize them early on. They can be well-behaved with both other dogs and cats, although some barking may occur with a new introduction to the family.

Things to Know When Owning a La-Chon

Since La Chons are so small, they often need little food a day and are quite low maintenance when it comes to a food budget. They typically only need about a cup of food each day, although active pups may need closer to two. Don’t free-feed them, but give them a schedule where they are fed two or three times a day. They will be happy to adapt their eating schedule to yours.

These pups can be quite active for their size, although they are considered a toy dog. They should be walked or allowed to get consistent activity for at least 30 minutes each day. Since they are quite intelligent, it is best to combine their exercise with mental stimulation.

La Chons are easy to train because they come from two breeds that are known for being intelligent and eager to please. Since they are keenly able to sense the emotion of their trainers, you must stay calm and collected during training. Use a firm hand to train them and a consistent script of commands, with everyone in the home knowing what each specific one means. Don’t be harsh with them, as this can cause them to shut down or feel poorly. Positive reinforcement goes a long way with these willing little dogs.

Both of the parental breeds have a large amount of hair that needs to be clipped consistently. Although the La Chon does not require much grooming, they do need to be brushed regularly to keep them from getting tangles or mats collecting in their fur. They have naturally long hair that can be trimmed periodically to keep them looking neat and tidy. It also helps to keep the hair out of their eyes, which can collect dirt and lead to disease if not properly cared for. If they get long hair in their ears, these should be plucked, and the ears should be consistently cleaned. As with all other dog breeds, these dogs should get their teeth brushed multiple times a week and their nails trimmed regularly.

As you can see from the relatively short list of diseases that commonly affect these dogs, they are usually a healthy breed. Most of this is down to the parents’ health because they are both close to being disease-free breeds. Still, be sure to take them into the vet for regular checks to be able to catch anything early on. These visits can be especially beneficial as they become older, as they can commonly suffer from kidney problems and perhaps a loose bladder.

There are no noticeable differences between male and female La Chon. At the most, a male might weigh slightly more than a female, but only if they inherited a thicker build from their Lhasa Apso parent.

Families looking for a lovable pet with whom they can feel at ease around their kids or singles and seniors who find themselves wanting a companion will appreciate having this little dog. They are easy to train and can be quite engaging for their owners, with their expressive little faces and large personalities. On top of that, they are typically one of the more affordable designer dogs to bring into your life. They can show off new tricks at every dinner party and then be a cuddle monster at night, all in one fuzzy little package.