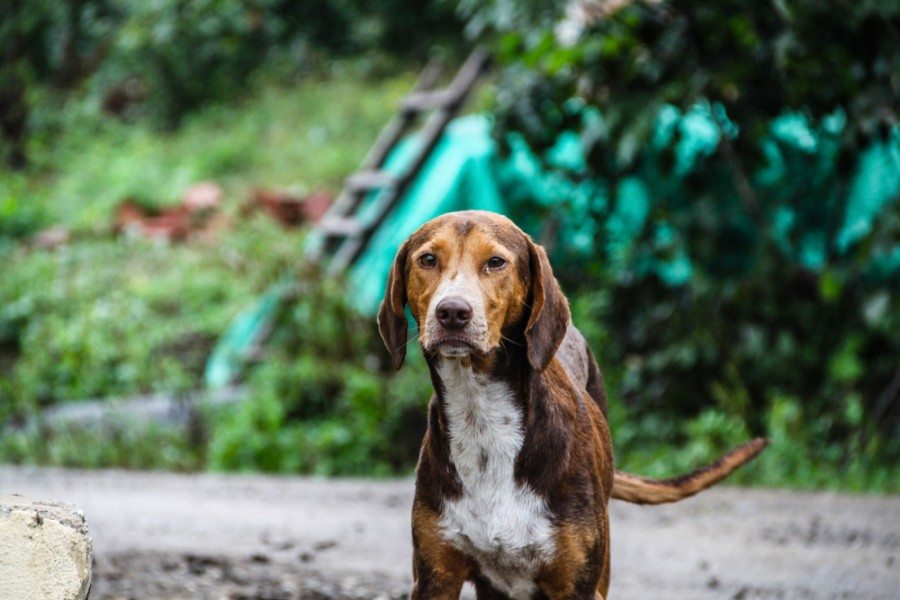 This hybrid breed is relatively new to canine history, so here is a closer look at the origins of the two parent breeds: the Labrador Retriever and the Bloodhound.

Labrador Retrievers were bred as hunters and water retrievers in the early 19th century. They were a mix of Newfoundlands and various breeds of gun dogs and became their own distinct breed by the mid-19th century.

These happy dogs are the most popular dog breed in the United States and are still used for jobs like hunting, detection, search and rescue, and service animal work.

Bloodhounds are believed to date back as far as the 7th century. Early Bloodhounds were white or black; the whites called Southern hounds, and the black dogs called Saint Huberts. Around the 12th century, Bloodhounds became popular with Christian officials and monasteries that kept the bloodline pure for centuries.

Continual development of the breed took place in the early 19th century in the United States, where they were used as hunters. Although Bloodhounds are not commonly used for hunting today, they are favored by law enforcement for their superior tracking abilities and kept as companions.

Labloodhound Puppies – Before You Get One…

Puppies are, let’s face it, some of the cutest creatures imaginable. And Labloodhounds hit an especially coo-inducing spot with their pleading, soulful gaze and floppy ears!

But don’t let those puppy dog eyes reel you in before you are ready to bring a dog into your family. Before taking the plunge, consider the answers to questions like these:

Why do you want a puppy? Companionship, or perhaps a hunting partner or farm dog?

Are you financially, physically, and emotionally capable of caring for a dog for the next dozen years or more?

Does your schedule (or that of your family’s) have the flexibility to accommodate a dog’s outdoor bathroom, exercise, and play needs?

Is your living situation a good fit for a large, active dog?

1. A Labrador Retriever Once Won a Mayoral Election in California

Well, technically “honorary mayor,” but still a win! In 1981 a Labrador Retriever named Bosco beat out two human candidates for mayor of Sunol, CA. Though the city only allowed him to become the honorary mayor, this “RePUPlican” retained his title until his death in 1994.

His unbeatable campaign slogan? “A bone in every dish, a cat in every tree, and a fire hydrant on every corner.”

2. Bloodhounds Have the Best Noses in the Canine World

Of the many scent hound breeds available, the king of tracking is indisputably the Bloodhound. Their nasal passages are the largest of any dog, and they can detect even as few as one or two scent cells. For reference: humans have around 5 million olfactory receptors — Bloodhounds have over 4 billion.

They are especially favored for tracking down humans for search and rescue or law enforcement purposes. If you’re a lost child, you definitely want Bloodhounds out looking for you… but if you’re an escaped convict then these are the last dog you want on your trail!

Labloodhounds are a mix of two intelligent, highly skilled dog breeds and it shows! These dogs can do nearly any job in the canine world: hunter, game retriever, watchdog, tracker, therapy dog, service animal, search and rescue, and more!

Try out many different types of activities with your Labloodhound, and you’re sure to find many that they excel at and enjoy.

Temperament & Intelligence of the Labloodhound 🧠

The Labloodhound is an incredibly social, outgoing, and big-hearted canine. It is exceptionally playful and loving with children and makes friends with strangers easily. If you give this pup plenty of room to roam you will have an enthusiastic and good-natured companion for a family or active individual.

A Labloodhound also makes an excellent hunting companion and work dog, due to its keen nose and enjoyment of working with humans. Though it is often a very vocal dog, a Labloodhound is usually just too sweet to make a good guard dog.

It is also a very smart and sensitive dog breed. Smart enough to learn a variety of jobs and skills like tracking and retrieving, and also smart enough to be a little headstrong and stubborn at times!

Labloodhounds are famed for their friendly and gentle demeanor with children. These dogs love all the attention they can get from families and are almost never aggressive. Though generally gentle, Labloodhounds are quite large; supervision is advised with small children that could get knocked over.

But every dog has its own personality, just like every kid. Early socialization of both dog and children is the best way to ensure an easygoing and respectful relationship!

Similar to their demeanor with children, Labloodhounds make friends easily with other dogs and pets. They rarely chase and antagonize cats or smaller dogs and are fairly laid back.

Socialization of your Labloodhound puppy with other dogs is never a bad idea though — the more time they have to learn to communicate with other animals the more harmonious your multi-pet house will be.

It is highly recommended, however, that you carefully supervise any interactions that your Labloodhound has with prey animals and smaller pets. Even a gentle giant can get too excited and give chase or play too hard with a small creature. Better safe than sorry!

Things to Know When Owning a Labloodhound

A big dog is a big responsibility. Bringing a Labloodhound into your life will mean many changes, so we’ve compiled this section of care and upkeep tips to help you better understand how to keep your dog in the best of health.

With the complexity and variety of nutrients that dogs need to grow strong and healthy, most find that a high-quality commercial dog food serves both owners’ pups and their wallets well.

Big and active, Labloodhounds are dogs that require a fair amount of good fats and healthy proteins to stay fueled for their adventures. When choosing a dog food, make sure that the sources of protein and fat come from named ingredients. Stay away from unidentified meat by-products and blood meals!

Labloodhounds can have trouble later in life with joint pain and arthritis, so check in with your veterinarian regularly about your canine companion’s weight.

These dogs are big, muscular, and active canines! They fare poorly in small, enclosed spaces and do best in a larger house with surrounding land or a fenced-in yard. Large dogs in a small home is a recipe for smashed knick-knacks and chewed shoes.

Labloodhounds need multiple, hour or longer opportunities to exercise outdoors per day. They require a fairly active owner and will love going out with their family for long hikes, swimming, or runs.

With their inquisitive noses and cheerful desire to meet everyone, it is important to train at least basic obedience commands with Labloodhounds. They are big, intimidating looking dogs and love to follow scents. A strong and dependable recall will keep them safe and out of trouble.

Depending on which parent breed your Labloodhound favors, training may be easy breezy or quite a challenge.

The Labrador Retriever lends a diligent, eager to please personality that relishes training with their owner. The Bloodhound, on the other hand, is both stubborn and sensitive about being told what to do.

Wherever your Labloodhound falls on this spectrum, be sure to exercise considerable patience, gentle words, and firm but positive reinforcement.

If your pooch is a real hardhead, try working with a professional dog trainer that does solo client coaching. The one-on-one approach often works better than large classes for stubborn dogs.

Labloodhounds are medium shedding canines that require little in the way of grooming. Their coats are short and may get a dense, water-resistant texture from their Labrador Retriever parent. Brushing a couple of times a week and the occasional bath is the most you’ll need to do for this easygoing pooch.

Bloodhounds are more prone to ear infections, so proper ear hygiene is of particular importance to the Labloodhound. We recommend swabbing your pup’s ears of dirt and wax every few days and flushing them with saline or an ear solution once a week.

You will also want to check your dog’s toenails every week or two, though the energetic and outdoorsy Labloodhound rarely needs help wearing down their nails.

Many vets also encourage brushing a dog’s teeth 3-4 times a week to promote tooth and gum health, as well as fend off gum disease.

Labloodhounds are a solid and able breed. Hybrids, or “designer dogs,” in general are actually less likely to develop health problems than purebreds.

However, as a Bloodhound Lab mix, Labloodhounds can also fall victim to any of the health concerns that either parent breed is prone to. Here is a list of all the conditions and health issue that may arise in a Labloodhound:

Your male Labloodhound is, on the whole, a taller and heavier dog. Males are also more inclined to dominance asserting sexual behaviors like humping, as well as marking territory with their urine.

Females are a little smaller, though still large dogs, and more likely to be sensitive and shy.

So, is the Labloodhound right for you?

If you live in a cramped apartment or have no interest in an engaging and active relationship with a dog, then perhaps not.

However, those with a love of the outdoors who are willing to learn how to communicate with these upbeat, smart pups will find a true friend in the Labloodhound!